Paleontologist emphasizes the importance of nature in our world today 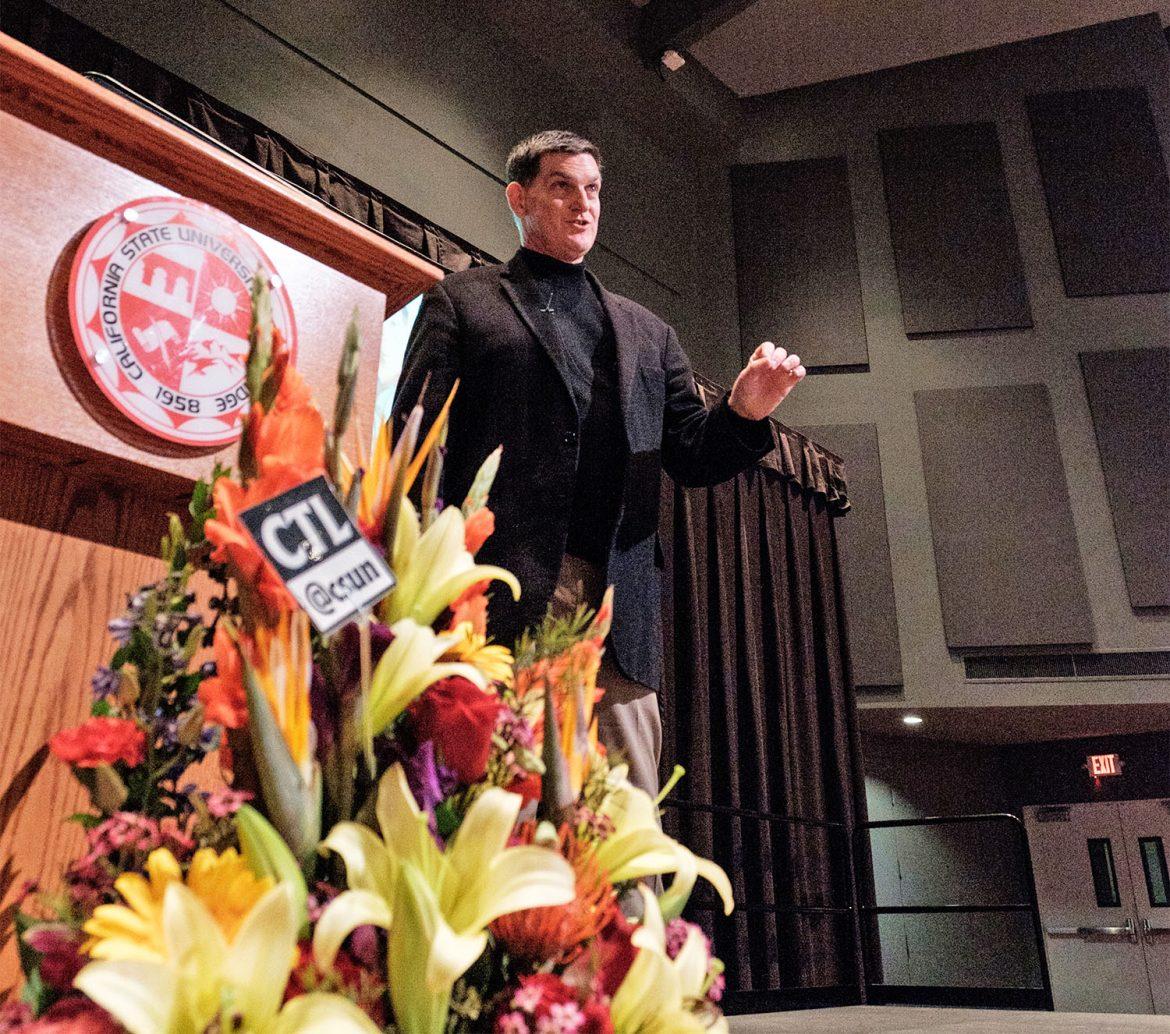 Dr. Scott Sampson giving a lecture and talking about his new book "How to Raise a Wild Child" at the Education on the Edge, Speaker Series event at CSUN. Photo credit: Blake Berry

Dr. Scott Sampson discussed the importance of children experiencing nature and his book “How to Raise a Wild Child” Monday night in the USU.

Sampson is a dinosaur paleontologist, the author of multiple books and the host of “Dinosaur Train” on PBS.

Sampson said the relative distance of children and nature is one of the biggest crises in our world today. Children need to experience nature and build an emotional connection to it. Free play, or time outside without adults leading activities, is absolutely critical.

“The average child spends seven hours looking at a screen every day,” Sampson said. “Teens usually spend about ten hours a day. They multitask and look at multiple screens.”

Moreover, he also said children today can identify thousands of corporate logos, but not many plants native to where they live. The new generation has an indoor migration.

The experience of free play is going extinct. According to Sampson, our generation is probably the last to experience this.

He asked his audience to close their eyes and think of a place they’d like to go as a child. He then told everyone to open their eyes and asked how many people’s visions were outside. The majority of people raised their hand. Sampson said this ratio will be the opposite.

This issue can also be related to health concerns. Sampson said the life expectancy of children today is lower than their parents’. This is due to obesity, diabetes, depression, etc. which relates to the average child spending seven minutes outside a day.

Additionally, Sampson discussed a concept he called N.E.W., which stands for notice, engage and wonder.

Children should notice the nature around them. An example of this comes from knowing about the history of human beings. They would rely on nature to survive, such as knowing a predator is coming from birds flying a certain direction.

“If you want to blow away a child, take them outside to see the stars,” Sampson said. “Most kids have never seen the Milky Way.”

Next, children must engage with nature. Kids need to be allowed to be creative and free play allows them to do this. Sampson relates the way children differ from adults as caterpillars and butterflies. They are different things who learn in various ways.

Finally, wonder is the natural curiosity that children possess, according to Sampson. Unlike adults, who see most things as a spotlight because they’ve learned concentration, children see the world as very open and see everything around them.

Not only do people need to experience nature, they should realize that they’re not individuals, according to Sampson. He said we have 100 trillion cells in our bodies and 19 million of those are bacteria and fungi. We have coevolved with these organisms.

“There are 800 kinds of bacteria just in your mouth,” Sampson said.

After the event, audience member Vanessa Yniquez said she reflected on her own experiences as a child. She is also thinking about how her relatives raise their kids.

“I feel like I need to report back to my brother and tell him what I’ve learned. His two children can’t just take a screen out while we’re having dinner,” Yniquez said.

She also said she feels like she has missed out on connecting with nature because of the way she was raised. She wants to incorporate this connection with her children in the future.

“Now after this lecture, I actually want to go camping and experience that for the first time, but maybe in a cabin,” Yniquez said.

Audience member Justinne Hernandez said she feels like she has a new perspective of nature after listening to Sampson. She said adults should make an effort to incorporate nature in the lives of their children.

“When you’re outside you just feel better, because like he said, we’re a part of nature. We need to stop thinking of ourselves as separate from nature,” Hernandez said.

Sampson said to find something you like to do outside and bring your child.