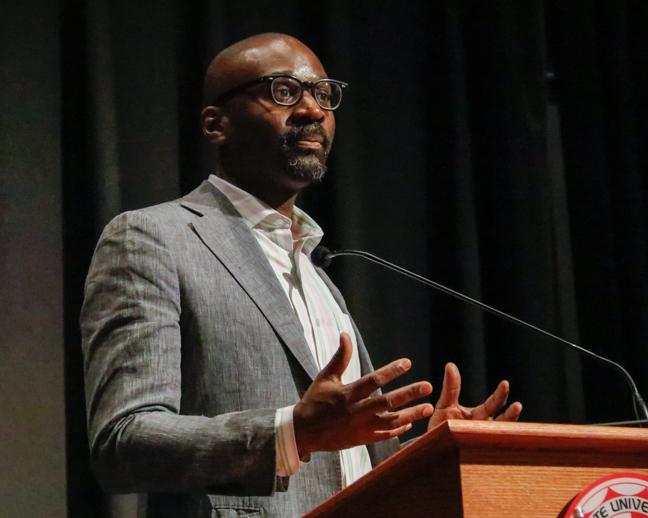 Dr. John L. Jackson from the University of Pennsylvania discusses the nature of social justice, power and privilege in a post election culture on April 5, 2017 at the Northridge Center. Photo credit: Luis Garcia

CSUN welcomed anthropologist and activist Dr. John L. Jackson Jr. on Wednesday, who spoke on the importance of diverse opinions in the current political climate.

Jackson is the author of several books on race relations, including “Impolite Conversations: On Race, Politics, Sex, Money, and Religion” and “Harlemworld.” He is a professor at the University of Pennsylvania.

Jackson stressed the importance of how humans listen to alternate views as a key factor in promoting racial understanding in his lecture.

“We tend to believe that we can intellectualize ourselves out of our problems,” Jackson said. “Part of our job is connecting the intellectual, the analytical, the conceptual to the effectual, the emotional.”

With regards to diversity, Jackson said that it is our diversity as a species that makes us strong, and compared a world without complex lenses to the cybernetic-organic species the Borg from the television series “Star Trek.”

“Who we are in an existential way [would be] gone,” he said. “We have to get out this idea that the problem we have… is difference. Part of what it means to be human is to keep secrets, to be able to communicate.”

Jackson said that we also “talk too much about race in general,” which he called senseless when the people involved in the conversation are not able to convey a mutual basis for understanding.

“We’re going to have to create a mechanism that makes it safe for us to be uncomfortable with one another,” he said. “Talk isn’t enough if it’s the way we’ve taught ourselves to talk in modern discourse.”

In a new era of political polarization, many in the audience had questions about how to promote understanding in the classroom and among family and friends. Jackson’s explanation was that today’s polarization comes from the “global village” that has developed in the digital age.

“The world is so small,” Jackson said. “This is all about what kind of global planet we will be.”

The event was organized by the department of social and behavioral sciences and took place in the Northridge Center.

“I think it’s really important… not to be convinced to blind ourselves,” Jackson said to the audience.