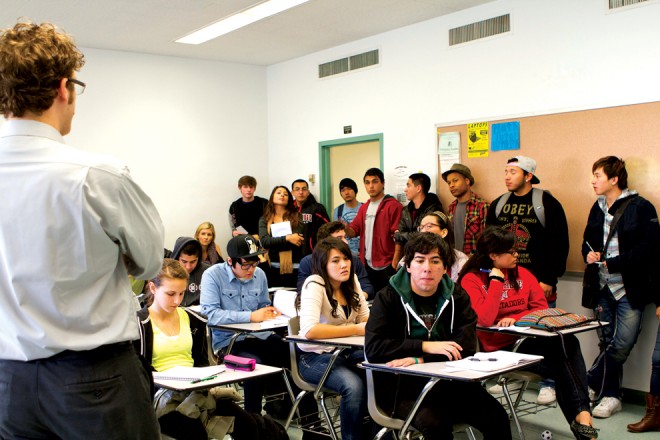 Robert Gressis, philosophy department faculty, addresses his philosophy 150 class in Jerome Richfield Hall on Tuesday. Gressis said he has a waiting list of 42 students trying to add the two available spots in his class. File Photo/ The Sundial

The philosophy department at CSUN will be hosting their 8th annual student philosophy conference.

Abel Franco, a professor who teaches philosophy, said the idea of the conference is to get students prepared for an actual professional conference.

“It’s a day where we have students and professors doing something together,” Franco said. “We don’t have any other day like this.”

Franco said the papers are what students want to explore.

“Here they are presenting their ideas to others and getting feedback as we do in conferences,” Franco said. “Some will not go very far, but the experience shows that they take this as an important moment in their lives.”

Students who want their papers read must submit a two page summary that includes a main argument, a thesis and the sources they have used. Shortly after, they are given a notice if their paper is chosen or not.

This year’s conference will consist of six papers, and students will have 50 minutes to present their paper. Professors will then provide a discussion based on their work.

The conference will also include the work of English and computer science majors, according to Franco.

“It’s very difficult to advertise outside of philosophy,” Franco said.

In addition, a former philosophy student will be invited to talk about their life post-college and how philosophy has made an impact.

Not only will students have an opportunity to experience a conference outside of school, they can have time with other students and professors from the philosophy department, according to Franco.

“I think the first thing they get is their responsibility of presenting in public their own ideas to people who are interested in their ideas,” Franco said.

Some paper topics include feminist philosophy, ancient views of the soul/mind and artificial intelligence.

The conference will be located in Sierra Hall’s Whitsett room, on April 14, at 8:30 a.m.