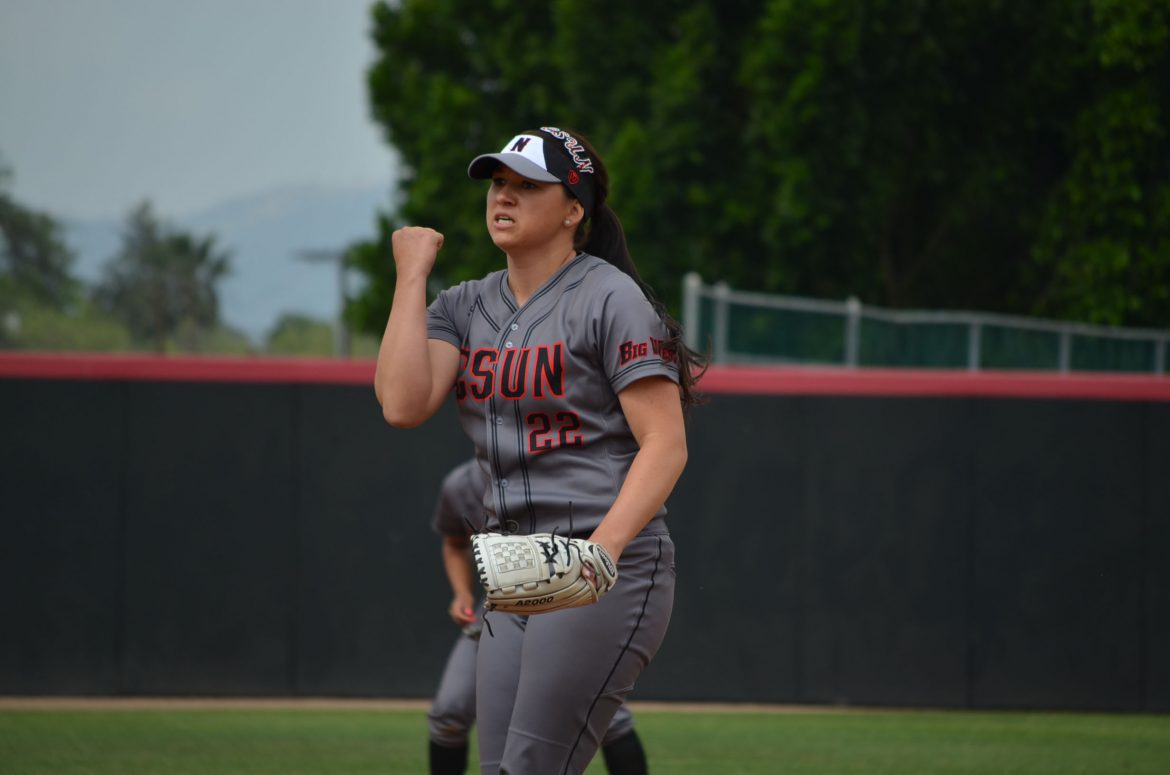 Senior Daphne Pofek, #22, started on the mound for the Matadors. Pofek gave up two home runs in the first game against the Murray State Racers on Monday, March 20, 2017. Photo credit: Anthony Martinez

In the first game, CSUN got off to a fast start when Glover led off with a single and stole second. First baseman Katie Hooper brought her home with a RBI single to give the Matadors an early 1-0 lead.

In the second inning they added another run when a single, error and fielder’s choice loaded the bases with one out. Designated hitter Taylor Nate drew a bases loaded walk to earn a RBI and extend the lead to 2-0.

After a quiet third inning, the Matadors doubled their lead In the fourth as Tara Kliebenstein led off with a single and was brought home when Glover launched a two-run home run to right field. The team added another run in the sixth on a RBI ground-out by Jessica Alexander.

The Rainbow Warriors were able to bring home two runs in the fifth, but were otherwise dominated by Matador pitcher Pofek. She tossed a complete game, allowing only those two runs and six hits to earn her 10th win of the season.

CSUN got off to another fast start in the second game of the doubleheader. Nate singled and advanced to third on an error to open the game, and Glover brought her home with a sacrifice fly for an early 1-0 advantage.

Hawaii responded quickly when first baseman Heather Morales opened up the second inning with a solo home run to tie the game at one.

In the bottom of the third, Karlie Habitz led off with a single and was advanced to second on a sacrifice bunt. The Matadors capitalized on the opportunity one batter later as Glover came through yet again, this time with a RBI single up the middle to break the 1-1 tie.

CSUN got another run of support in the fourth when a RBI single from Habitz brought home Mackenzie Babbitt to extend the lead to 3-1. That was all the scoring the Matadors needed to seal the victory.

Pofek threw her second great outing of the day, allowing just two runs in another complete game outing to earn win number 11 of the season.

The back-to-back wins give the Matadors their third and fourth straight wins. They are now 24-13 on the season and 11-2 at home.

The team gets the week off before another doubleheader against U.C. Santa Barbara next Friday. First pitch of the opening game is at 1 p.m.