Culture a la Aztlán: The unique sound of Mexican Dubwiser 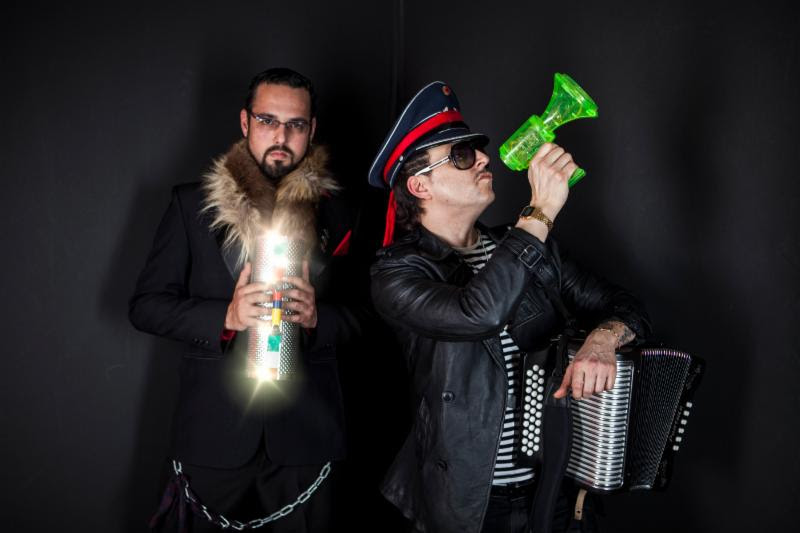 Dressed in black suits and squared sunglasses with dominative postures, Marcelo Tijerina and Ulises Lozano appear together for the first time on the cover of their newest album “Border Frequency.”

The duo known as Mexican Dubwiser continues the experimentation of their unique sound, combining the famous Latin-American musical genre of Cumbia with electronic music, hip-hop and reggae.

Producer, DJ and creator of the Mexican Dubwiser project Marcelo Tijerina spoke with The Sundial about his newest album, the fusion of genres, and the people the duo collaborated with to create “Border Frequency.”

What was the process like for creating “Border Frequency?”

Tijerina: We did what we have been doing on the past two albums where we didn’t have different vocalists on each track. Our main base is Los Angeles but we consider Mexico City to be our second home. We worked together with Tito Fuentes of Molotov and we were able to work out ideas with him, then go back to the studio in L.A to mix the final ideas. We’re always traveling and we’re happy to collaborate with all these artists.

Apart from Tito Fuentes of Molotov, who else did you collaborate with?

Tijerina: We have a track with Money Mark. He produced several of the Beastie Boys’ albums. He’s also worked with Molotov in a couple of tracks. Money Mark is a legend in the music industry. We also invited Randy Ebright from Molotov as well. [Vocalist] Myron Glasper worked with us on the last album and came back to help out on this one.

Is there anything different in your third album that’s completely different from the first one?

Tijerina: The first album had a lot of demos, in the second one we tried to get the sound together, and this third album is more ambitious. They all have the same sounds but none of them are exactly alike.

You released the music videos for the singles “Lecture Me” “La Gran Ciudad” and “Get Up,” but why did you decide to use simple video cameras to film them and not aim for a higher production like in your past music videos?

Tijerina: We decided to do little indie videos for all of the songs. We just said ‘let’s do something where we don’t spend so much money and make it a little funny.’ We did a little trilogy with “Get Up,” “Lecture Me” and “Nobody’s Perfect.”

Where does the name Mexican Dubwiser come from?

Tijerina: We were looking for a catchy name. Coming from Mexico and being the wisest DJ with cumbia, which is like the reggae for Mexicans, the name ‘el mexicano sabio del dub’ became Mexican Dubwiser. It was basically playing with words.

What led you to base your studio in Los Angeles and not in Mexico City or Monterrey?

Tijerina: I was invited by the people of La Brujeria to help them with their record label in L.A. At first I was working live shows for them in Mexico but they saw that I was working well and told me they needed me back in L.A.

How early did you start working in the music industry?

Tijerina: I was fifteen years old. I started working with Control Machete. That’s how I started meeting artists and tour with them. This happened during the late nineties and early two-thousands. By seventeen I was Djing from Sunday to Sunday in different bars and nightclubs of Monterrey.

How did you and Lozano start collaborating?

Tijerina: Well, at first I was struggling. I needed help to produce the first album and I went to Ulises. He became part of the band, eventually, because of the cool musical chemistry between us. At that time [2011] I was opening for the Kinky shows here in the U.S.

Are you working on any future projects or live shows?