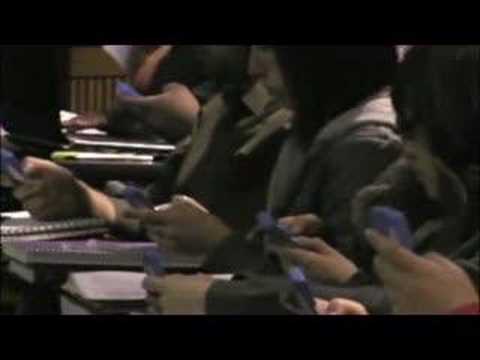 The students in Deone Zell’s Management 360 class were armed Monday night with more than just textbooks, pens and writing paper.

The newest weapon in their educational arsenal? The Response Card XR, more commonly referred to as “the clicker.”

If you’ve ever watched the television game show, “Who Wants To Be A Millionaire?” you will understand the concept. On that show, the audience is often asked to help contestants decide how to answer a question using a handheld device to input their answers. The tally of the various answers is shown on the big screen.

That’s exactly how it works in the classroom, Zell explained.

Interspersed throughout her PowerPoint presentation are questions that help Zell gauge not only whether students are paying attention, but how well they understand the material.

“It’s totally anonymous,” she said, “But you immediately see on the screen the number of students who are responding to each choice. It gives students a voice.”

The feedback is invaluable to Zell whose Monday and Thursday night lectures in Noski Auditorium each have as many as 166 students.

Aside from the educational value, the system also makes classroom management more efficient. Taking attendance via clicker requires just a minute or two. Scantrons are a thing of the past, as students simply input their answers to quizzes and tests through the response card.

“I can get students their test results the next day,” said Zell. “It’s more effective and I don’t need a T.A. to grade them.”

However, there’s always a price for innovation and efficiency and with Matador Bookstore selling new clickers for $62.25 (they’re $46.75 if you can find a used device), some students are not pleased they’re the ones paying that price.

Three students responded to an e-mail requesting information about their experience in Zell’s fall 2007 class. While all of them had some positive comments about the ease of taking attendance and the “fun factor,” they all referenced concern about the cost.

Brian Mitchell wrote in his reply, “?it’s a pretty expensive device for the sake of taking role.” Eriko Miyasato echoed that, writing, “The thing that upset most students was the fact that the clickers cost around $60 to $70?Yeah, it was an interesting experience, but I can’t say that I’m too happy with the results. If the clickers did work properly, it may have been a different story.”

Zell said that was the first time she used the clickers in class and not only were there some technical glitches with the clickers themselves, but she admits that she was dipping her toe in the water, using them primarily for attendance and tests.

“There’s a learning curve,” she said.

As far as the cost of the device, Zell said she is working on that. She created a custom textbook this semester that cut $30 from the student cost (to $134 new/$100.50 used), and also made her students aware of an online textbook that is even less expensive at $80. The clickers can be sold back to the bookstore when the semester is over, just like textbooks.

But the biggest problem, she said, is the markup added by Matador Bookstore, whose cost for the clickers is just $45, according to the manufacturer.

Mike Muntean, an account executive for Turningpoint Technologies, the company that makes the clickers, said that the markup “is a problem nationwide.” Most college bookstores are independently-operated entities that are required to operate at specific margins, he explained.

“What we’ve done,” said Muntean, “is we’ve started our e-commerce site. We are setting up a specific URL for each university.” This option will allow students to buy their clickers direct from the manufacturer at the same cost offered to the bookstore, “plus $4.95 shipping,” said Muntean. “It cuts out the bookstore markup.”

Another way to minimize the pain, Zell said, is to have the university specify one device to be used by all professors. Currently, clickers from three different manufacturers are being used by 10 professors, while the entire chemistry department has standardized on a fourth.

Then there’s the question of clicker fraud.

Business major Rad Jahangir said he saw this in the political science class he took last spring. “Kids can take other people’s clickers and sign them in (for attendance) and answer questions for them,” he said. “I saw people doing it. Friends would trade off.”

In that class, he said, they did not use the clickers for exams, sticking with Scantrons for that activity. Everything else, said Jahangir, including attendance and participation, was graded based on clicker input.

When asked whether any safeguards were in place to deter clicker fraud, Zell seemed a bit taken aback, as if the question had never come up before. After taking some time to think about it, her reply was basically no. As far as attendance, she said, “It’s the same problem when you pass around attendance sheets. Someone could sign in for their friend.”

Exams are another matter. Zell said it would be pretty hard to cheat that way. “During exams we proctor, walking around. We also have two T.A.s in the classroom so anyone with two clickers out would be noticed.” And, she added, that since she grades on the curve, “if you help a friend, you hurt yourself.”

Management student Kristin Pinkston said at the start of Monday’s class that she was reserving judgement, adding that she was concerned about tests. “What if I want to erase an answer or something?” she wondered.

But by the end of the night, she was sold. “I liked that I got into the ease of it,” Pinkston said. “I’m not normally one to raise my hand and answer questions. This way, I could participate a little more.”