The unfortunate repercussions of public shaming 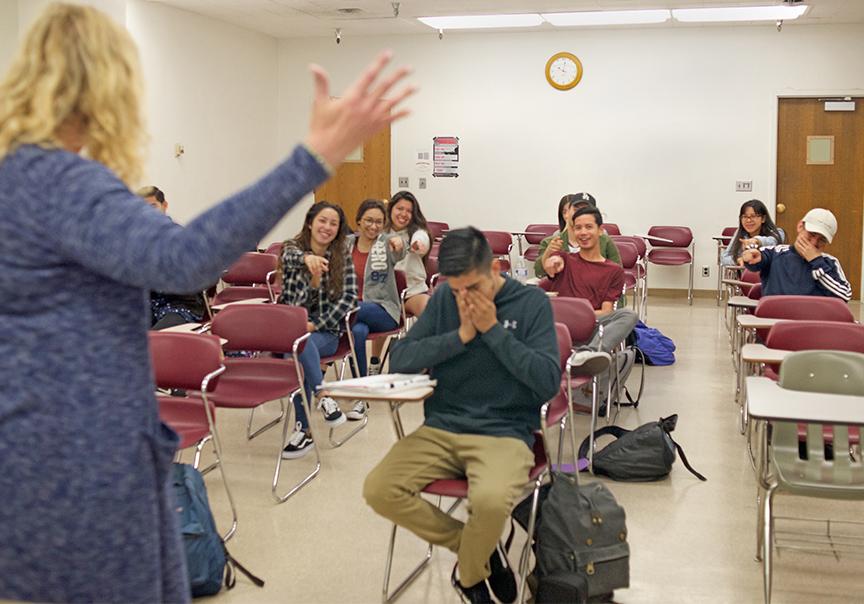 With a concerned look on her face and a low tone of voice, professor Lisa Riccomini shared an unfortunate anecdote of her college days.

“I had a professor in graduate school who ruled by public shaming.” Riccomini said. “He would call out students, attack their assignments, point out what they did wrong and often made them cry.”

It is not rare to hear at least one friend who shares a similar experience. An instance in which the spotlight of humiliation fell upon one student within a second for saying something offensive or for behaving out of “the boundaries of normality” as Jon Ronson stated in his book “So You’ve Been Publicly Shamed.”

However, the public shaming phenomenon is not new. It has been present in social settings for a long time and it is still present among CSUN students to this day.

Joe Gutierrez, a junior sociology major, began wearing glasses when he was in sixth grade. The first week he wore them to school he was ridiculed by his classmates, to the point where he could not stand it.

Gutierrez said that after that first week, he decided he would never wear glasses again, fearing that if he did, he would continue to be humiliated and cast out of his friend group.

He did not wear glasses for six years, up until his junior year of high school. Even though he was visually impaired and his grades suffered, as did his confidence, he refused to let himself be subject to the remarks of his peer group.

“When I got to high school, I knew I had a fresh start, but I still didn’t want to be known as the kid with the glasses,” Gutierrez said.

Ivan Garcia, a junior computer engineering major, recalled a time when he tried explaining to his friends that he hadn’t eaten meat in weeks, but had eaten chicken. This did not go over well, according to Garcia.

Growing up, Garcia had always referred to meat in terms of red meat, such as pork, beef. However, before he could explain what he actually meant, his friends gave him such a hard time to where he did not want to explain what he meant.

The use of social media outlets like Twitter and Facebook have allowed people to express their opinions freely. Sometimes these opinions may be offensive or misunderstood.

Author Jon Ronson explored this evolution of public shaming with the case of Justine Sacco, a previously unknown P.R. agent who was made instantly by a poorly-worded, possibly racist tweet about AIDS.

Many people tweeted and retweeted Sacco, deriding her for her remarks and advocating for her to be fired from her job. While Sacco was on board her flight, Twitter users tracked down what flight she was on and one user waited for her at a Cape Town airport where her flight was due to land.

Sacco told Ronson that she experienced depression, anxiety and a loss of purpose after the incident. After becoming infamous on the internet, her life fell apart and she had no clue how to pick up the pieces.

This is quite the mild form of public shaming, but the tendency to attack before we understand the full extent of a situation is indicative of the mindset that led to Justine Sacco debacle.

Sacco explained to Ronson that the joke which landed her in internet hell was not meant as a bigoted attack on blacks in Africa, but rather a sarcastic social commentary on her white privilege.

However, because of the instantaneous nature of social media, she was trapped in the sky while the world developed a narrative around her that altered her life.

Currently, the discussion over “free speech” on college campuses has been a hot topic, with many people fearing there is too much repercussion to speaking one’s mind. Since many social movements have become widely championed among liberals, opinions that can be perceived as affronts to them are often challenged swiftly and without reserve.

Elizabeth Blakey, journalism professor and first amendment scholar, said that in classrooms, she encourages students to express their opinions without fear of being ridiculed or made to feel shame for their opinion.

“I try to make sure students can share their ideas because that’s how we learn,” Blakey said. “As long as the attacks do not begin to be personal or single out any one race or religion, then I encourage them to have discussions.”

Riccomini also added it’s important to realize that public shaming coming from a professor may not always be personal.

“This is a person who is an authoritative position to belittle and humiliate to get something for themselves, it has nothing to do with the student.” Ricominni said.

According to Riccomini, if it continues to be a problem, the issue should be taken to the department so students can have their voices heard.