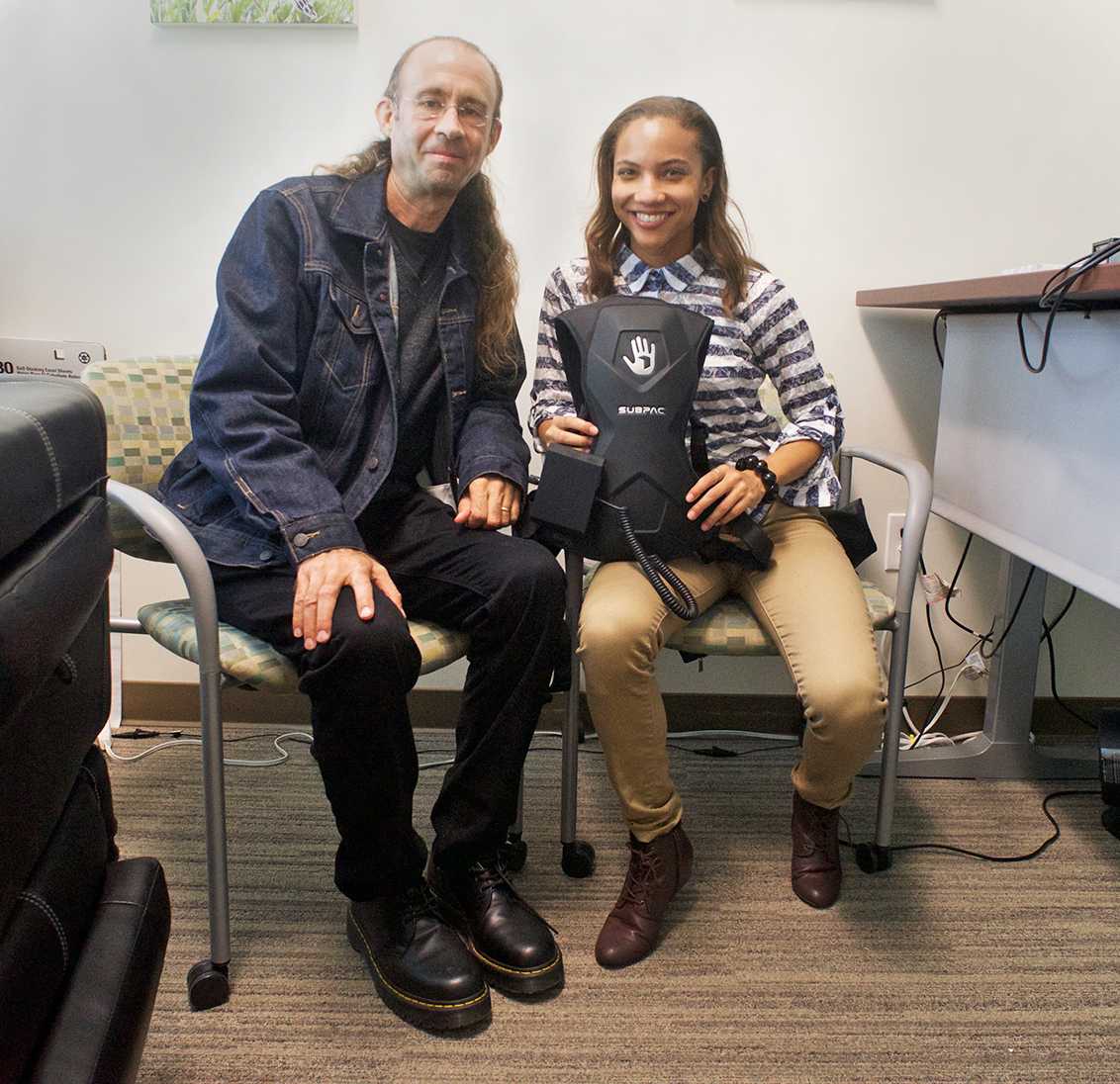 David Boyns and Briauna Johnson proudly displaying the portable version of the device used to produce pulses to the users body while listening to music as a form of healing. Photo credit: Alejandro Aranda

Sociology professor David Boyns and special education professor Ivor Weiner have teamed up to use new technology to share the benefits of sound healing at CSUN.

Sound healing is an ancient practice that is commonly practiced in sound baths, a group experience where sounds are produced to go along with meditation. According to Boyns, meditation can be experienced by a person doing nothing. However, he said in our culture, it’s extremely difficult for a person to do this.

Boyns mentioned a study in which individuals were asked to sit down and do nothing. Researchers found that participants would rather give themselves an electric shock than continue to do this. Sound healing will act as a gateway for people to let themselves become unoccupied.

“Meditation is a stress reduction methodology, but there are barriers, especially for the younger generation,” Boyns said. “We can use other things as gateways with practices that ask people to slow down, which are maybe a little cooler.”

This is where the technology comes in. Boyns described a SubPac, which looks like a backpack and is strapped around an individual. This tool connects to electronic devices, such as a smartphone, with bluetooth or an auxiliary cord. The SubPac produces vibrations that coincide with the music playing through one’s headphones.

“He [Weiner] and I have been exploring different ways to bring healing practices and well-being practices to students on campus,” Boyns said.

One of the team’s lead researchers is Briauna Johnson, a graduate student at CSUN. When it comes to their sound healing study, she conducts interviews and collects data.

“In the future, we want to get some of the athletes here involved and we want to see what their stress levels are,” Johnson said. “We’ll do this with surveys as well as different technology.”

The SubPac and its role in sound healing has various benefits. When an upbeat song plays, the individual starts to feel more energy and happier, and when a relaxing song is plays, one feels less tense. They can also control the intensity of the vibrations being produced with a knob on the left side.

Additionally, the team believes sound healing can also benefit students around the time of finals. They hope to have sessions at Oasis for students to relax with the vibroacoustic therapy.

Senior, Katlyn Kokoszka, is a firm believer in the practice of meditation. She meditates three to five times a week.

“Sometimes we get in our head too much and the way we see the world isn’t always what it appears to be, and it depends on your thought process,” Kokoszka said. “You can turn your world into whatever you want and create opportunities for yourself.”

When told about vibroacoustic therapy, Kokoszka said the energy flowing through one’s body most likely brings the brain to a calmer mindset.

“There’s a lot of different ways to meditate. I think it [the SubPac] would be really good around tests, finals and presentations,” Kokoszka said.

For the research team and Kokoszka, meditation is about the energy a person feels coming in their body and being able to control your mindset.