“Get Out”: An unexpected cinematic experience 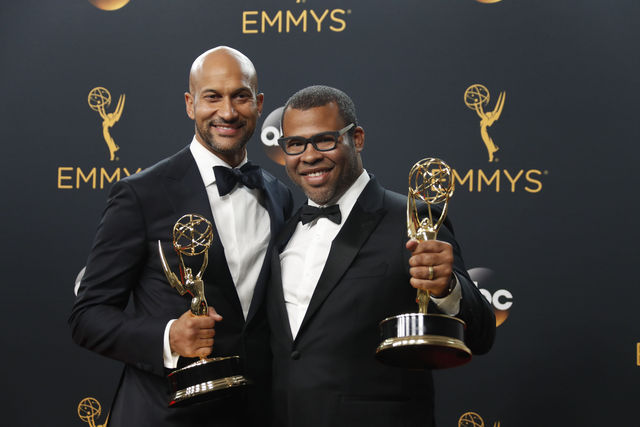 Jordan Peele is a revolutionary visionary for his work in “Get Out.” He reinvigorated the horror genre by telling a story from the black perspective, a point of view that is stereotypically on the side of deteriorating. He displayed everyday situations that would seem terrifying and agonizing to an outsider. More importantly, Peele shed light on microaggressions that the black community experience and magnified these scenarios into a hypersensitive and entertaining movie. “Get Out” shows why these matters should be considered in today’s society, emphasizing race, interracial dating, cultural appropriation and society’s fetishization of the black body.

I didn’t know what to expect going into the movie theater, because so much of the movie’s premise was hidden. When I saw the trailer last year, I was blown away and utterly horrified in the best possible way, with the images of the maid eerily crying when Chris talks about being uncomfortable around a large group of white people.

Although the acting was subtle, it made me feel scared inside. I didn’t understand why or how I was frightened by it, but something stirred inside me. I wasn’t the only one who had an intense reaction to it. Scrolling down my Tumblr dashboard, I saw how black people reacted on social media, screaming from the trailer alone. Along with the black movies that came to the theaters in 2016, this year is beginning to look good for us.

“Get Out” was truly a sight to behold. This was honestly the best movie-going experience I’ve ever had. Peele took the old stereotype of black people being loud in the movie theater and implicitly encouraged it, especially with the use of Chris’ best friend, Rod. I loved every single moment of it. Even though my theater wasn’t as energetic, there were moments that, as a collective audience, we shouted and clapped for Chris. Most wanted to see him succeed.

Jordan Peele said that this movie is a mixture of “Rosemary’s Baby” and “The Stepford Wives (1975)” with each movie being a “social thriller,” meaning that each movie highlighted certain societal situations in order for people to realize how detrimental humanity is behaving. Here is where Peele uses microaggressions to expand the story.

Each microaggression in the film was made by various people at the party, directed towards Chris. Microaggressions, for any person of color, can initially seem as though they are entirely innocent. However, these indirect actions set up a type of racial paranoia in a person’s mind, making one constantly question the actions of those around them. In my experience, I have been the target of microaggressions that varied from “You’re pretty for a black girl” to “You’re not like other black girls.” Back then, I passed those comments aside, or took them as compliment. By realizing what these phrases meant and understaning the mentality behind them, I could see them for what they truly were.

In the film, these microaggressions are displayed as one woman asks Chris’ girlfriend, Rose, “Is it better?,” insinuating that having sex with a black man is better than any other man. This refers to the sexual fetishization of the black male body and the viewing of it as both aggressive, yet desirable, which makes the person feel like a threat, but also reduces the body as a sexual object. Other instances involve a man commenting on how he knew Tiger Woods. Rose’s brother commenting on Chris’ “genetic makeup” and suggesting that if he really trained, he could be a “beast,” (a comment referring to a stereotype of a black man’s body to be used solely for labor), to a man blatantly telling Chris and Rose that being fair-skinned had been popular for a while, but now being black is “in.” Even though Chris was nervous about everything that had happened, he tried to keep a calm demeanor because he knew what would happen if he tried to speak out around a large group of white people, that saw him as nothing more than a prop and not as an actual human being. However, no matter how much he tried to avoid them, the microaggressions built up to the breaking point of the entire film.

Chris finds that for years white people have been abducting black people and taking control of their bodies for their “natural attributes” they desired, in a fantastic and incredibly ghastly depiction of cultural appropriation and fetishization of the black body.

How Jordan Peele executed the storytelling, the dialogue, situations, and actions of the people in the movie was absolutely stunning. He interweaves comedy with thriller, psychological horror and social commentary that really captured a part of the black experience that wasn’t exposed until now. Peele created a beautiful tapestry that will be forever locked into the mainstream media, letting people know and understand how we feel.

With a budget of only $4.5 million, the reaction that the public had was only with love because in merely its third week of release, its already crossed the $100 million dollar line. Now more than ever, I hope that it’ll do better because a movie like this is needed. Peele never believed that this movie would get made because of what it talked about. I also couldn’t imagine a studio wanting to see this movie get made, because of its major overarching theme: showing America that black people know that racism is not just abhorrent and a disgusting display of hatred, but also white liberalism, which is a more “acceptable” way of displaying the indoctrinated stereotypes that some people have emulated into their own behaviors, but still disguise. Peele began writing this film in 2012, when people were saying that just because Obama got elected, racism was instantly over. America was somehow, suddenly, a “post-racial” society even though, clearly, it was not. Overall, it was an extremely cathartic experience for me, and as I can imagine, for other black people who watched the film as well.

Coming out of the movie theater, I had the urge to scream into a void for ten minutes because a director finally put the little moments that the black community and I have to deal with on a daily basis. Peele made it so we don’t have to feel crazy for feeling the way we do, and that’s amazing. For that, I can’t thank Peele enough for it, and I can’t wait to see more of his work. I highly recommend anyone interested to go experience this film for themselves.