Meet the future guardians of the cyber world 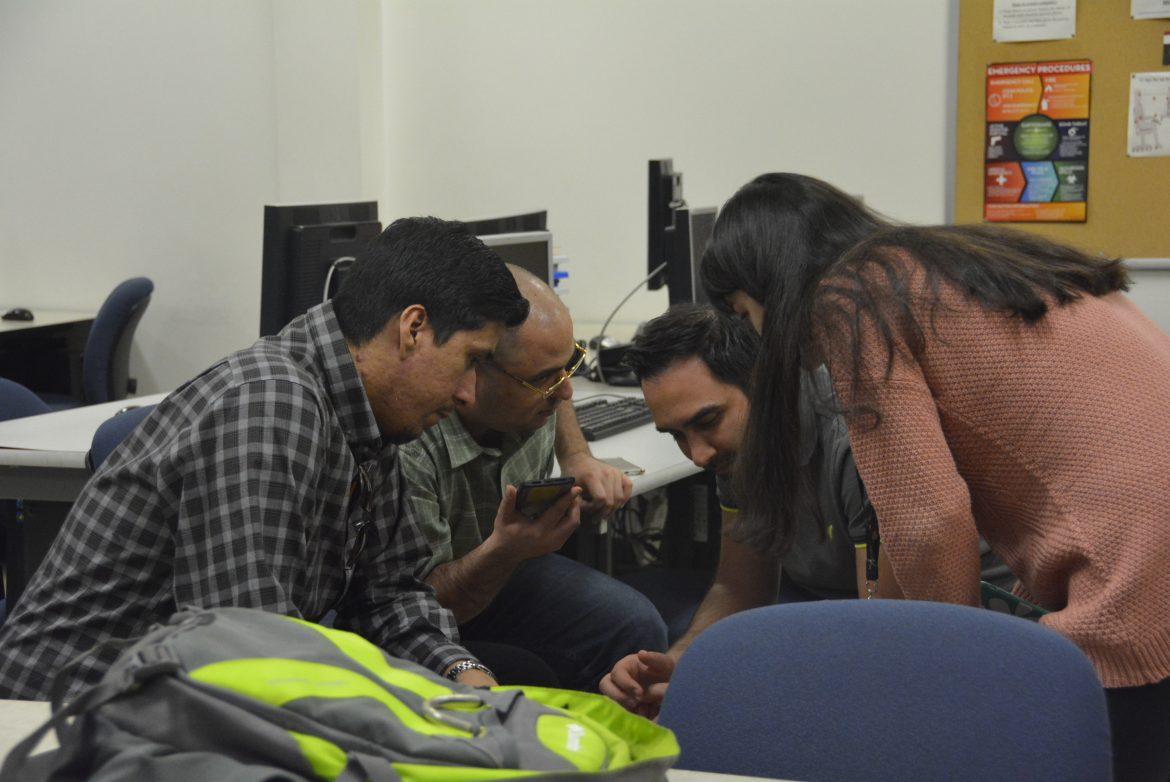 Half of the CCDC team at the club, including Christian Hernandez(far left) and Danielle Yamame (far right) speaking to the president, Rafael, over the phone after the club meeting on Monday night. Photo credit: Nathalie Ramirez

They meet every Monday and dedicate their time every weekend to train for competitions and strive for recognition from their campus. They’re not a sports team: they’re the Layer 8 Computer Security Club.

“It’s in our name: we’re a computer security club,” Christian Hernandez, computer information technology major and vice president of Layer 8, said. “What we like to do is teach and educate our community in how to protect themselves online while increasing their knowledge on what’s going on [in the cyberworld].”

Hernandez assures that anyone can be affected by things that happen online where hacking and data leaks are involved.

“We all have a huge online presence: we shop online, we use WiFi, we are connected at all times through our [mobile devices],” Hernandez said.

Besides weekly lecture on topics, the club offers hands-on experience outside of the classroom. Students are able to practice or play around before applying to jobs once they graduate.

The slogan on their site “Educating today for a more secure tomorrow,” represents their goal as a club to teach the public about how to protect themselves from cyber attacks or data theft and spread that knowledge.

According to Hernandez, although a majority of the club is predominantly computer science or CIT majors, they’ve received people from all types of majors anywhere from theatre to business, who want to learn about computer security.

“[Club members] are passionate about learning, they want to learn more despite being unsure at what they like. When the founders created the club, they wanted a place to learn more on their own outside of the class,” Hernandez said.

Other than offering knowledge and hands-on experience, the club prepares students for the real world due to the partnerships and connections they gain. The club offers opportunities for students to add to their resume, according to Hernandez.

“You’ll learn more here than in most classes. I will try to be on the team next year,” Carter said.

The club began with the objective to compete and win the Western Regional Collegiate Cyber Defense Competition, and now after competing for six years, the club flourished into an organization through sponsorship donations and eventually made it into a real sport.

However, this is the first year they won against their biggest rivals U.C. Berkeley, Stanford and Cal Poly Pomona.

In a chaotic room, the competition challenges teams of eight students in cyber defense, as well as general Information Technology, while dealing with angry customers and demanding bosses.

The objective of the competition is to secure and protect computer systems from “real legitimate high-end hackers, the people you hear about in the news,” according to Hernandez.

Team members also develop various skills during the competition, and Danielle Yamane a computer science major and only woman on the team, did not let the male-dominated competition intimidate her.

“I’m on the business side, which is ironic because I never learned business, but I did well in communicating and working in the team,” Yamane said.

They took the competition by storm this year and are now recognized by sponsors of the event such as the FBI, NSA, Homeland Security, Google, Palo Alto Networks, Cisco and Wal-Mart.

“CSUN has never been in the eyes of the competition,” said Hernandez, as they’ve always been seen as participants and not competitors.

Club advisor Doris Chaney has helped gather funds, according to Hernandez. Layer 8 has only received funding from sponsors and private company donations.

The club is gearing up to represent CSUN for Nationals in San Antonio Texas in the upcoming week.

The reason they want to win is that through recognition, CSUN will help in funds for the club,

“Other teams have their classrooms, we don’t. We have a small corner in a lab,” Hernandez said.