Students and faculty advise students about research studies and programs 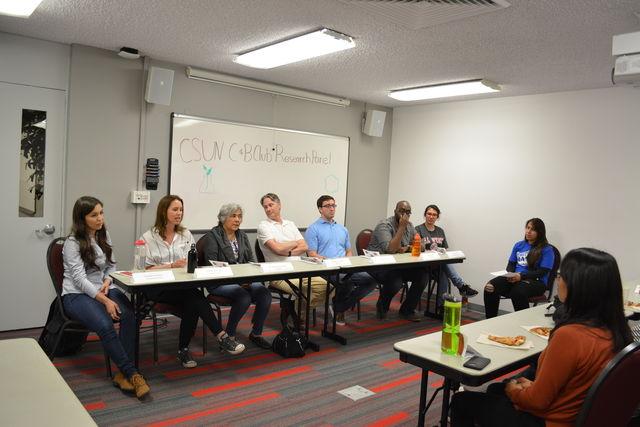 The Chemistry and Biochemistry Club invited students who have an interest in research studies to a research panel on Thursday night at the University Student Union’s Granada Room.

Panelists were able to give advice to students who are currently seeking to join a research study program. Dr. Simon Garrett advised students to join a national program such as The Research Experiences for Undergraduates by the National Science Foundation rather than working at a professor’s lab.

Student panelist and biochemistry major Michele Ramos advises students to do their homework before going to an interview when seeking a job in research.

“When you are being interviewed, always tell them what you think their research is about so they know that you are on the same page as them,” Ramos said.

According to Ramos, this shows that people are genuinely interested in that specific area of study.

Student panelists also gave their points of view on what it is like working at a research lab, which they agreed is stressful.

“When my experiments did not work I felt like I was never going to graduate,” Reidenbach said.

As an undergraduate, Ramos finds herself not knowing a lot of concepts only because she has not taken all of the required coursework.

Zavala also shared that in research, there will be times when people will take two steps forward and fall five steps back.

“You get redos in science,” Zavala said.

At the end of the panel, a student asked if it is ever too late to join a research study program. Garrett admitted he would prefer if students came as soon as freshman year, but does give the opportunity to seniors who sometimes leave it for their last semester.

Garrett has witnessed students who have low GPA’s join a research program and after, their grades improve.

“GPA is not always good predictor on how they’ll be in a lab,” Garrett said.

Biochemistry major Brenda Velasco, showed interest in research when she was younger and joined Maximizing Access to Research Careers as soon as she transferred to CSUN. Through MARC, she has been able to get into lab professional developments, apply to a Ph.D. program and present during conferences.

Velasco is studying Legionella, a bacteria that causes pneumonia in people with weak immune systems, such as pregnant women. In August, Velasco will be attending Stanford for the Ph.D. program.

“MARC has helped me smooth the transition between undergrad and Ph.D. school,” Velasco said.