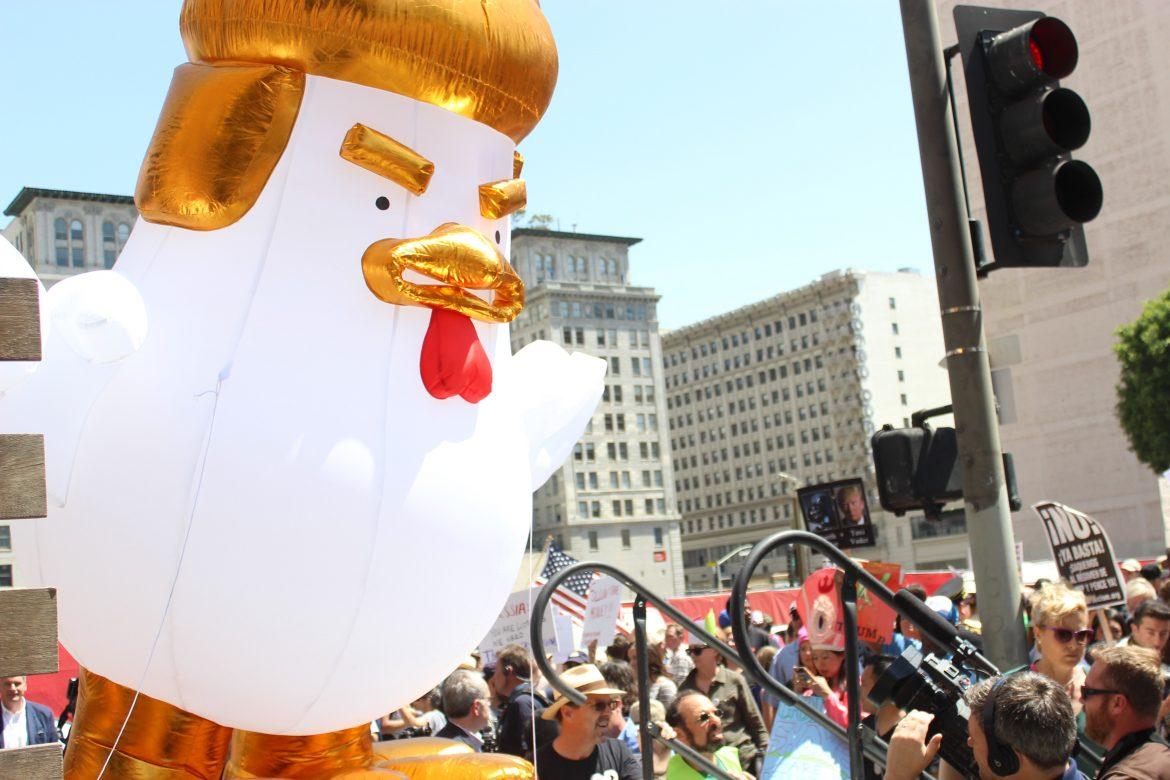 The chant “Show your taxes!” repeated through the crowded streets of Downtown Los Angeles Saturday afternoon during nationwide marches calling for President Donald Trump to release his taxes.

Thousands of marchers crowded together demanding that the president release his tax returns for a more transparent look into his former business dealings.

“There are indications upon indications about connecting [Trump] with Russia,” said Max Kleinman, who was performing as a Russian oligarch for the activist group “Useful Idiots.”

The march started near Pershing Square when a truck carrying a large inflatable chicken, resembling the president, drove away from the intersection.

Dozens of cities including New York City and Washington D.C. participated in the widespread marches, as reported by CBS.

Different protests have emerged since Trump has taken office—ranging from women’s issues to immigration.

“I think that it’s not about individual protests, but accumulation of them,” said 26-year-old Jami Schakel. “…If enough people are letting their congressmen and women know that we’re unhappy, whether it’s through protest or by directly contacting them, there’s no way it can’t help.”

Democratic congressmen, like Ted Lieu, D-Torrance, and Brad Sherman, D-Sherman Oaks, spoke on a makeshift stage by the route’s end outside City Hall to voice concerns about Trump and to gain some votes for their party.

“This [march] is part of an overall effort to slow some of Donald Trump’s worst initiatives down, call him to account, and to elect democrats,” Sherman said.

Trump previously told the Associated Press he would release his tax returns once the IRS finished its audit against him.

Presidents have been releasing their tax returns since Richard Nixon’s administration, making Trump the first president in 40 years to refuse his tax returns in office, according to CNN.

However, Americans did get a brief glimpse into Trump’s tax history in March when it was reported that MSNBC host Rachel Maddow aired a portion of Trump’s 2005 taxes she obtained from investigative reporter David Cay Johnston.

Trump’s 1040 form showed that he paid $38 million in federal income taxes after reporting $150 million in income, according to NBC news. The White House confirmed the numbers before they were aired.

Some protesters felt it would be unlikely for the day’s march to gain them any more access to the president’s tax history.