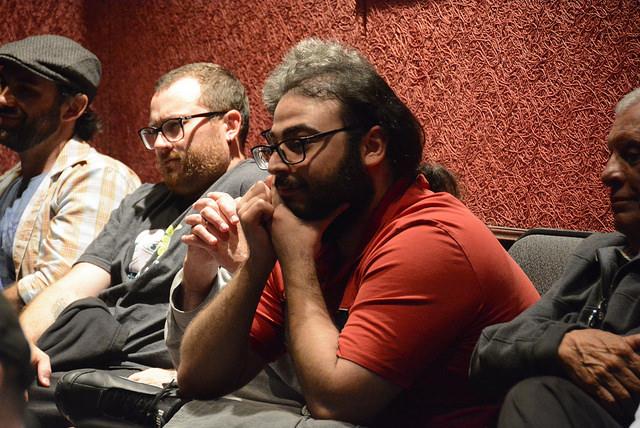 Screenwriting Major and MFA student Rayan Mahfouz said, "I appreciate that the film didn't hide the truth. It's the east. There really are no good guys there."

The political science and cinema and television arts department chairs hosted the screening of “Tickling Giants.”

Youssef is an Egyptian native who hosted “Al Bernameg” or in English, “The Show.” The show was filmed in Cairo, which began toward the end of the presidency of Hosni Mubarak.

“He is known as the Egyptian Jon Stewart,” said Jon Stahl, chair of the cinema and television arts department. “The producers for the film are the same producers of ‘The Daily Show.'”

The documentary explores the political tension with Egypt’s presidents and freedom of expression. Journalists are imprisoned for expressing opinions and citizens who post their feelings on Twitter receive backlash. Through the presidencies of Mubarak, Mohamed Morsi and Abdel Fattah el-Sisi, the show broadcasted throughout Egypt to shed light on the oppression that is present in the country.

Youssef was a heart surgeon and left his career to begin his show on YouTube, which was shot in his laundry room. His sole purpose for the show was to take revenge against the media, meaning the news programs that would air the protests in Cairo. He felt as if the media put the protesters in a false light during the Egyptian Revolution.

Moreover, Youssef had offers from TV stations and his show took off. With a studio and a live audience, Youssef became a celebrity. Egyptian citizens in the documentary expressed that people understand Democracy better than ever, because of Youssef.

With 2 million viewers a night, Youssef made fun of military authority and made jokes about presidents. After Mubarak stepped down, Morsi became the first elected president of Egypt. However, he was unpopular among citizens as well.

After Morsi, there came el-Sisi, who was a military leader, everything the Egyptian Revolution stood against. Nevertheless, he was extremely popular among citizens. With this in mind, Youssef’s show was shut down for insulting authority.

Youssef now lives in Oakland, Calif., with his family. They fled Egypt after Youssef lost a lawsuit against his former TV network, CBC.

“I thought he was inspirational,” said CSUN student Luis Cueto. “I love that he was compared to Jon Stewart.”

Cueto grew up without watching cable. However, once he attended community college, he watched Stewart for the first time. He said that he is grateful to have gotten the chance to watch Youssef.

Nathaniel DeBevoise, a political science major, said it is unfortunate that Youssef had to stop broadcasting his show. According to DeBevoise, the public will be missing out on Youssef’s resilience.

“It’s tragic that such a wonderful person and a great comedian would be snuffed out by the government,” DeBevoise said.

The audience broke out in applause at the end of the screening and talked among themselves on the impact of the film, before having a group discussion with faculty.