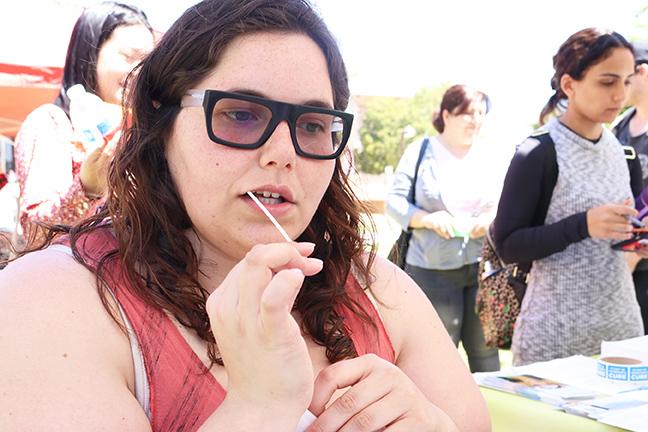 Chandra O'Connor, a 22-year-old anthropology major, gives a saliva sample to determine if she is a potential donor for a bone marrow transplant at Oviatt Park during the Be the Heroes bone marrow drive on Wednesday. Photo credit: Nikolas Samuels

Students from two different health administration classes teamed up this semester to hold the Heroes Wanted Bone Marrow Registry Drive this week. The drive aimed to find potential matches for transplants among the CSUN community.

About 400 students came through Oviatt Park over Tuesday and Wednesday to swab their saliva to find out if they could potentially save a life.

Student Chandra O’Connor found herself near Oviatt Park on Wednesday and took advantage of the opportunity to find out if she is a match.

“It was just kind of a why not situation,” O’Connor said. “And they said it wasn’t as painful as it used to be.”

The original inspiration to hold this event came from Eleanor Jones, the director of budget operation and academic planning. She suffered from a blood disease and needed a bone marrow transplant which gave the classes the idea to find potential matches for transplants among the CSUN community.

“We’re not doing it just for her, but she is why we had it in mind,” said Lanell Williams, the CEO of Mata-Match.

Mata-Match is a play on words of Be the Match, which was the sponsor of the event.

“We decided since most of us are matadors instead of Be the Match, we would say Mata-Match,” Williams said.

Assistant professor Carrie Pullen of the Health Department said she was proud to see her students pull together to hold an event that has the potential to save lives.

“I thought they did a great job,” Pullen said.

The event was also made possible by an $800 grant from the Health Department.