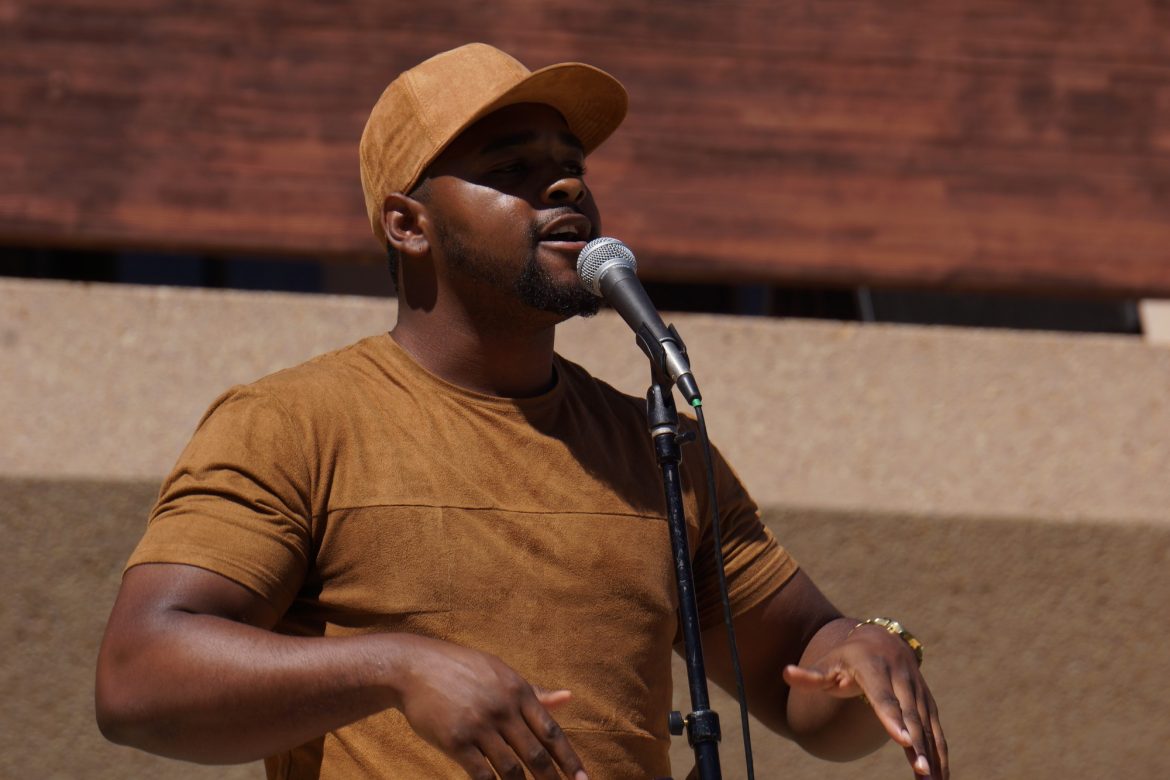 World Play, Caleb Word, 24, performing outside the Oviatt Library on April 20, 2017 for Poetry Palooza. The dream for Word, is to be on that "Kendrick Lamar level." Photo credit: Tyler Irvin

The Creative Writing Circle put together Poetry Palooza, where Vocal Artillery was first to take the stage at the Oviatt Lawn on Thursday afternoon.

The event started in front of the library and migrated to Jerome Richfield Hall where students could win prizes and raffles. Featured poets throughout the day were Claudia Rodriguez, Mary Angelino and more. Students also had the chance to read their own poetry during the open mic sessions.

“I think poetry creates these other worlds for people to come into and relate to,” said Sophia Apodaca, vice president for the organization. “Whether you’re here or across the country, and you’re reading a poem, it means something different to everyone.”

Apodaca was a mathematics major at CSUN before she switched to creative writing. Now, she is a graduate student in the credential program. She made the choice to change her major after she realized poetry was a great outlet to express herself in a way that math could not.

When it comes to the group Vocal Artillery, Apodaca said she saw them at a Lit Crawl, which is an event for people to showcase their creative writing.

Jamar Morris, founder of Vocal Artillery, said the group values artistic expression and how it can be used as tool of communication. He believes society has benefited from poetry in various ways, from children’s books like Dr. Seuss, to rap songs on the radio.

“We were never actually a student organization. We were just five students at the time, and we got together, and we just wanted to have space for us to do what we do,” Morris said.

Vocal Artillery began about four years ago, when those five students would meet in Santa Susana Hall and have a space to speak their minds freely.

Vocal Artillery member Caleb Word, whose stage name is Word Play, said after a few years, the group really took off with having a huge following. The group was a way for him to let him speak the truth without ridicule.

“Poetry allows us to just sit back, relax, and forget about the norms. You’re able to be abnormal, in my opinion,” Word said.

Word’s girlfriend, Shannon, a marketing major at CSUN was in the crowd on the Oviatt Lawn to cheer him on as he stepped on the stage.

Students can reach the Creative Writing Circle at ncwcgroup@gmail.com about upcoming events. To reach Vocal Artillery, they perform every second Thursday at Collective Lifestyle.