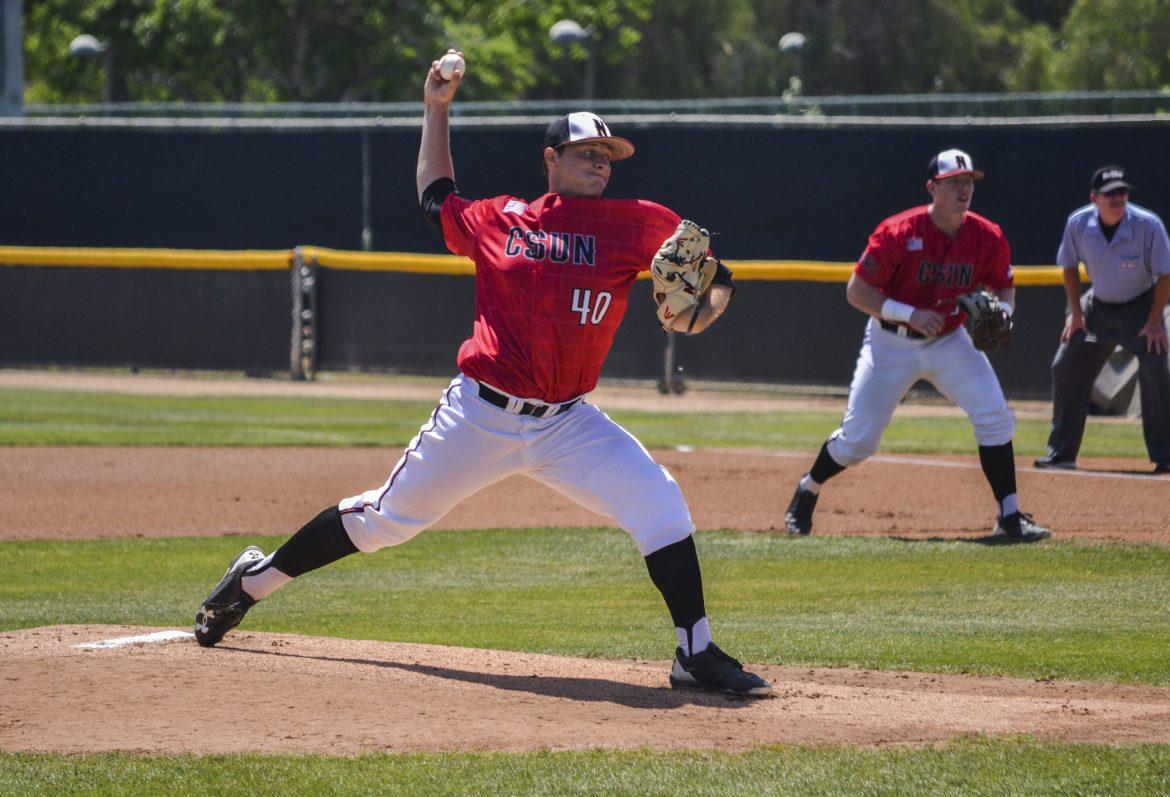 Samuel Myers pitched a complete game in the series finale against UC Riverside. The Senior had a career high in strikeouts (11) and improved his record to 3-5 on the season. Photo credit: Tomas Rodriguez/ The Sundial

CSUN baseball’s Samuel Meyers went prepared to Sunday’s series finale against U.C. Riverside (UCR). The senior had come off a six-inning performance at No.17 ranked Long Beach State, allowing just two earned runs. He carried his performance back home and had a career game against the Highlanders. 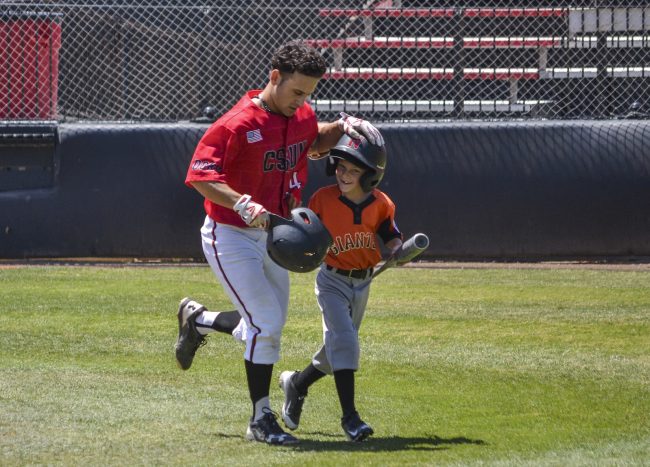 Myers allowed three runs on five hits and pitched his first ever complete game for the Matadors, beating UCR 10-3 for the series sweep. He also struck out 11 batters, a career best.

“The story of the day is Sam steadying the ship a little bit,” coach Greg Moore said. “He did a really nice job of finding a pitch he can throw for a strike, it was the slider. To Sam’s credit he not only got it going, he fought to stay in the game late and finish it.”

Myers got into trouble in the first inning by allowing a run on a sacrifice fly after UCR got a runner in third base with less than two outs.

“The swing early by Alvaro was big,” Moore said. “[UCR] scored a run on us and then Alvaro comes up and goes first pitch and gets it, that’s fun stuff. That’s punch for punch and that’s where the game started.”

West gave up a walk, but he retired the next two batters before he ran into trouble again. After a pair of walks, the bases were loaded.

Dylan Alexander capitalized and singled to left field to bring in two runs. Another run came in when UCR reliever Richard Delgado came in for West. Delgado walked Nick Sablock and gave up a wild pitch to the next batter, bringing in another run.

Rubalcaba came up to the plate again and got another RBI with an infield single. The bases remained loaded and Delgado walked Fred Smith allowing another run.

The Matadors sent 13 batters to the plate and had a comfortable lead after the first inning, 6-1.

Myers had a 1-2-3 second inning but allowed three straight hits in the third. The Highlanders got two runs back and tried to keep in pace with the Matadors.

“I was just looking for a chance for the team to win,” Myers said. “I didn’t expect to be going so deep in the game, but I just kept rolling. I had a couple quick innings and made the most out of it.”

He dominated UCR hitters and did not allow a hit after the third inning. Myers retired 19 of the last 21 batters to earn his third win of the season.

The Matadors offense continued their dominance in the three-game series against their Big West foe.

Albee Weiss homered twice in the game to bring his season total to nine. 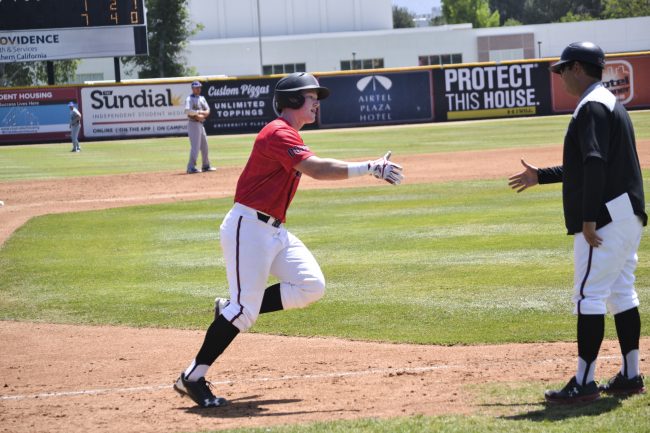 “It’s a great stat to have,” Weiss said. “But trying to hit line drives up the middle and let them carry themselves out of here is really the goal,”

Weiss said that Rubalcaba energized the team and it helped up him get set up for a good game.

“The first at-bat, being a lead-off hitter is a lot more than seeing pitches,” Weiss said on Rubalcaba. “If you can get a guy in there to swing the bat like he has and give your offense a chance to spark at the beginning like that, it sends a message to their pitching staff and it really starts a spark for the offense.”

Alexander, Weiss and Rubalcaba all finished the game with three hits and two run batted in each. Myers had all the offense he needed to go the distance.

“They have had my back all year, I haven’t been the easiest,” Myers said. “I have a thing where the first couple of innings I give up a couple of runs and they always pick me up. It gives me more confidence.”

Myers complete game comes a day after Andrew Weston tossed a shutout against UCR. It was the first time Matadors pitchers threw back to back complete games since 2015.

With the sweep, CSUN is 7-5 in conference play and only one game shy of reaching .500 overall. However, UCR’s season woes continue, as they currently sit in last place of their conference standings.

“It’s fun to sweep a series but we know that’s a hill off in the distance,” Moore said. “It’s a good challenge to play consistent enough to win three games. Now we got to move on and we got more work to do.”

The Matadors host Loyola Marymount on Tuesday at 3 p.m.