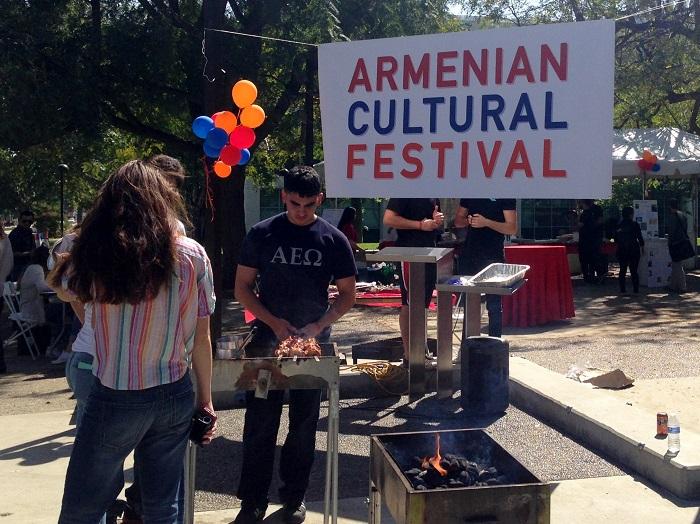 Edward Shamirian, a member of the Armenian Student Association, cooks a classic Armenian bbq at the annual Armenian Cultural Festival with the help of other members on March 19. Photo credit: Saffana Hijaz

The Los Angeles County Board of Supervisors appointed April as Armenian History Month. The motion was brought forth by supervisors Janice Hahn and Kathryn Barger.

Biayna Ayvazian, president of the Armenian Students Association (ASA), said Armenian History Month will be extremely beneficial to other ethnic and cultural communities besides the Armenian community.

“It’s important to be educated and culturally sensitive,” Ayvazian said. “I think it’s going to be super important for other people to be aware of our culture.”

According to Ayvazian, the ASA will be having an Armenian Genocide Awareness week starting April 24.

“We passed a resolution in the AS senate to come around and educate the senate about the genocide,” Ayvazian said.

After their presentation, ASA will be placing 102 crosses on the lawn behind the Oviatt Library in front of the Arbor Grill. The crosses represent the amount of years since the genocide occurred, according to Ayvazian.

Ayvazian said that they will be placing roses in front of the matador statue to honor the victims of the genocide.

Raffi Kassabian, a member of the Board of Directors for the Armenian National Committee of America-Western Region (ANCA-WR), said having recognition of the Armenian genocide will help the cycle of future genocides.

“The Armenian genocide is important for everybody because history repeats itself,” Kassabian said. “If we don’t properly acknowledge and demand justice for genocides that have happened earlier, it is bound to happen again.”

Kassabian said the Republic of Turkey has not taken responsibility for the genocide and continue to deny it.

The ANCA started a movement called “America We Thank You,” which is a program to educate public officials, journalists and the public, about the work Americans did to help Armenians and Armenian orphans during the genocide, according to Kassabian. Americans in today’s dollars raised about a billion dollars to donate to the cause, Kassabian said.

ANCA is also actively promoting the movie “The Promise” which is the first major Hollywood film about the Armenian genocide, which released on April 21.

In honor of the Armenian Genocide, ANCA will be participating in the March for Justice on April 24, starting at Pan Pacific Park to the Turkish Consulate in Los Angeles at 12 p.m., according to Kassabian.

“It’s not only about recognition, it’s about seeking justice,” Kassabian said. “Our job is to educate and motivate the community. It’s not just something specific to April 24, it’s non-stop, 365 days a year.”

On April 27, ASA will be having a genocide vigil. The vigil will include guest and student speakers, Ayvazian said.