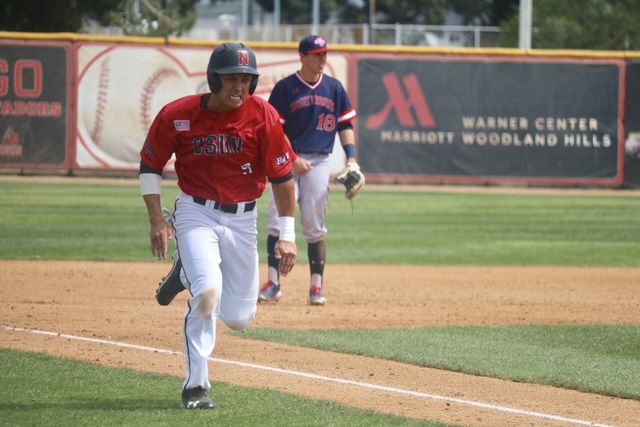 CSUN’s junior outfielder, Riley Conlan, runs for home, bringing in the first run for the Matadors on Sunday, March 19, at the Matador Field.

But unlike his two teammates, O’Neil decided to stay at CSUN for his senior year rather than accepting his draft pick by the Detroit Tigers.

Every year around the second weekend of June, high school and college baseball players anxiously wait for three days to see if they are one of over 1,000 names that are selected. Being drafted would not only fulfill their childhood dreams, but would reward these athletes for the blood, sweat and tears it took to get to that point.

There is a difference between being drafted from high school and college.

As a high school player, one can get drafted straight from high school and go into the organization. But as a college player at a four-year school, one can only be drafted during your junior or senior year.

With the draft in the back of the mind of some qualified Matadors last year, O’Neil felt this may have affected some players’ performance.

“It[draft] was always kind of in the back of their mind,” O’Neil said. “That may or may not have affected how they played but mentally it could be tiring.”

This years Matador baseball team has six seniors looking to impress the scouts one last time. CSUN baseball coach Greg Moore tells his players in order to get to that level, they have to be obsessed and addicted to becoming the best.

If players are selected in their junior year of college or straight out of high school, they have the option to go either go professionally to the organization or continue their academic journey before their baseball career.

Ultimately, it is up to the player to weigh the pros and cons of accepting their draft pick or continue at a collegiate level.

For O’Neil, he felt that there were a lot more pros to staying. A main reason was that he wanted to obtain his degree in liberal studies before he transitioned to the professional level.

Coming back for the purposes of getting a degree helps O’Neil with keeping his priorities straight and not let the outside noise affect him too much.

Fred Smith, the Matador senior starting shortstop, talked about the outside noise being just only outside noise.

“We want to focus on one thing at a time and for us as a team is winning,” Smith said. “Obviously we want to see ourselves pursuing our pro career, but that is something that will happen in due time.”

Smith said the team recognizes the noise will always be there, but they do not talk about it much among each other. Most of the players have been getting looked at by scouts throughout their time as student-athletes, from high school to the present.

“It’s kind of the same type of deal,” Smith said. “You really don’t want to let that change the way you play the game.”

For the players in the Matador baseball team, there is a consensus of focusing on one game at a time and playing team ball. Moore said it makes them players when it is about the team and thinking about the draft divides that attention by putting more pressure on themselves.

However, O’Neil does not feel the pressure of this being his last year playing in CSUN.

“It’s not more pressure it’s probably more fun,” O’Neil said, “I remind myself to enjoy this because this could be the end and I want to remember it.”