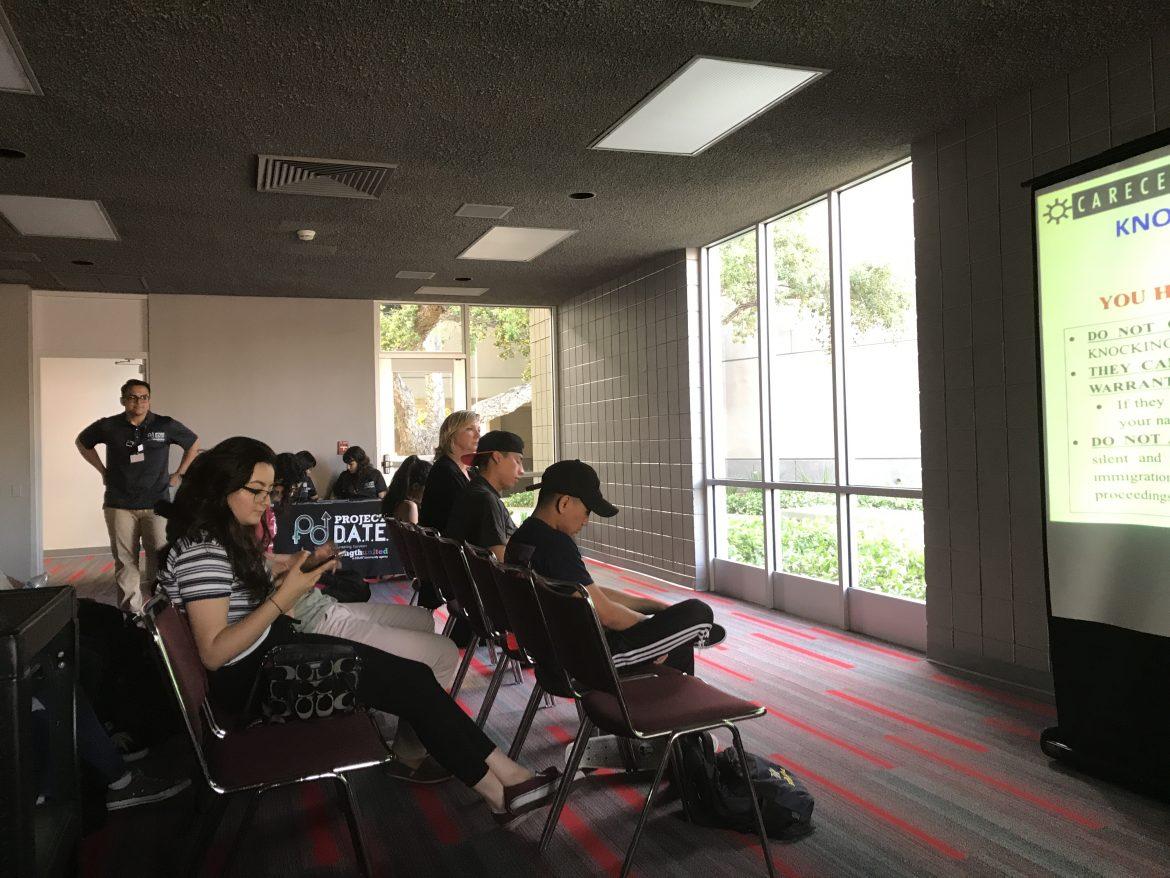 A group of students listen in on Sheela's presentation on know your rights.

Project D.A.T.E. with collaboration with the Dream Center held a presentation on immigration relief for survivors of domestic violence and sexual assault and what can be done to help these victims without the fear of getting deported.

Sheila Marie Sued, Co-Supervising Attorney of the San Fernando Valley Office at the Central American Resource Center, talked briefly about five general types of relief a survivor of domestic violence, or sexual assault can apply for if undocumented.

Five types of relief are U Visas, VAWA (Violence Against Women Act), T Visa, Asylum and I-751 Removal of Conditions on Residency.

Sheila discussed the five options and the process to apply in order to qualify along with the risk for each of these methods. She broke it down by describing each one and exactly what each one can do for these victims.

U Visas applications can take up to two and half years for it to be reviewed, and acceptance for the U Visas has been limited to 10,000 annually.

VAWA is a self-petition for lawful immigration status and there are six to seven requirements to apply. This method will only take 11 months for a decision to be made.

T Visas are for victims of severe forms of trafficking who suffered extreme hardship and severe harm. Only 5,000 granted annually but it has never reached that cap.

Asylum is for any person fleeing their home country, and seeking protection due to persecution for race, religion, nationality, membership in a particular social group or political opinion. Denial of asylum can result in deportation.

I-751 Removal of Conditions on Residency is a petition for the removal of their permanent resident status obtained through marriage.

Erin Akeno, Asian American Studies and Gender Women Studies Double Major, and a part of Project D.A.T.E. held this presentation in part of their S.A.A.F.E. week.

“This year our S.A.A.F.E week is focused on activism and awareness,” she said. “We really wanted something to do with sexual assault and rape awareness with also what’s happening in social political climate at this point.”

Joletta Despar, freshman, had it really hit home for her and opened her eyes to this situation.

“I never actually witnessed or felt any of this and honestly it’s a really big eye opener,” Despar said. “My family is undocumented, I am not, so even though I have partially an eye into that world, I’m not completely in it but I’m trying to put myself in their shoes.”

Akeno feels that as a community we can come together to help these victims in a time of need.

“We understand that the undocumented community is very targeted right now and we think that it should be really good for us to become more of a community here at CSUN to know that they are safe with us as well,” Akeno said.