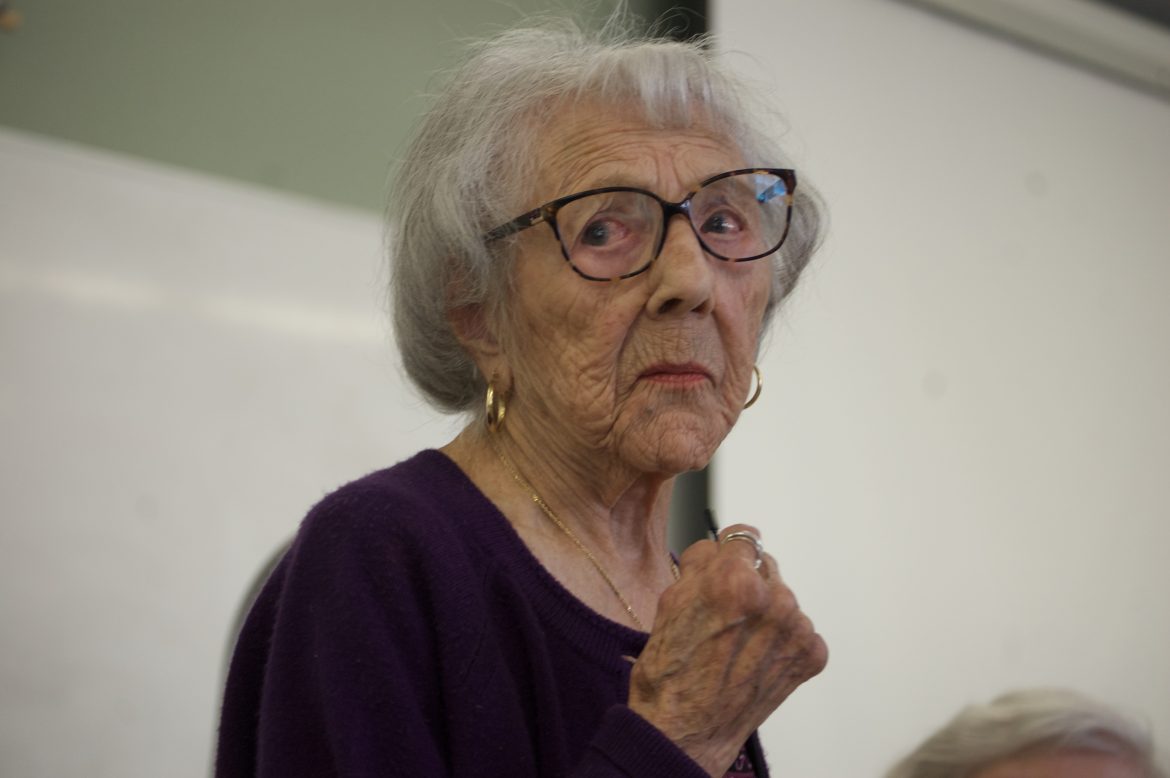 Connie Farrell Weinberg, a 105-year-old woman, gave a speech to students in Professor Helen Dosik’s sociology of aging class about her hip surgery and her life.

Weinberg is the oldest patient to have had hip surgery, at the age of 103, at Cedars-Sinai Medical Center.

“I went to see my doctor and told him about the surgery. ‘No way,’ he kept saying to me, ‘You’re 103 already,’ and I said well someone’s going to have to help me,” said Weinberg. “They were all afraid I was going to die. If I weren’t afraid of dying then why should they be?”

After her doctor in Apple Valley was unsure about the procedure, she was referred to Cedars-Sinai Medical Center.

“I went over there at 5:30 in the morning. I got a new hip and in the afternoon they [picked] me up. The next day he made me walk, and they signed me up from rehabilitation, I was there for 21 days,” said Weinberg.

Weinberg was born in Venice, California on December 8, 1911. She started working at the age of 15. Her first job was in the printing business. However, she was let go because her boss knew she had just gotten married.

“That’s what they used to do. If they found out you were married, out you go,” said Weinberg.

In 1929, Weinberg got married but eventually got a divorce and remarried. She had two children, one of whom has died. Her living daughter, Sandy Farrell, accompanied her to CSUN to support her.

Before World War II, Weinberg was a chorus dancer. During WWII she worked at an airplane factory, along with many other women.

“We were making airplane parts so then I became an inspector and the United States Navy hired me,” said Weinberg.

Along with her professional accomplishments, Weinberg discussed her personal life and achievements.

Until she developed arthritis, Weinberg was an avid piano player. She has also been making jewelry for 37 years. She stopped driving at the age of 94 for fear of getting in an accident.

She shared with students how she stays healthy by eating a full breakfast every morning, including oats, toast, coffee and fruits. She told students to keep going in life and to dress themselves up once in a while.

“That’s what I tell anyone that tells me ‘What’s your secret Connie?’ It isn’t that I dress up beautiful, but I keep myself looking halfway decent,” said Weinberg.

Weinberg ended her speech with a thank you to the class for having her as a guest speaker.

“This is so precious to me, I will never forget this,” said Weinberg. “I’m so glad I met all of you and [you’ll] remember me.”