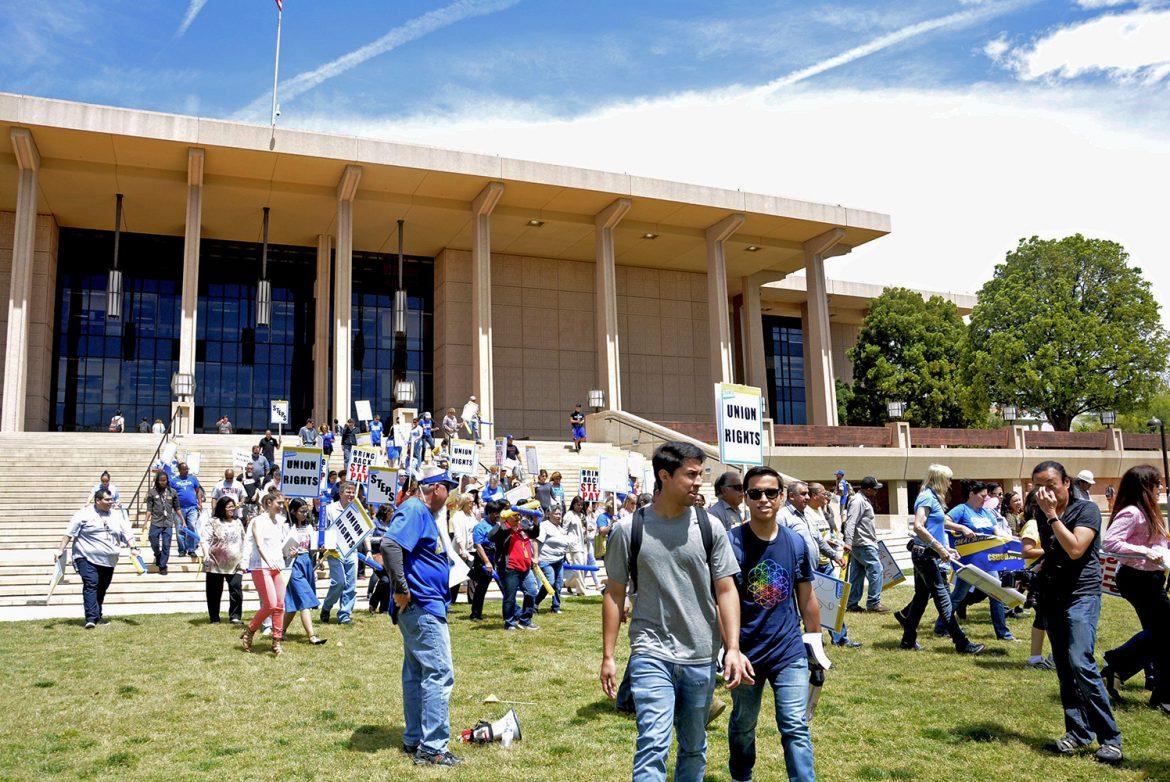 Over 200 members of the California State University Employees Union (CSUEU) rallied together around the Oviatt Lawn on Wednesday to raise awareness of the contract bargaining currently being held.

The first bargaining sessions between the demands of the CSUEU and the Chancellor’s Office began in February. The demands, briefly proposed in the CSUEU preamble petition include higher wages, safer work environments, transparency and the protection of confidentiality and freedom of expression.

After the rejection of the demands, activists in CSUEU then toured CSU East Bay, San Jose and Los Angeles. According to Neil Jacklin, vice president for organizing within the CSUEU, the rally tour will continue again at CSULA in two weeks, move onto CSU Long Beach and the Chancellor’s Office, then return to CSUN from June 20 to the 22.

“The problem is that the governor underfunded the CSU system,” Jacklin said. “We’re short by about $167 million dollars, which will force schools to turn students away.”

Within the current contract, the CSUEU focuses on employee benefits such as paid vacation and leave. However, the next issue that the CSUEU will attempt to tackle through contract bargaining relates directly to benefits and wages, articles 20 and 21 within the contract.

“It’s been slow so far but they haven’t given us any of the economic and salary benefits because they’re waiting for the main revise,” CSUEU Patt Gantt said in regards to the progress being made. “So we’re trying to deal with the non-economic issues around working conditions and processes, then hopefully once the money shows up we’ll be able to figure out the balance to get a contract.”

Addressing the demonstrators, Gantt said this is about what it takes to change the contract.

“Make it so that you have meaningful wages, protect your benefits and have working conditions that you can thrive in,” Gantt said.

The CSUEU is composed of 15,000 members statewide who are staff, faculty and students of the CSU system. The workers in the union being represented by bargaining units are from sectors of healthcare, operations, administrative and technical support.

“It’s important because we need to be well compensated and have good working conditions so that we can provide the students with positive educational experiences while on campus and help them make progress to their degree,” Gantt said.

On May 23, the CSUEU plans to approach the CSU Board of Trustees in Long Beach with their propositions. Typically, the CSUEU tables before their rallies, collecting signatures for the preamble petition which states the union’s principles and “demand[s] that the CSU hear us, respect us, and value us.” This contract bargaining is planned to end on June 30.

“First of all we want to build awareness and educate the membership on the issues and get their feedback and support and help them mobilize to express their concerns of their working conditions, so that we can show management that we’re serious at the table,” Gantt said.