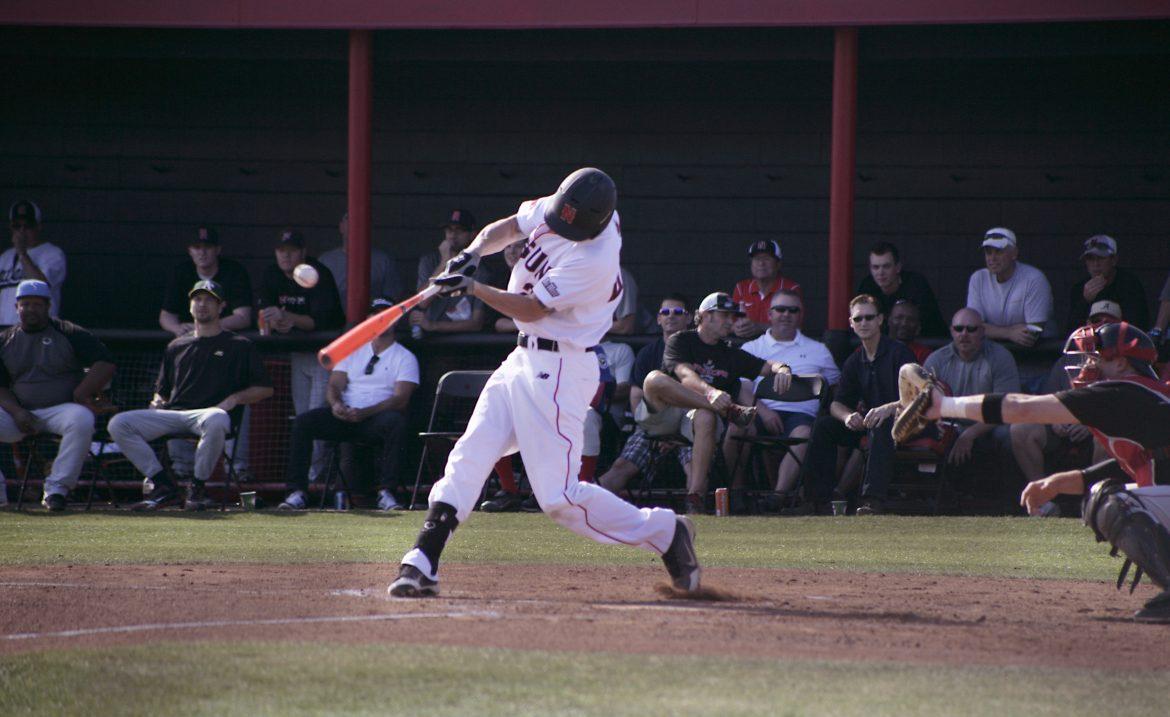 Spencer O'Neil drives the baseball as the CSUN alumni observe from the opposing dugout in the 13-1 win at the Matador Field in Northridge, Calif., on Sunday January 25, 2015. Photo credit: Raul Martinez

CSUN was not able to match Hawaii’s offense, losing 9-4 due to a number of base running blunders.

The Matadors kept it close till the eighth inning, not being able to get anything going against the Hawaii bullpen who went three-plus innings only allowing three hits and striking out four batters.

Starting pitcher Andrew Weston struggled to get anybody out allowing four runs and six hits in his first two innings, putting the Matadors in an early 4-0 hole.

“[Weston] didn’t execute and locate early,” said Coach Greg Moore. “It wasn’t his best but he battled and he got us seven innings.”

After a quick first inning, Weston suddenly lost sight of the strike zone and walked three batters to put his back against the wall.

The Matador batters took advantage and scored three runs, one of them being a two-run double by shortstop Fred Smith, cutting the deficit to one run.

Weston continued to struggle going into the fourth inning, allowing his second home run of the day to Hawaii first baseman Eric Ramirez. The next batter almost made it three, but right fielder Nick Sablock made a sensational play at the wall to rob Hawaii of the home run.

The Matadors cut the deficit back to one in the fourth inning thanks to Smith with an RBI single, his third RBI of the game.

“I think our opportunity was there in that fourth inning to really extend the pitch count but we didn’t do that” Moore said.

Hawaii expanded their lead after a run in the fifth and seventh inning making it 7-4.

Still the Matadors had chances to score a couple more runs but were caught in the base path, with two runners getting out on home plate and two more runners getting picked off in first base, all outs ending strong threats in the inning.

“When your playing a weekend game you are going to want to be aggressive in a couple of areas,” said Moore regarding the teams base running approach. “There are other examples where we did a good job when we moved up runners moving up runners from second to third.”

In the eighth inning Hawaii scored a couple of insurance runs and finally knocked Weston out of the game after nine runs,14 hits and 114 pitches thrown.

Pitcher Joey Deceglie came in and finished off the eighth, stranding a runner on second.

The Matadors play the rubber game of the series against Hawaii Sunday, April 30 at 1 p.m.