Timeline: The era of Harrison 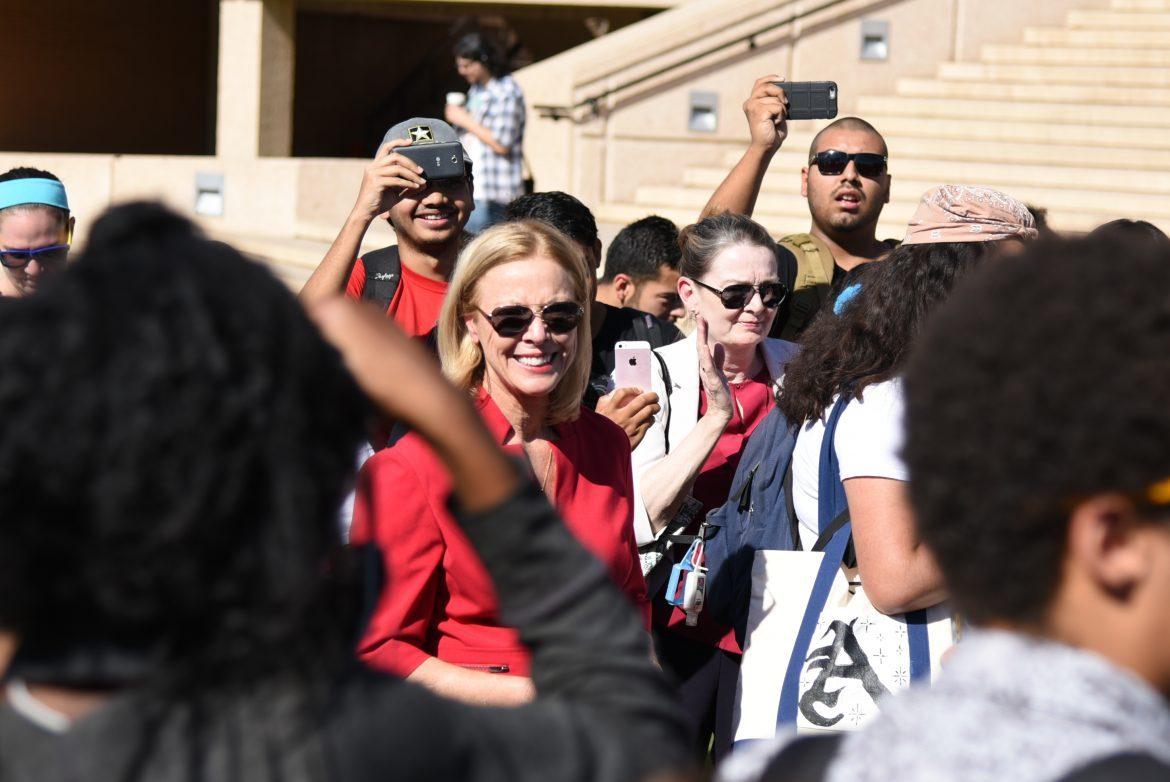 CSUN President Dianne Harrison attends the protest in front of the Oviatt Library after the presidential election on Nov. 9, 2016. Photo credit: Nicole Wong

June 2012: Dianne F. Harrison is named the fifth CSUN president. Before her position at CSUN, she was president at Cal State Monterey Bay since 2006, according to a Los Angeles Times article which announced her appointment.

Aug. 2, 2012: Gov. Jerry Brown awarded Harrison, along with two other CSU presidents, with raises that were met with criticism from many people, some of which were students. Kim Geron, of the California Faculty Association, called the raise appalling because, although the presidents were getting more money, the wages for the faculty had remained the same for five years at the time. Many trustees argued that the money did not come from taxpayers, but from private sources.

Dec. 2, 2013: Harrison announces that CSUN will partner with Southwestern to allow students a head start in their pursuit of a law degree. The 3+3 Bachelor of Arts (B.A.) and Juris Doctor (J.D.) degree program shortens the time it would take to earn the degree from seven to six years, by counting the fourth year of an undergrad student, as their first year of law school.

Feb. 20, 2015: President Harrison and her husband John Wujack joined CSUN’s Heritage Society, which is a group that consists of people who have made financial commitments to CSUN in order to make to the campus better through estate plans. By doing this, Harrison joined 140 others who have made planned gifts to the campus.

May 6, 2015: Harrison, along with five other women, received the Trailblazer Award to exemplify her work in academia and recognize her achievements throughout her time. This was also the first time in history that six women were given the award for leadership and service in higher education.

Nov. 9, 2016: The day after Donald Trump was elected, over 100 CSUN students marched on campus in protest. The protesters made it clear that they would continue to fight for diversity on campus. Harrison attended the protest and supported the students who rallied. “We’re just going to have to hold together and see what happens, and react and be proactive,” she said.

Nov. 17, 2016: CSUN students assembled a protest on campus in response to Trump’s comments on how he intends to move forward in terms of immigration. Despite sending a letter to students in which Harrison denounced the idea that immigrant CSUN students should feel threatened, some students felt it was not enough.

Nov. 29, 2016: After Trump was elected president, CSUN students voiced their concerns for how his policies will affect them. Protests were held on campus following Trump’s election and in response Harrison held a Town Hall meeting. The main concern among students was if CSUN would uphold its sanctuary status. In response to worried students, Harrison said, “We’re following California law, just like the city of Los Angeles, like LAPD, and anyone else who says we are sanctuary. We’re doing exactly the same thing, but we’re just not using that term.”

Jan. 30, 2017: On Jan. 27, President Trump signed an executive order that would ban Muslim citizens from Iraq, Syria, Iran, Libya, Somalia, Sudan and Yemen from traveling into the United States. To ease the minds of worried CSUN students, Harrison released a statement in which she condemned Trump’s actions and made it clear that CSUN is a campus for all students, regardless of ethnicity, religion, nationality or sexual orientation.

Feb. 7, 2017: A new research building was announced to be built at CSUN that will be dedicated to research and is set to open in fall 2017. Harrison said the new building will continue the research momentum the campus already had, allowing it to excel in the years to come. Along with this, Harrison said the building will have a positive effect on not only the students, but the world as well.

March 29, 2017: In lieu of the Trump administration’s immigration policies, CSUN students were outraged when they found out Customs and Border Protection would be allowed to recruit at an on campus career fair. Harrison sent an email to students on March 27 warning them. In a Change.org petition created by the protesters, they state that Harrison “openly contradicted her statement of support by informing the Campus Community of the incoming presence of U.S. Custom and Border Protection recruiters on our campus on March 29th and April 5th.”