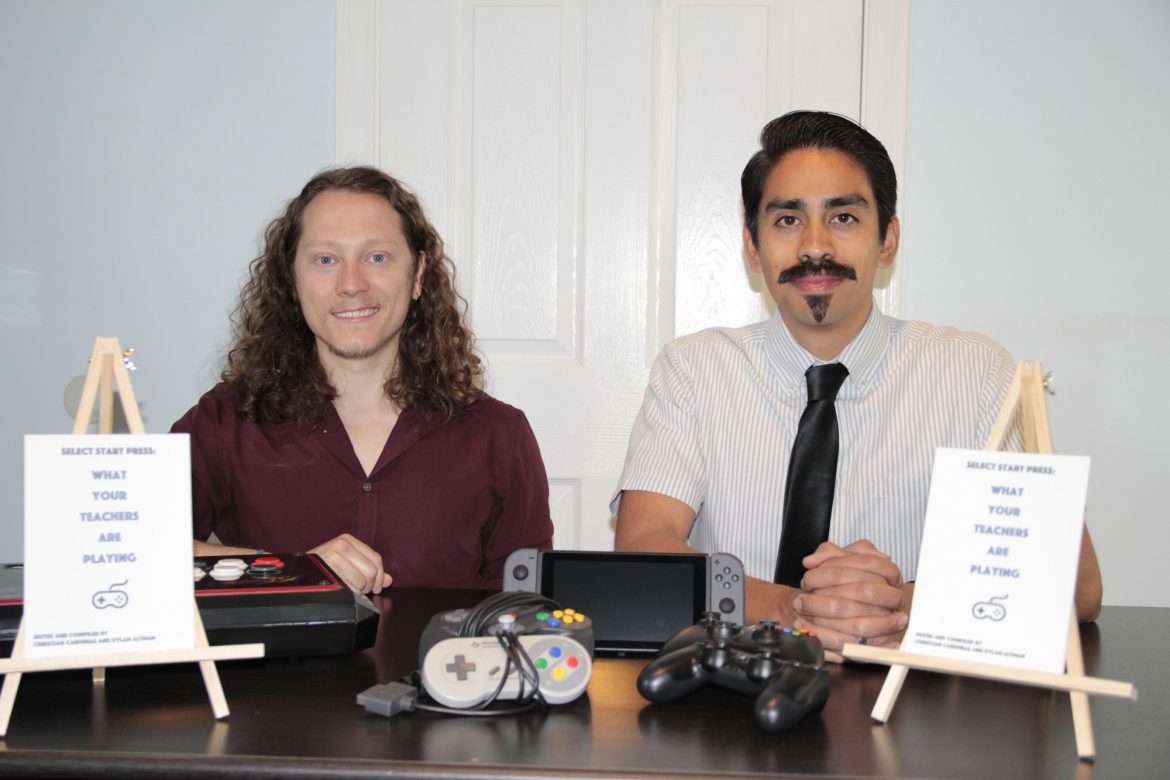 For two CSUN alumni, their passion for video games and active role in academia led to a new scholarly press that focuses on gaming culture for an educational audience.

The pair started the press because they noticed a lack of scholarly research on video games and their narratives. While other media, like movies and television have in-depth critiques, Altman said the press acts as a reference point for critical work on games.

On Video Games and Education

As educators, Altman and Cardenas know their audience is within academia. The first book published by the press, “What Your Teachers Are Playing,” is a collection of essays on different aspects of video games such as the technicalities of fighting game strategies in Street Fighter V and the post-human world of Overwatch.

In Altman’s class, he sometimes allows students to write a research paper on a topic of their choice. One time, a student proposed a paper on Bioshock Infinite, which discussed race relations and class dynamics within the fictional floating world of Columbia.

“When students have this kind of emotional investment in a text, whatever text it might be, it gets better work,” Altman said.

One of the challenges Altman and Cardenas face in the classroom is having video games as an accessible text for all students. Cardenas has an easier time because his teaching is one-on-one with his students, so he can readily tailor students’ gaming interests to lessons. Altman, on the other hand, struggles with incorporating a single game for the classroom because they require a console to use.

On Gaming and Feminism

Both men consider themselves feminists and believe there is room for feminism and greater representation of women in gaming, in addition to pop culture as a whole. Feminism is an especially troubled concept in gaming, as the community pushes back against feminist criticism.

“This conversation is difficult to have because of the tensions that it espouses,” Cardenas said. “There’s this kind of ‘don’t take away the fun I’ve had with these sexualized video games,’ but we still need to have theses conversations because we hold other mediums to these same standards.”

The men bought up who they feel are strong examples of female characters in pop culture. Altman mentioned Zelda from “The Legend of Zelda,” who dons an alter-ego, Sheik, and subverts the damsel in distress trope. He also said Eleanor Ripley from the movie “Alien” is an ideal example of representation since the character is not explicitly ‘gendered,’ or any attention drawn to the fact that she is female.

Overwatch’s Tracer is another current, norm-breaking character since her being lesbian is not her defining trait. Altman feels this type of representation is the right direction for the video game industry.

“They just happen to be female, that’s not the focus of the character, or happens to be gay and that’s just a part of them,” he said. “It’s just another facet of their individuality, which is important.”

Cardenas praised the character Aloy from Horizon Zero Dawn for the same reason. He said it was refreshing to see a character who’s strength is not detracted by their sex.

Their next book going to publication focuses exclusively on women, titled “Heroines in Gaming.” The Bechdel Test, which examines whether female characters are able to hold conversations without discussing a man, came up during their discussion of feminism.

“[Heroines and gaming] It’s a very worthwhile conversation to have and hopefully it will challenge the norms and inspire different types of games,” Altman said. “And bring this conversation up in a scholarly way so people won’t just get angry but get active and maybe change the texts.”

Despite their support for a critical feminist lens examining video games, the educators feel some outlets are too judgmental in their first impressions, such as Sarkeesian’s Feminist Frequency YouTube channel where she started a series called “Tropes vs. Women in Video Games.”

While the main focus of Sarkeesian’s series is to dismantle the ways video games stereotype against female characters, Cardenas disagrees with some of her judgments. He feels that characters can simultaneously be sexual and strong and not just a sexualized being.

For the next book, Altman and Cardenas are actively seeking out female voices to ensure the content reflects women and their gaming experiences.

The press is accepting proposals for the book from anyone interested in writing on women in video games until May 15 through their website.