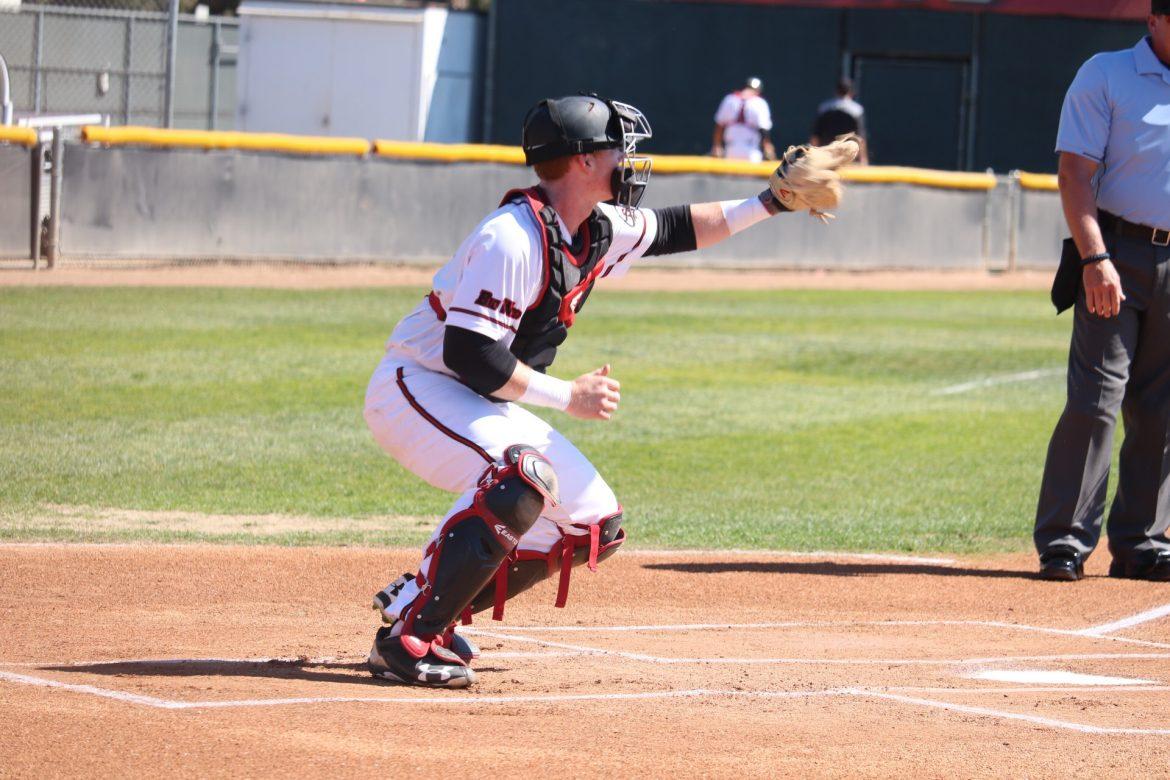 CSUN’s junior catcher, Albee Weiss, practices before the game against the Purdue Boilermakers, on Monday, March 13, at the Matador Field. Photo credit: Lauren Valencia/ The Sundial

CSUN baseball’s Albee Weiss has spent the past three years working as hard as he can to reach the mission he set out with his father years ago.

“My dad and I had a very common dream from the time I was a little kid, we always talked about me becoming a professional baseball player,” Weiss said. “Unfortunately, I lost him in junior year in high school, but all that did was motivate me to achieve that dream.”

Now a junior, Weiss hopes his name will be called upon by a major-league team in the upcoming summer draft.

Weiss played baseball since he was 4 years old. Growing up, his role models were not Derek Jeter or even Buster Posey, but his father instead. He was always there to watch Weiss play and his father taught him that humility was the key to success.

Weiss made the varsity team at Agoura High School as a sophomore. From 2012 to 2014, he helped the Chargers win three consecutive league titles.

However, during his junior year, his father, Carl Weiss, succumbed to lung cancer and passed away in 2013.

“During the hardest time of my life, baseball was one of those constants,” Weiss said. “It was a variable that was never changing. It was something I could go on and step in between the lines and put my blood, sweat and tears into it and take to take out any aggression I had against life on the ball.”

Weiss pounded his frustrations on the baseball. The harder he hit, the farther they flew. He hit .350 with 10 home runs as a senior.

With several offers to play baseball locally and outside of California, he decided to stay close to family.

Weiss found a new home playing for the Matadors in 2015. The 20 minute car ride from his mother’s home in Oak Park allowed him to always be nearby.

Baseball is Weiss’ passion, but he places family above the sport.

“It wasn’t because we had the prettiest stadium,” Moore said. “But I can guarantee it was to be closer to family. When young guys make decisions like that, you really have to respect that.”

However, the local kid struggled to get back to his high school ways in his first two seasons for the Matadors. As a freshman, he had a .199 batting average with five home runs and 22 RBIs on the season.

Weiss started eight more games as a sophomore, playing 55 games in total. His average had gone up to .219 on the season, but his other numbers had only slightly increased.

“If you have a hunger to be great at something, you can’t stop at anything,” Weiss said. “You can’t let obstacles get in your way and you can’t let time be a factor in hindering your success.”

He took every opportunity he had to get better at the game. Weiss played summer baseball for three years straight after graduating high school. He also played in Washington D.C., Wisconsin, Minnesota and Cape Cod in Massachusetts.

While many students take the summer off, Weiss was on the other side of the country playing baseball and learning to how to live on his own.

One of Weiss’ closest friends on the team said his dedication for preparation puts him on another level.

“The guy works harder than anyone I have ever met,” outfielder and relief pitcher, Justin Toerner said. “That has not only made me better, but it has made everyone on the team better.”

Weiss takes pride in preparation even if it means showing up hours early to get some hacks in before the game or hitting the gym after practice is over.

“Preparation is the most important thing in baseball,” Weiss said. “One of the things that helps me have confidence when I step in the batter’s box is understanding that I did everything I can to prepare for that day. If we have to be at field as a team at noon for a three o’clock game, it might be a little excessive, but Justin and myself are usually there at eight or nine in the morning.”

Weiss leads the Big West Conference in home runs (10) and RBIs (42). Despite the resurgence of his power as a junior, Weiss said that minor changes were the result of his improvements.

“I got a little bit simpler in the batter’s box,” Weiss said. “I narrowed down my approach and started feeling okay hitting the breaking ball the other way. It’s doing those simple things in the box over and over again that has created some good results.”

Despite having the best statistical year in his college baseball career, Moore said that Weiss’ actions speak for themselves.

“Numbers are numbers,” Moore said. “I look at decision making. Albee has made very good decision to not only improve himself, but to help other people including his family. I look for Albee to keep making quality decisions and get better.”

The Matadors average about a home run a game. They have a conference leading 42 home runs and Weiss is right in the middle of that production.

Every time he hits a home run and crosses home plate, he points up to the sky in remembrance of his father.

“It’s an essential factor of understanding that he’s up there looking down on me every day,” Weiss said. “The biggest thing I can do is to be able to go out every day and understand that he instilled ideas in me to work hard and be humble every day.”