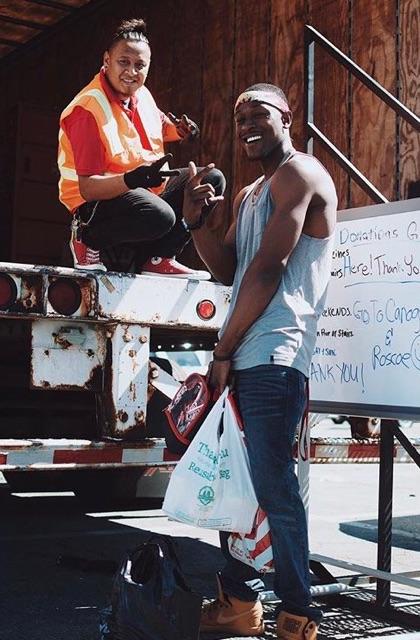 When 23-year-old junior and business major Langston Ennin is not making music or working, he’s planning what he’s going to do next with 1&1, a company he created in January 2016.

With 1&1, he throws donation-based parties at different college campuses and so far has gathered over 14,000 donated items.

Ennin’s main goal is to take the donations to his home country, Ghana, along with building a school, teaching people how to network, how to be financially literate, and get people thinking to work creatively. But for now, he shared his experiences with The Sundial after a year of commencing his project.

What was the process of getting over 14,000 items for donation and how does it feel to have gotten that many donations?

Ennin: It’s a pretty simple process, we just throw parties. It costs $10 to get in but if you bring socks, a can of beans, a book or pencils, the price goes down to $5. That’s how we get donations.

What’s the most recent event you had?

Ennin: We threw a birthday party last weekend for some students that go to Cal State Northridge. Any time I throw an event, it’s donation-based. So basically, some kids at school get the idea, they tell me they want to make it a donation party, and we make it happen.

So you do collaborations?

Ennin: Yea that’s the whole point. 1&1 stands for 1 College, 1 Party, 1 Donation and the goal is to go to as many colleges as possible to see who turns up the most, see who donates the most and then throw crazy parties.

What motivated you to start 1&1 and how did you make it work?

Ennin: When I first came to CSUN, the parties were basically [not good] so I thought, maybe we should throw some parties but make a difference. Then I was talking to some people at my job … and I just had this idea where you just wear whatever you want to donate to the party. After we did that I thought we could do every party like these, all you have to do is just bring some stuff and you can get in for cheaper. Obviously people didn’t really understand it at first. Some people thought it was a good idea but weren’t that supportive.

As opposed to when you first started, in what ways have you seen your creation grow?

Ennin: Now, when we do parties, it’s not just CSUN, now it’s CSUN and UCLA, Cal State LA, Loyola Marymount. We have a bigger team on campus. I’ve added a few more people on my team this year. We just start to work together, throw more parties and make more donations.

When you donate, where does it all go to?

Ennin: It depends, honestly. It’s all about the collaboration and creativity. We donate to fire departments, churches, rescue missions, salvation army, to the CSUN food pantry. Anywhere really. If somebody tells me about a new place, I’ll go there. It doesn’t ever get boring.

How can people reach out to you if they want to attend an event or collaborate with you?

Ennin: They can just hit me up on Instagram (lambo_). Direct message me and tell me where you want to throw the event. I’ll make the flyer and pay for ads on Facebook in that city. Everybody at CSUN helps us with the reposts because they like the helping the homeless aspect. We get a lot of support, so we get a whole bunch of people seeing it and they usually end up pretty good.

How does it make you feel now that you’ve expanded to college campuses outside of CSUN?

Ennin: It feels good because it’s exactly what I was thinking it would be. Just going around to different schools and everybody seems to receive it pretty well. When I tell somebody about it, they say something like: “Yeah, I respect that. I got some stuff in my car,” and they go to their car and bring stuff to donate. It’s dope, especially to go from city to city and get that same love.

It’s not always the same love as Northridge just because this is where I was born and people I met here last year are supportive. Now we have little things called ‘donation station’ in different buildings where kids just donate, they just fill it up. It’s crazy because just the other day we got about 2,000 pieces: pencils, a backpack, notebooks, notecards, makeup, all type of stuff out of nowhere. We make sure it gets the the right people and in the right hands. Creativity is really powerful and we always try to incorporate as much creativity as possible.