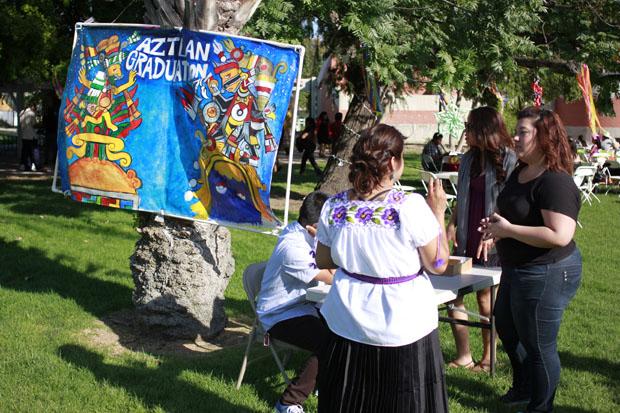 Students gather in front of the registration table for CSUN's Aztlan Graduation Ceremony for the Spring 2013 which was held on May 18 on the side of the Chicano House on campus. Featured keynote speaker was Dr. Christina Ayala-Alcantar. Photo credit: Luis Rivas

For cultural groups who have been systematically discriminated against in the United States, college graduation ceremonies can be purposed as an event of solidarity and support, as a young person completes their life as a student and begins their life as a “real” adult.

“Graduation is about more than just getting the degree,” said MaRonda George, a child development major and president of Zeta Phi Beta. She is participating in the 2017 ‘Black Grad’ to celebrate within her community and have a chance to appreciate all of the accomplishments of her fellow black students.

According to Sarina Loeb, the Pride Center and LGBT Initiatives coordinator, students tend to participate in Rainbow Graduation because it is a more intimate ceremony that includes most of their friends and people within similar social circles.

George, who helped organize this year’s event, said she wanted to participate in Black Grad because she wants to celebrate within her own community and have a chance to reflect on all the accomplishments of her fellow black students.

According to George, as many as 200 students RSVP’d for this year’s event, right on par with last year. George stated that there is not a cap on the amount of people a black grad participant can invite to a ceremony and that anyone in the community is welcome to attend.

Loeb also noted that Rainbow Graduation is not solely for students who identify as LGBTQI, but that the ceremony is open to all who feel connected to the community, whether or not they’ve disclosed the details of their sexuality or gender identity.

Last year when George participated as a volunteer at Black Grad, she recalled there being over 1,000 people in attendance, and she expects a similar turnout this year. The event will include spoken word performances from students, a performance from the African Student Association dance team and “all the little things that come from [black] culture and make it a great experience.”

Leroy Jeter, in an essay about the history of Black Grad, wrote that “the Black Graduation Ceremony was specifically designed to help graduates remember their graduation day and commencement activities with a unique African American centered graduation ceremony that they cherish for a lifetime.”

Black Graduation was first held at CSUN in 1972. Since then, the Department of Pan African Studies, the Educational Opportunity Program and A.S. have each contributed to the event.

Similar to Black Graduation, Rainbow Graduation is a ceremony that celebrates students and allies of LGBTQI community. It was founded in 2008 by the Queer Studies Program and has since been hosted in collaboration with the Pride Center.

Jennifer Argabright, a child development major, will be the first in her family to attend and graduate college. She said her road to graduation was not an easy one, so to fully appreciate the amount of effort she had to apply to get there, she wants to participate in a graduation ceremony that meant more to her.

“For me, Rainbow Graduation is a much more intimate and cultural ceremony,” Argabright said. “Everyone wants to be there, and everyone who attends has much more invested in it than a regular graduation.”