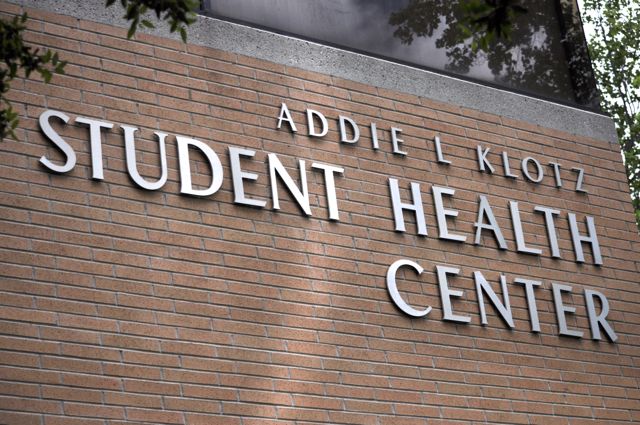 The Klotz Student Health Center, located on Dearborn St., serves as a resource for students to educate themselves on safe sex. Photo credit: Marja Ziemer

It was a muggy summer night in the depths of Southern Mississippi when my childhood friend confided in me that she had found the holy grail of making her boyfriend last longer in bed—a problem that had supposedly been straining the relationship for the whole two months of unintended, to say the least, “quickies.” She put her hand to the side of her mouth to obstruct the gaze of any passersby and whispered, “Two condoms. It completely kills his sensitivity and makes him last as long as we want.” The best part of this was, “Plus, it’s twice as safe! Nothing’s leaking through double layers.”

While it would be easy to assume that most people might immediately be able to spot the fallacy in this method, my friend was not alone in this line of thinking. This is just one instance of yet another sexual rumor that had turned from myth to truth in the mind of an uninformed, not by her own choice, sexually active woman at risk.

Modern-day sexual myths are extremely common on an international scope and can lead to STIs, unintended pregnancies and a plethora of other health complications. In the United States alone, where comprehensive education for all is often paraded as a valued tenant, misinformation runs rampant. Statistically proven to be the most sexually active group, college students, especially, owe it to themselves and their partners to practice safer sex.

Following is a selection of some of the most common sexual myths believed by the average college student. While some might get a snicker or eye-roll, it is imperative to remember that the believer is a victim of an incomplete sexual education, hardly ever by a fault of their own. We all believed a sexual myth or two at some point. Middle school anyone?

To address the previously mentioned “solution” that my friend proposed, two condoms actually increase the risk of condom breakage, due to the friction that is created between the two barriers of latex, or whatever material of which the condom is made. This breakage immediately increases the risk of unintended pregnancy and STIs.

Another mythical concept that seems to invade college campuses is that you cannot contract an STI from oral sex. In fact, oral sex is one of the more frequent ways that STIs, such as chlamydia, gonorrhea, or syphilis, can be spread.

In speaking to yet another friend in Mississippi, not coincidentally still within the state in which most sexual-education programs are abstinence-only based, she insisted that she could, in fact, get pregnant if she kissed a boy who was wearing a wet bathing suit or vice versa. In truth, pregnancy can only occur if semen enters the vagina – this is not to discount the unlikelihood (but still tangible risk) of semen landing near the vagina that can still enter her reproductive system. Last but not least, in wake of the AIDS scare of the 1980s, there is still a hint of fear that can exist within someone who believes they have simply touched a person who has HIV/AIDS. Although you cannot tell who has HIV/AIDS just by looking at them, the virus is impossible to contract outside of sexual contact and the virus itself dies immediately when exposed to air, meaning that there is no risk of contracting HIV from a toilet seat, payphone, or used gym-equipment.

Sexual myths have no place in the minds of today’s sexually active college students. Staying informed and safe is the best way to keep yourself and others healthy. When it comes to sexual myths, remember: don’t be ashamed of what you don’t know. The only “stupid question” is the question left unasked.