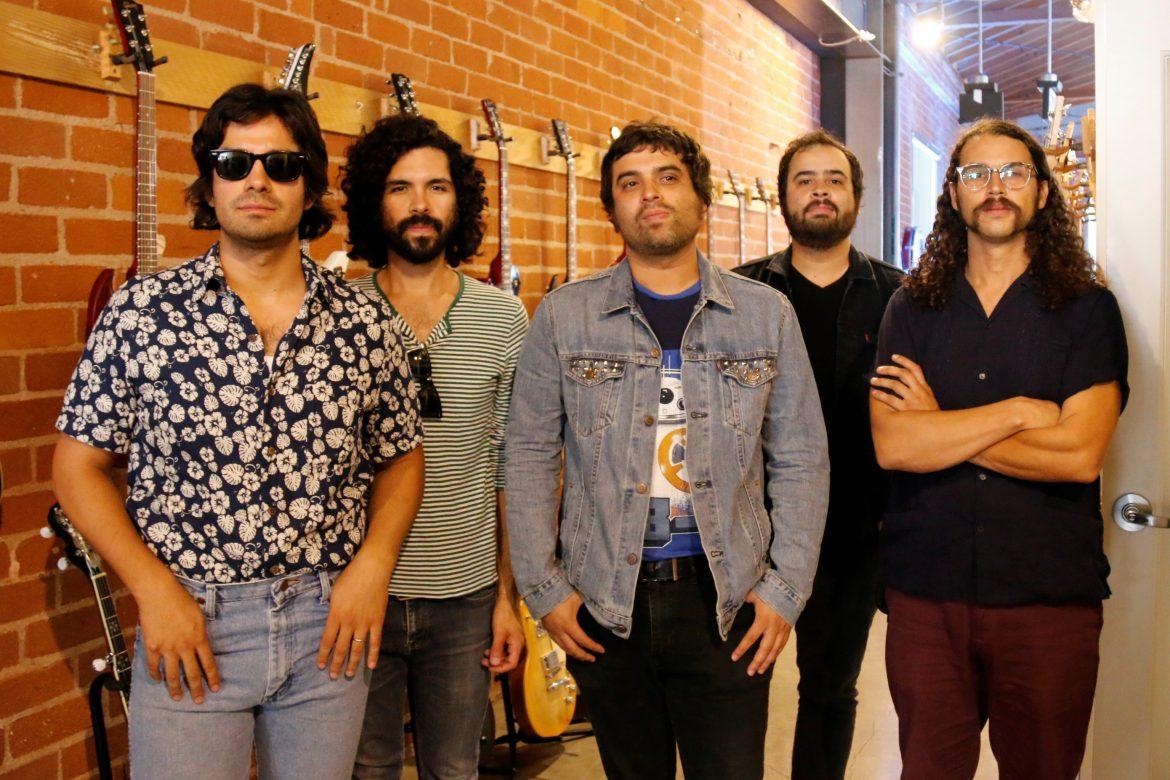 “Imperfecto Extraño” is the newest album by the Mexican band Enjambre. A prominent force in the Latin Alternative Rock scene, the group comes back with an album characterized by influences of the psychedelic rock era of the late 1960s and 1970s. This latest release is a continuation of the unique sound they have been creating since their 2014 release “Proaño.”

Since their third album “Daltonico” released in 2010, the band caught people’s attention because of their sound and the unique voice of singer Luis Humberto—who has been compared to artist Jose Jose by fans and critics.

The sixth album comes after more than a 10-year trajectory. Their fans have seen Enjambre on the rise with each release of new material and this album is no exception. Recorded at Sonic Ranch studio where bands like The Yeah Yeahs and Beach House have previously worked, the band is now touring across the U.S. and Latin America to present their new album.

Perhaps it’s the sophisticated look of the boys a la Kings of Leon or the logo’s resemblance to Rubber Soul that also makes them stand out. To clarify these assumptions, and for a more focused insight on the band, The Sundial sat with keyboardist and bass player Julian and Rafael Navejas at the Gibson Showroom. They spoke about the influences of the album, the appearance of one of their songs in a famous TV show, and their decision to move from Los Angeles to Mexico City.

Is there a heavy influence of 70s music on the album?

Rafael: Yes, there is. It’s common that we hear references of 70s records. We´re not trying to do something 100 percent from that decade.

What do the lyrics of your singles “Ent tu día” and “Tercer Tipo” mean?

Julian: Luis Humberto writes most of the lyrics. These songs were written by him, but we like for people to interpret them however they want, that’s why he writes in a metaphorical way. It’s the way he expresses his personal experiences.

How about the name of the album? Does it signify anything?

Rafael: It’s a small wordplay. There’s a saying that goes “perfect stranger,” but the title of the album refers to the connection between us and the audience. Maybe we don’t know them personally but there’s a link in the music we make, that way they become “imperfect strangers.”

In the case of “Nudo,” how did this instrumental come about? Did it start improvised or what is it carefully designed?

Julian: “Nudo” was a song that had been inside Luis’ head for quite some time. Strangely enough, the song was made in the studio. One would think it came out of a jam, but this one was more planned.

I heard the band for the first time through the Mexican TV Show “Roomies” where one of your songs was featured in the end credits. How did this collaboration happen?

Julian: One of the directors is a friend of ours and he invited us. The show was cancelled, unfortunately. He said, “I thought I was doing the band a favor, I didn’t know Enjambre was going to turn into a huge band.” It turned out to be backward. Many people heard of the show because of the song. Even in the music video of the song you can see comments that ask who are the people in the video because the cast of the show participated.

Did the success of this song change the course of your career?

Julian: It’s difficult to say that that was what made all the difference, but it was something that added up. One of our songs “El Ordinario” came out in the film “Mexican Gangster” and we actually won an award for that song.

You guys started out here in California but what made you base yourselves in Mexico City?

Rafael: Mexico is an important place in the music industry. We noticed the opportunities we would have over there compared to here in L.A., since at that time there wasn’t so much Rock in Spanish. So we made the decision to go and develop the project. Now we’re happy to come back here to L.A. There’s an audience hungry for music in any language as long as it’s good.

Does the tour of the album continue?

Rafael: Yeah, and we actually made a new goal for ourselves, which was to tour the US more often, specifically here in L.A. For now, we just did a show in Chicago and [California] but we’re hoping to come back pretty soon.

The album is available on all physical and digital media forms.