Investing in diversity pays off 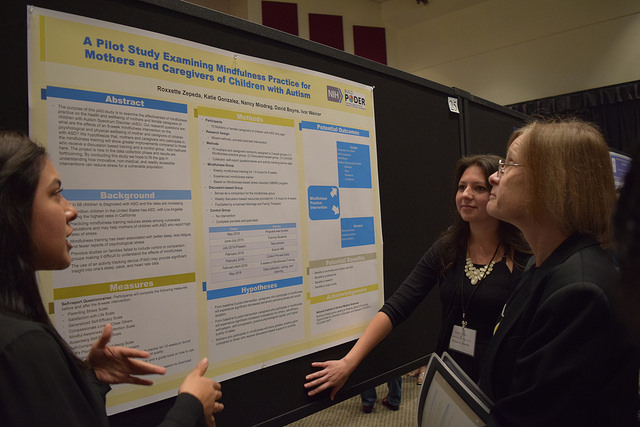 Earlier this year, I let out a sigh of relief after hearing that Congress rejected President Donald Trump’s proposal to slash the National Institutes of Health’s (NIH) budget by 20 percent. Instead, it was increased by $2 billion. However, considering the anti-science priorities of this Administration, I know I must expect and be prepared for future attacks on scientific research.

This is a highly important matter for me because my success as a student of color pursuing a scientific career has been greatly shaped by the NIH. I am one of the first nine graduated students who completed the NIH-funded undergraduate biomedical research training program, BUILD PODER (Building Infrastructure Leading to Diversity, Promoting Opportunities for Diversity in Education and Research). With a $22 million budget spread across five years, BUILD PODER is the largest grant-funded program in CSUN’s history, serving about 50-75 students every year.

I am a Mexican woman who, because of programs like BUILD PODER as well as the CSUN Education Opportunity Programs (EOP), was not only the first in my family to graduate with an undergraduate degree, but also the first in my family to be accepted into a prestigious graduate program in nursing at the University of California, Los Angeles (UCLA). I plan to become a NICU nurse and do neonatal research, which is rare for nurses in general, much more for female nurses of color.

If Congress cuts the NIH’s funding in the name of “balancing the budget,” “securing our borders,” and “strengthening our defense,” not only will millions of dollars worth of crucial research that impacts and saves millions of lives disappear, but the recent effort to diversify the scientific field will slow almost to a halt – diminishing the already few opportunities that minorities, women and the socioeconomically disadvantaged have to contribute to scientific research and practice. This will create long-reaching adverse effects on our economy, security and success as a nation.

Diversity is a problem in the scientific fields. Of the estimated 8,650,000 people in the scientific workforce, 84 percent are white or Asian men, whereas white men represent only 31 percent of the U.S. population and Asian men represent 3 percent. In recent years, less than 9 percent of STEM PhD recipients were Hispanic, Black and Native Americans, whereas they make up 30 percent of the U.S. population. According to the Association of American Medical Colleges, there were 27,425 male professors in U.S. medical schools, but only 7,758 women professors as of 2015.

Though I’m excited to begin my graduate career at UCLA, I will be one of maybe a handful of Latinas in my cohort there. Though this can be discouraging, I know this is yet another opportunity to rise above and disprove any stereotypes about Latinas in education. I’ve learned how to cope with the challenges of being a minority and socioeconomically disadvantaged while trying to succeed in a majority-white or privileged settings.

I learned many of these coping skills through EOP and BUILD PODER. EOP helped me get into CSUN, as well as transition from high school to college through their six-week residential summer bridge program. They taught me about time management, classroom etiquette and how to code switch (when to speak in a “professional” manner and when to speak as I did growing up in East Los Angeles). BUILD PODER helped me prepare to apply to graduate school by teaching me how to write personal statements and a curriculum vitae, present in front of others, and conduct original research. BUILD’s institutional resources provided me with free tutors, financial assistance, and BUILD-specific classes that enhanced my critical thinking skills.

Both programs also provided me with two strong communities. As an underrepresented person in academia, it is just as important to receive personal support, especially when dealing with issues that people in my community also experience. It was encouraging to be around others who, like me, have ambitious goals and refuse to let their circumstances define their lives.

For some, promoting diversity in general is low on their list of priorities. But a dedication to increasing diversity will not only make our society more egalitarian and progressive, but healthier, stronger, and more sustainable. The mission of BUILD PODER is to reduce health disparities between underrepresented communities and communities of privilege, and to frame health equity as a social justice issue so that all people can thrive regardless of their background. Increasing diversity in research is vital to reducing health disparities, as scientific research itself focuses on white populations–since the 1993 NIH Revitalization Act, less than 2 percent of over 10,000 cancer studies have sampled a significant amount of minorities.

By increasing diversity within the research workforce, we will increase studies focusing on minority communities, improve health for the underrepresented, and save the U.S. healthcare system over a trillion dollars in racial health disparity-caused medical costs. This is why our government should never sacrifice scientific research and should value diversity initiatives like BUILD PODER as an investment in the economy, our national security, and national strength. I am living proof that the focus on diversity works.