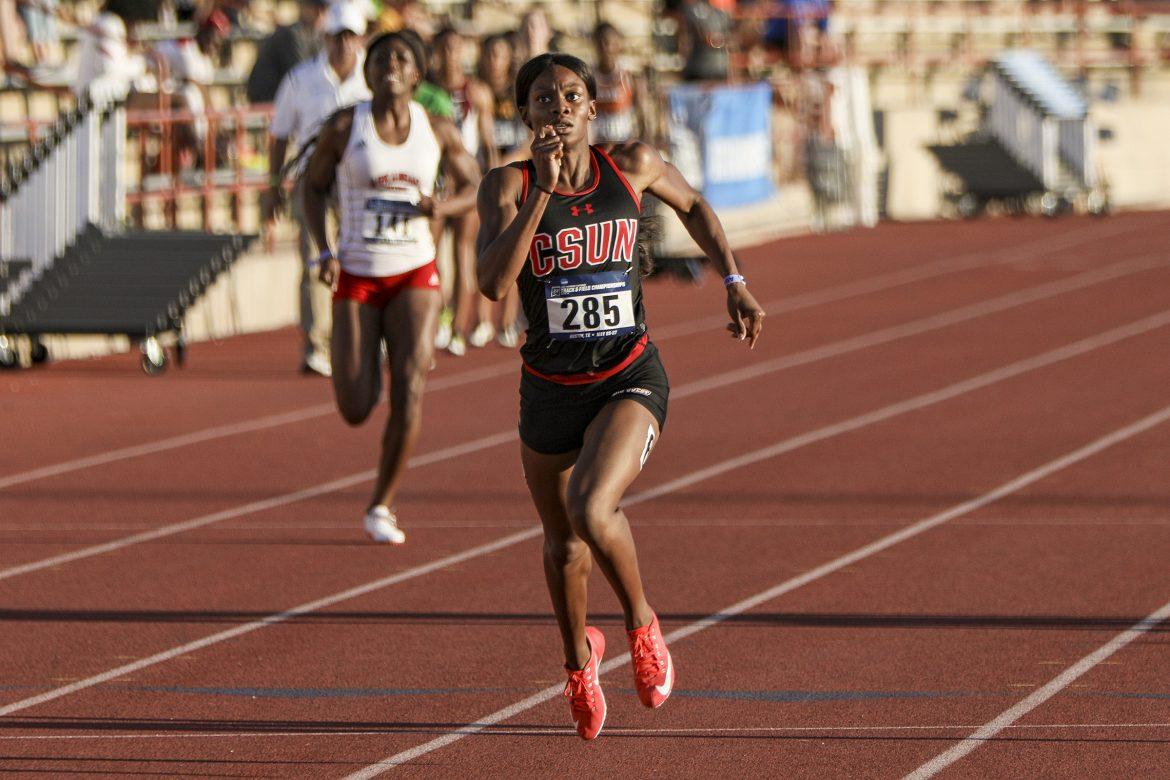 The women who represented the CSUN women’s track and field team in nationals received All-American honors, including Monique Griffiths who was an All-American in two different events, the discus and hammer throw.

The other four chosen were Lexis Lambert, Courtney Robinson, Asheley Bamberg and Marie Veale after their performance in the 4x100m race.

Going into the NCAA championships Griffiths, senior thrower, was ranked sixth in the nation in the hammer throw and 51st in discus.

Griffiths threw 63.24m in the hammer throw and she finished in 11th. Two days later, she threw again for women’s discus and finished 16th in the competition by throwing 53.33m in her first flight to receive All-American second team honors.

Griffiths’ first major competition was her freshman year in the Big West championship. She threw a 48.88m in the hammer throw and has increased each season. Her personal best in the event in 2017 was a 65.82m.

“Being able to continue to increase my personal best every year is a feat and I am very humbled to have been able to do so,” Griffiths said regarding her improvements.

Lexis Lambert, Redshirt senior, was a huge part in the CSUN women’s track and field success. Not only was she the Big West Women’s Track Athlete of the Year, but she also received second team All-American honors at the NCAA Track and Field Outdoor Championships.

The feats could not have come at a more opportune time as Lambert was finishing her senior year and last year in collegiate sports.

“I’ve had ups and downs, it feels nice to be able to become apart of CSUN track and field history and make my mark as I completed my last year,” Lambert said. “I think what really drove my success was the fact that it was my last year competing at the collegiate level.”

Lambert not only ran the 4x100m, but she also competed in her first individual event in nationals. She competed in the 400m and clocked in at 53.91.

“Nationals wasn’t overdue for the team, but qualifying in an individual event was definitely overdue,” Lambert said.

This team understood that transitions and challenges in life make or break people.

Junior All-American, Robinson, obtained her associates degree at a junior college in Arizona, transferred to San Diego State University [SDSU], and then to CSUN in 2016, but she has not let the transitions and challenges weigh her down.

“Coach Johnson [hurdle coach] called me one day and told me he had a spot for me and I took a leap of faith in him and never looked back, best decision of my life,” Robinson said. “Him and Coach Anderson were willing to give me a chance to redeem myself, and that was the biggest game changer.”

Even though Robinson became an All-American, she strives to achieve more.

“I had a different level of maturity this time around,” Veale said. “In 2013 I was competitive, but still kind of new to the sport, but this past year I had a different attitude, I was hungry and did not come to play around.”

Asheley Bamberg helped the CSUN women’s track and field team obtain their 44.44 time in the 4x100m relay. This is the second best time in CSUN history.

“The accomplishments of these women is the epitome of everything we have strived to achieve in this program,” Anderson said. “The family atmosphere we have as a team is what makes these dreams reality and these All-American accolades display the caliber of the women CSUN has in our track program at the national level.”

2017 Women’s Big West Coach of the year and head coach Avery Anderson was the person who coached the women’s relays this year.

“It gives me so much personal fulfillment to have coached seniors, Lexis [Lambert], Marie [Veale], and Asheley [Bamberg] through their five years of college,” said Anderson. “Also to watch Monique grow as a person and develop into one of the best throwers in the United States has been extremely special.”