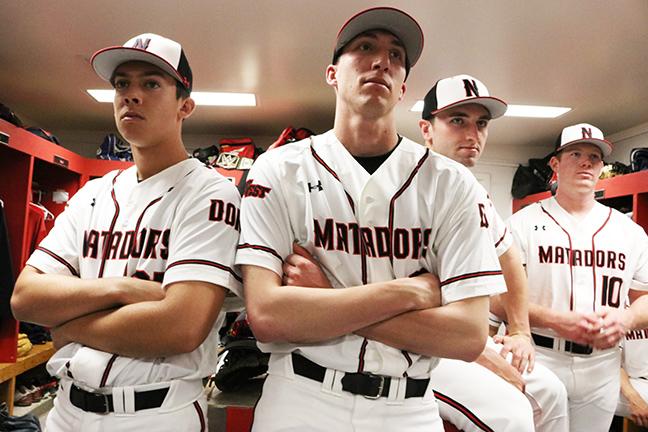 Members of the baseball team listen to their coach give them advice about how to deal with the media during baseball Media Day in the locker room on Tuesday, Jan. 14, 2016. Nikolas Samuels/CSUN

The NCAA has over 460,000 student-athletes, that compete in 24 sports nationwide. Even though eight out of 10 of these student-athletes obtain a bachelor’s degree, according to the NCAA website, the double lives these athletes undergo are not always easy.

There are over 300 students athletes that attend CSUN, and each have their own way of handling their busy schedules.

Erin Indermill, a junior woman’s volleyball student-athlete and co-president of the Student-Athlete Advisory Committee says she struggled early in her CSUN career prioritizing her time.

“School and volleyball are both huge time commitments on their own, but we also have to balance friends and family,” said Indermill. Managing the pressures of athletics and being a normal college student is plenty to distract student-athlete’s academic focus.

Indermill was challenged her freshman year academically when she received her first “C” in a class and she realized she needed extra help. “I began seeing a tutor regularly, spent more time in the Matador Achievement Center and my grades have improved dramatically,” said Indermill.

The NCAA’s rules on not paying student-athletes have been argued more intensely over the past decade.

Though CSUN athletes do not get paid, Erin Indermill argues the NCAA makes up for it in other aspects. “The NCAA has requirements that help student-athletes tremendously,” said Indermill. “Most people only notice the gear we get each year, but we are required to receive meals on game days as well as traveling.”

Michelle Duan, a junior transfer student on the women’s golf team agrees with Indermill’s opinion. “In a way we do get paid through scholarships,” said Duan.

Financially, not all NCAA student-athletes are privileged. Being a student first and athlete second can consume a CSUN athletes weekly schedule. But, it helps to have family support throughout their collegiate journey.

“My parents worked hard to get to where they are today and they’ve given me endless support to pursue golf,” says Duan. “I could never repay them fully for all they’ve done for me.”

Michelle Duan doesn’t see the point in committing to something if you’re not all in. Duan said, “Hard work takes time, and it’s definitely worth it when you see it pay off through good grades and playing well.”

Jason Flowers, head coach of the Matadors women’s basketball team understands the struggle of being a student-athlete from his years of playing men’s basketball for UC Irvine.

“We [coaching staff] have people come in to talk to the team about budgeting and financing,” said Flowers. “We are here to develop them all around.”

Flowers understands that student-athletes are still maturing in life and wants to help guide them in their time at CSUN.

“There are some coaches in the NCAA that are here for the right reason, and that is the development of young people,” said Flowers. ” The coaches here take that approach and to help, we try to help find them jobs on campus.”