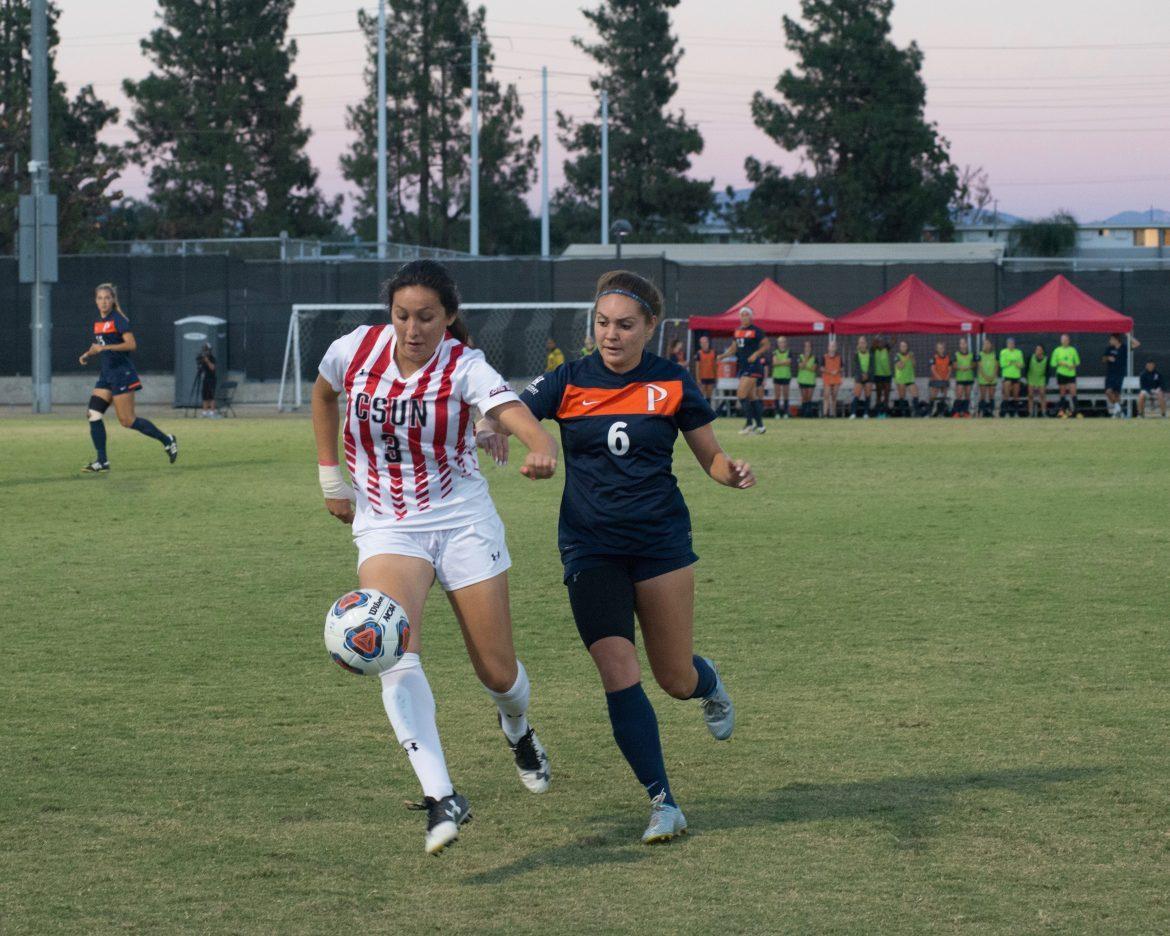 Marissa Favela found the ball at her feet late in the game while fighting scorching heat for the Matadors. When her team needed it the most, Favela ripped a shot past goalkeeper Sarah Davis two minutes into overtime for the game winning goal and giving CSUN the 2-1 victory over Utah Valley (1-3).

Favela was mobbed by teammates in celebration after her clutch moment sent fans home with more to cheer about. The goal gave the Matadors (2-0-2) their second consecutive win and their fourth straight result without a loss.

Favela has now scored in three consecutive games and has registered four points within that span. She also assisted on a corner kick to Ariana Tran in the 19th minute. Tran threw her body into the outside post and headed it past the goal line for her first goal of the season.

“I usually sit on the keeper every corner kick,” Tran said. “I just got a head on it and it went in. I’m just glad that we finally made it. I’m in front of the keeper almost every game and I’m just excited that Marissa got that really good cross so then I could get that goal.”

Things didn’t come easy for the Matadors after not allowing a shot on goal in their previous game against Houston. In the final five minutes of the first half Utah Valley had three shots on goal and hit crossbar, but CSUN came out unscathed. In the second half, Wolverines leading scorer Breanna DeWaal added her third goal of the season after putting a shot past Jovani McCaskill in the 60th to tie the match at 1-1.

The final 30 minutes of regulation were contested physically as both teams attempted outlast one another. Ultimately Tran paid Favela back in the 92nd minute with an assist of her own and to send the Matador faithful home happy with the win

“At the end of the day, we stuck to it.” coach Keith West said. “When you stick to things, good things happen to you.”

The game itself was moved to a 10 AM start in an attempt to avoid the high temperatures. However neither teams were hit by the heatwave and by halftime, game conditions reached to 102 degrees. During the match referees called mandatory timeouts in the middle of each half so the players could rehydrate The scorching weather in some ways gave the Matadors a slight but uncomfortable advantage according to Tran.

“Just because we are used to playing in the heat, doesn’t necessarily mean we like it,” Tran said. “At the end of the day though we managed to work through it and we were the stronger team at the end.”

CSUN will finish its four game homestand Thursday night at 7 p.m. when the Matadors take on Fresno State and Favela said her team’s priority now is rest,

“The biggest goal for us now is to recover our bodies, get back at it on Tuesday so then we can be ready for them on Thursday,” Favela said.