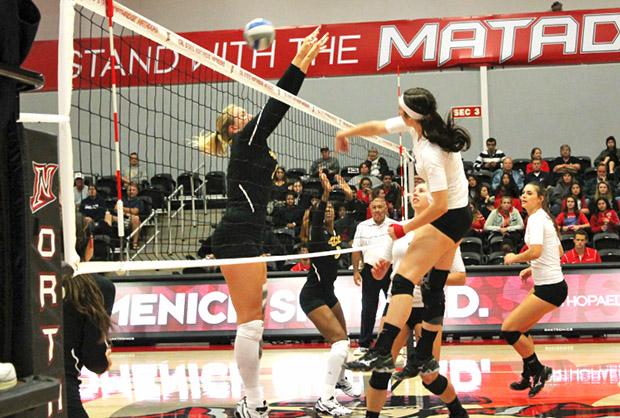 The Matadors have now won four and row, losing only one out of their last 13 sets. Photo credit: Abigaelle Levray / Daily Sundial

Zack Rome
Northridge has been unstoppable lately and took out another opponent standing in their way Friday night.

“We lost to them in five sets the last two times we played them, so I think we were just ready for revenge,” said CSUN Outside Hitter Aeryn Owens, who led her team with 19 kills.

Northridge came out with way more energy than Pepperdine to start the game as they took the first two sets in convincing fashion 25-18, 25-12.

The Matadors fed off the crowd’s energy as it seemed that when the Matadome got louder, the results of the plays went CSUN’s way.

“We have 16 players but we think we have a 17th in the crowd. The energy flow is always better when you’re at home,” said CSUN head coach Jeff Stork.

After it looked like CSUN was going to take an easy three sets to none victory, Pepperdine awoke in the 3rd set and after calling a timeout at 21-21.

The Waves would rally off four consecutive points to prevent the sweep and win a set for Pepperdine.

“In volleyball people talk about momentum, but I think it’s about steady play,” said Stork. “Throughout the match Pepperdine was getting better and better. And they weren’t making the types of errors that they had in the first two sets.”

Northridge regrouped in the fourth set with key plays by Nada Dragovic and Rachel Diaz. Pepperdine managed to tie the game at 23-23 before a CSUN timeout gave the last energy the Matadors needed to take the final set 25-23. Lauren Conati led the team in assists and even helped her team out defensively with three blocks.

“We came out with a lot of fire tonight and I think we knew from the beginning that we weren’t going to give up. I think the team relied on each other tonight and I am super proud of them,” said Conati. “The energy was amazing.”

CSUN now has three consectutive wins after starting the season 0-2.

“If we keep winning like this, I think more and more people are going to come out and watch,” said Coach Stork. “And the girls love the support. It’s always a better environment emotionally at home as well. I’m proud of what the girls are doing because it’s emotionally and mentally draining to keep that focus through long periods of time, but we’re also going think about Northeastern tomorrow.”

The Matadors play Northeastern tomorrow at 1PM in the Matadome as they look to go 3-0 to finish the Pepperdine-CSUN challenge.