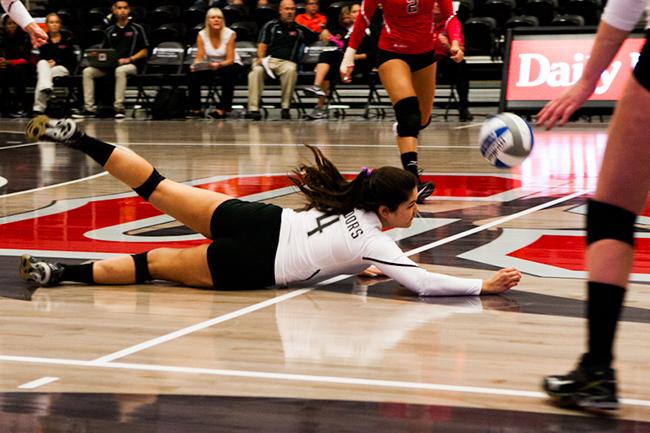 Over the weekend, Katie Sato led a resurgent women’s volleyball team to winning all three of its matches over the weekend at the CSUN-Pepperdine challenge held at the Matadome.

“We were all super pumped because we had never beat them before,” Sato said. “In the previous years we have had tough matches where we would lose in five and the types of games that would pull out your heart. So we were all very pumped up to play them at our house and we knew we had to come out strong.”

Sato averaged 5.2 digs during the three game series and added 18 digs and 2 aces in the Matadors win over Weber States. As well as, being named Big West Defensive Player of the Week.

“It’s awesome being named player of the week,” Sato said. “But I also owe a lot to our blockers who are funneling the balls to me and we’ve scouted a lot so it helped.“

CSUN also got sweeps over Weber State and Northeastern and the Matadors are on a four game winning streak after starting the season having lost two in a row. It’s the longest such streak for the program since 2014 when the team opened its season by winning five straight.

“We just have to stay focused,” Sato said. “Coach (Jeff Stork) always says that the most important game is the next one. So we are just focusing on the future games and taking it one at a time.”

The freshman has been solid in the last two games and at the forefront of the Matadors attack. Trejo scored a goal from 10 yards out in CSUN’s 2-1 victory on the road against 16th-ranked Utah Valley while adding a goal in a 2-1 loss against Saint Mary’s. Trejo has scored in two consecutive games and has proven himself to be a dangerous playmaker for the Matadors.