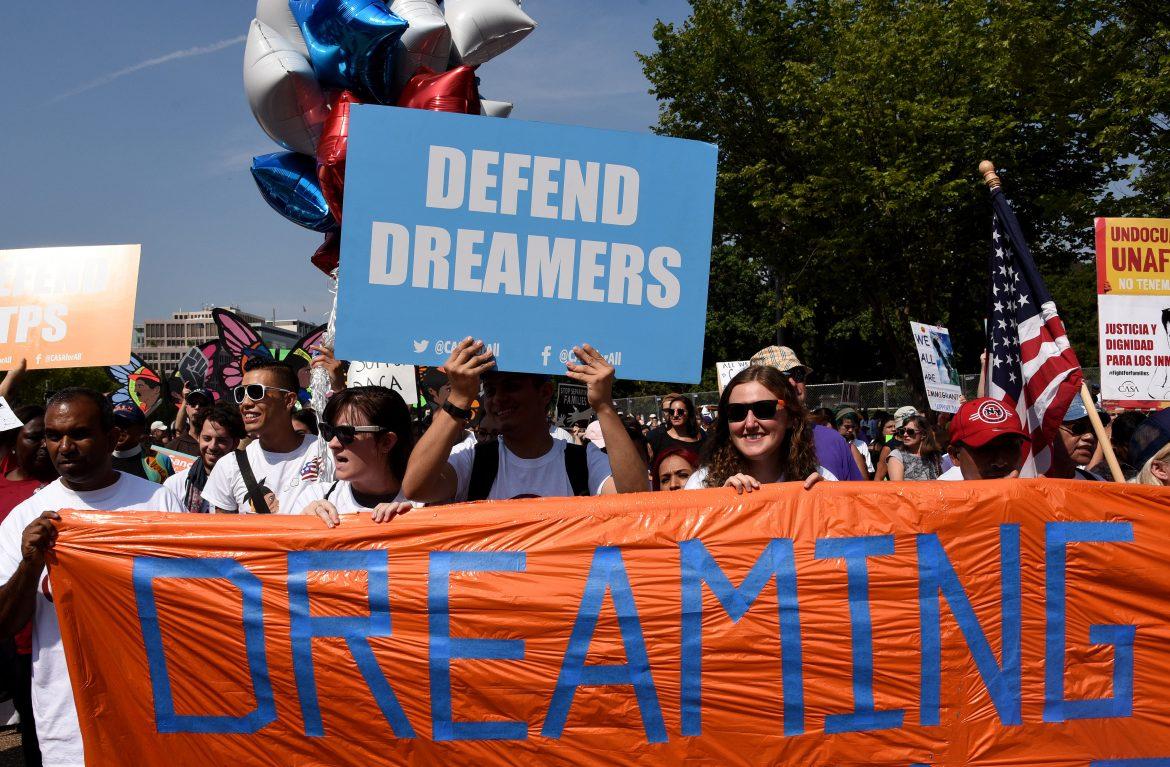 Protesters hold up signs during a rally supporting Deferred Action for Childhood Arrivals, or DACA, outside the White House on September 5, 2017. Thousands are expected to gather for rallies on Tuesday, when President Trump is slated to announce the future of the program. (Olivier Douliery/Abaca Press/TNS)

You may have vague memories of living somewhere else, of being brought to America as a child. Your parents aren’t citizens. As you grow up and come to understand such things, you learn that you aren’t either, but you’ve gone to school here, you’ve made friends here, you’ve made a life here. You’ve followed the path to remaining in this country that was made legitimate during former President Obama’s administration. Now, the threat of being deported to a country you haven’t been to since childhood looms in the near future. This is the situation facing DACA recipients, including some students at our own campus.

As a “sanctuary school,” a stance reiterated by CSUN’s President Harrison in an emailed letter on Aug. 31, CSUN is dedicated to protecting Dreamers from aggressions on the part of Washington, particularly Tuesday’s repeal of DACA.

DACA, to clarify, did not even provide undocumented individuals with citizenship. It merely protected those who were brought to the United States, illegally, while under the age of sixteen from being deported, if and only if they met certain criteria. These protected individuals included students, graduates or honorably discharged veterans of the Coast Guard or Armed Forces. It allowed them to pursue education or work for a two-year period before they had to reapply.

Regardless of one’s opinions on the legality of immigration, has America now taken to punishing people for the actions of their parents? Dreamers are not criminals. The Dreamers’ appearance in the US, by the definition of the colloquialism ‘Dreamer,’ occurred before they reached adulthood. They are young people who made a legitimate attempt to gain permission to stay in this country, to work in this country, to learn in this country. President Trump’s announcement on DACA on Tuesday, turns them into criminals and opens them to deportation.

The repeal of DACA snatches away these Dreamers’ opportunities in this country and, particularly as their information will remain in the system, many will also find themselves transplanted to countries they may only vaguely remember. Many of them have been in the US since early childhood, so is it moral to expel those who have grown up American merely because they were not born here? If they have proven themselves through their education, or as honorably discharged veterans, shouldn’t they be given the chance to remain in this country and forge a life in it through legal means?

Deportation was an issue of primary attention during the recent election, but few seem to pause and consider the consequences that would become reality for these men, women and children; an inability to find work or to continue a half-completed education and the sudden prospect of being torn away from friends and family.

While Harrison’s email reassured students that, following DACA’s repeal, protections will be enacted on CSUN’s part to shield current students, the consequences to future students and immigrants will be more detrimental and the inability to legally work in the US after graduation may cause former DACA students to be unable to use the educations they have received and for which they have paid.

Our country is rejecting individuals who could have been valuable and productive members of our society. Now, they must hide in the shadows. The decision to revoke their protection against deportation, when the only crime they have committed is to have been brought here as children, reflects badly not just on Trump but also on our country.

It seems cliche to say, but our country was built on immigration. In the modern day, it has developed a negative stigma. This is partially due to pushback against the current emphasis on the preservation of incoming cultures and partially to the idea that immigration leads to less resources and jobs for citizens. However, as demonstrated by California’s recent crop failure, which has been linked to the wave of arrests of immigrant farm workers, when a portion of the workforce vanishes the economy and the livelihood of others suffers. Deportation doesn’t help citizens, it harms them. While the full effect of the DACA repeal won’t be felt for six months, the same effect will likely be applicable to other professions too, with formerly legal employees forbidden to work and/or deported.

The logic of expelling those who contribute to the work force, who are educated and, in the case of some, have served in the Coast Guard or Armed Forces is faulty. Worse, it is morally deplorable. As a country, as a culture, we claim to value hard work. If someone has contributed, should they not be rewarded? We claim to believe every child deserves to learn. If someone has begun an education, is it not reasonable to allow them to complete it? We claim to look up to our veterans. If someone has served our country, why are they now being asked to leave it?