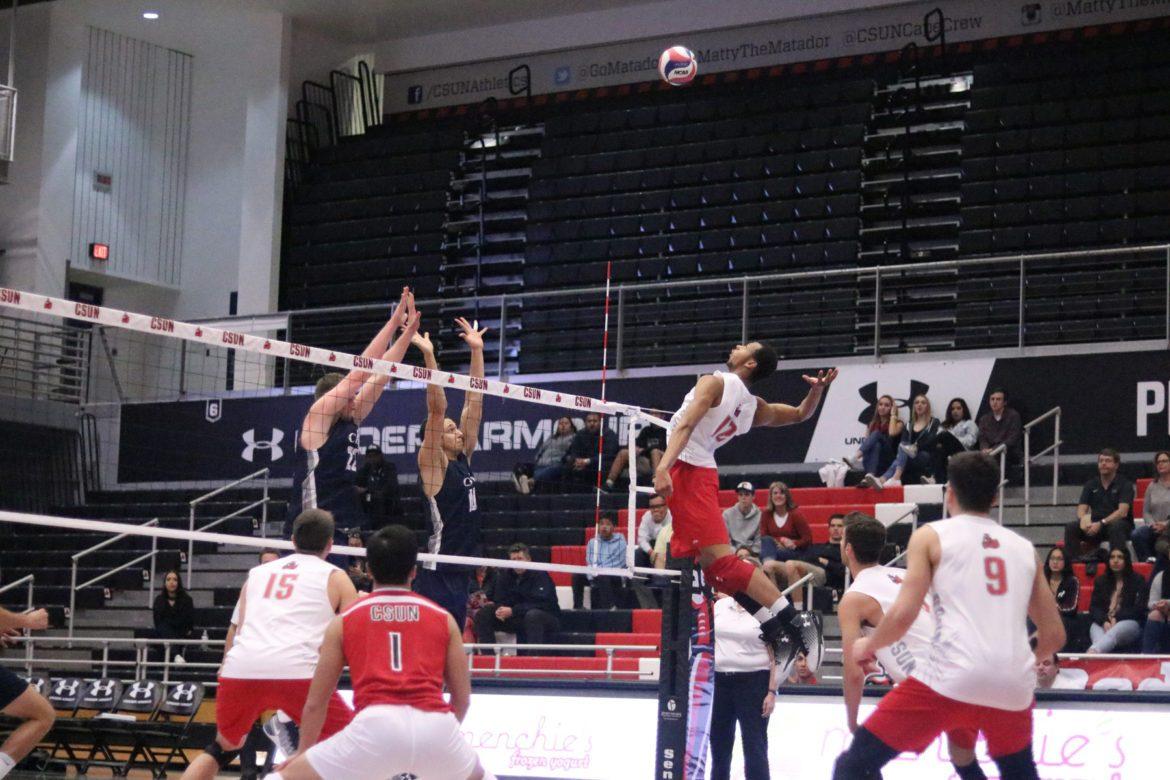 CSUN’s junior opposite hitter, Arvis Greene Jr., spikes the ball against a double block in the first set on Friday, Feb. 24, at the Matadome. Photo Credit: Lauren Valencia/The Sundial

Arvis Greene competed with and represented The United States in the World University Games in Taipei, Taiwan from Aug. 19 to Aug. 30.

Greene had an outstanding year in 2017 as he was named a part of the All-MPSF (Mountain Pacific Sports Federation) team, and even led the Matadors in kills in the 2016-17 season with 359.

As a result of his breakout season, Greene received an email from Stanford head coach John Kosty about playing for Team USA for the World University Games. Greene loved the experience of playing with some of the top USA players.

“That experience had been amazing. Talking with the national team head coach and learning from him, as well as getting to play next to the best players that USA has to offer has been a great learning experience,” Greene said.

Playing volleyball in a different country, let alone a different continent, can be intimidating for some, but Greene said has enjoyed his time in Taipei.

Greene also had the opportunity to share stories and learn from different players in the moments leading up to actually playing in the events themselves.

“When we first got to Taiwan, they handed all of us pins from our countries,” said Greene. “Players then went around and exchanged pins and talked to each other. We had a lot of interaction from different countries by just exchanging pins.”

The most important thing Greene said he took away from his experience was the fact that some of the players are good at what they do.

“It’s just amazing seeing all these top-notch athletes and seeing how dedicated they are. It’s really inspiring, and it’s making me want to become a better player. At this level everybody hustles every single play,” said Greene.

Jeff Campbell, men’s volleyball coach for CSUN, hopes Greene brings some of his newfound knowledge back to the college level.

“Once you start playing at a higher level and you come back to a lower level, like from International to collegiate, the game just slows down for you. So from the volleyball perspective, I anticipate his game being much better because of that experience,” Campbell said.

Greene’s teammate and friend Philip Barker said Greene is a leader to the CSUN team in more ways than one, and how he was not surprised Greene is playing at such a high level.

“He stays composed no matter what is happening. When he is not being a leader talking to the team, he is a leader when it comes to making a play in order to get us out of a really tough situation. He turns around the momentum in a good way all the time,” Barker said.

Greene is hopes his time with the international team is just beginning.

“My goal after CSUN is to play professional, keep playing for the United States and try to get a spot on the 2020 Olympic team,” said Greene. “That’s the ultimate goal right now.”

Campbell said it would not surprise him if Greene ends up on an Olympic team because of his capability to play at a higher level.

“2020 may be a little ambitious, but what he lacks in experience, he makes up in being athletically gifted,” Campbell said.