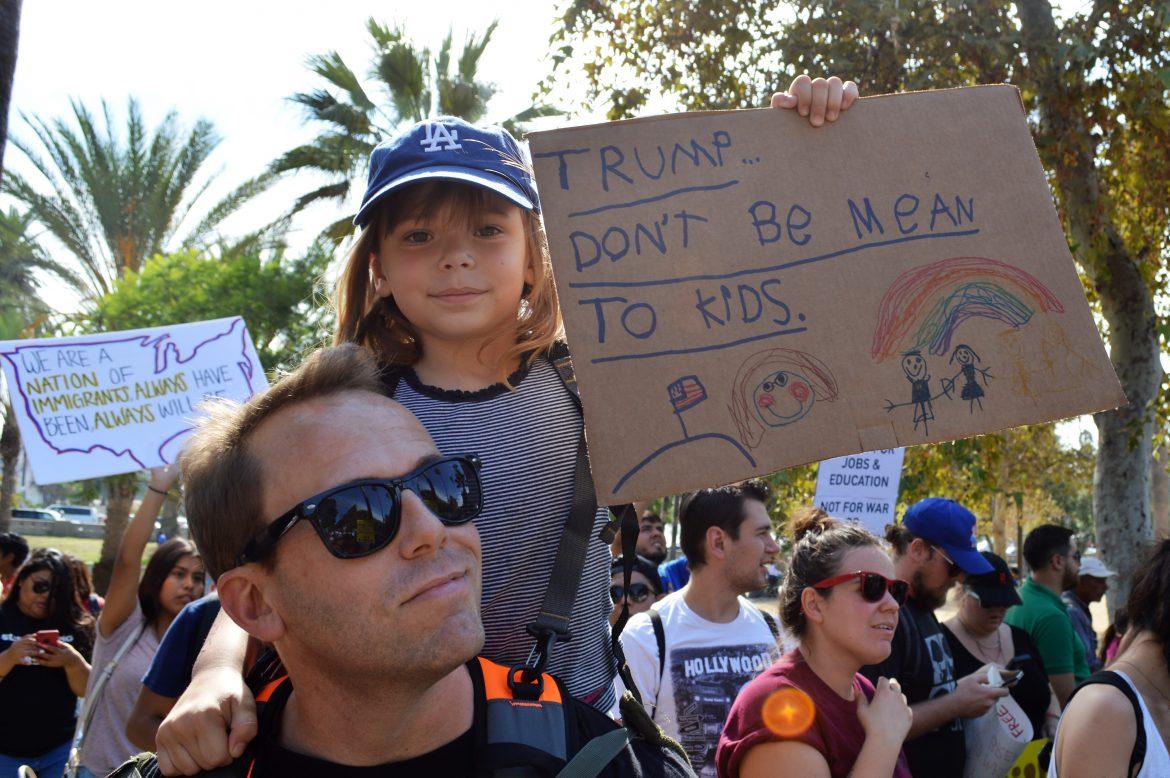 This little girl has her own message for President Trump. Photo credit: Makenna Sievertson

Thousands of protesters marched four miles through the streets of Los Angeles on Sunday to protest President Trump’s announcement to end the Deferred Action for Childhood Arrivals (DACA) program.

The march began in MacArthur Park at 3 p.m, moved through Echo Park Lake and ended at Olvera Street. Protesters equipped with handmade signs marched through traffic and forced the Los Angeles Police Department to close dozens of streets and freeway ramps. People of all ages and backgrounds came together in solidarity for the 800,000 DACA, or “Dreamers,” whose futures are now unclear.

“I was raised here, my friends are here to support me today. I pay my taxes, I pay immigration, I pay my school, and I don’t want to get help from the government. I’m helping out my community,” said Miguel Villa, a teenager protected under DACA. “I don’t know nowhere else, all my family is here. I don’t know where else to go.”

Counter protestors were present at MacArthur Park and were protected by police and volunteer organizers. A Latino Trump supporter got into a shouting match with a bystander over which side of the protest he should be on. The man immediately unveiled his pro-Trump banner and red white and blue bandana, proclaiming he is an American through and through. Police were quick to disperse any growing crowds around the Trump supporters, ushering marchers onto the designated routes.

As a sea of people moved through the streets, many cars were immobilized and forced to wait out the protest. Some drivers took the opportunity to honk wildly in support, while others showcased their own signs from the windows. Every honk was met with cheering, applause and even hi-fives.

“Our DACA recipients and immigrants as a whole deserve some liberty, some peace of mind. Both sides are here, and I think everybody should express their opinions and ideas. We’re here supporting our idea, which is to protect the future of this country,” said Luis Varela, a pro-DACA marcher.

Bystanders watched from freeway overpasses, passing buildings and apartment complexes. Marchers gave out extra signs, stopped to thank them for their support, and encouraged them to join in with the chanting. Echoes of “no no Trump has got to go,” “this is what Democracy looks like,” and various other mantras echoed for blocks.

Keynote speakers spoke to the crowd with megaphones, highlighting some of the injustices immigrants face and reminding everyone the protest doesn’t end there. A brief Mayan and Aztec ceremony was performed as a means of appreciation for the Native communities who came before. Incense filled the air, surrounding the diverse marchers with a sense of tranquility.

“A really good friend of ours was too scared to show up today, so it’s really important for us to come out here and prove he is not alone. It’s important for us as citizens, even though we’re not directly affected by it, to be out here representing that. It’s building a community,” said Brenda Garay, a protester holding a sign advocating for immigrant rights.

As the march came to an end near downtown Los Angeles, protesters were emotional and empowered. Strangers became friends in the crowd, united by the idea that DACA is something worth fighting for. The march was over, but not the struggle, as a speaker shouted “they will never ever kill the revolution of the people”.