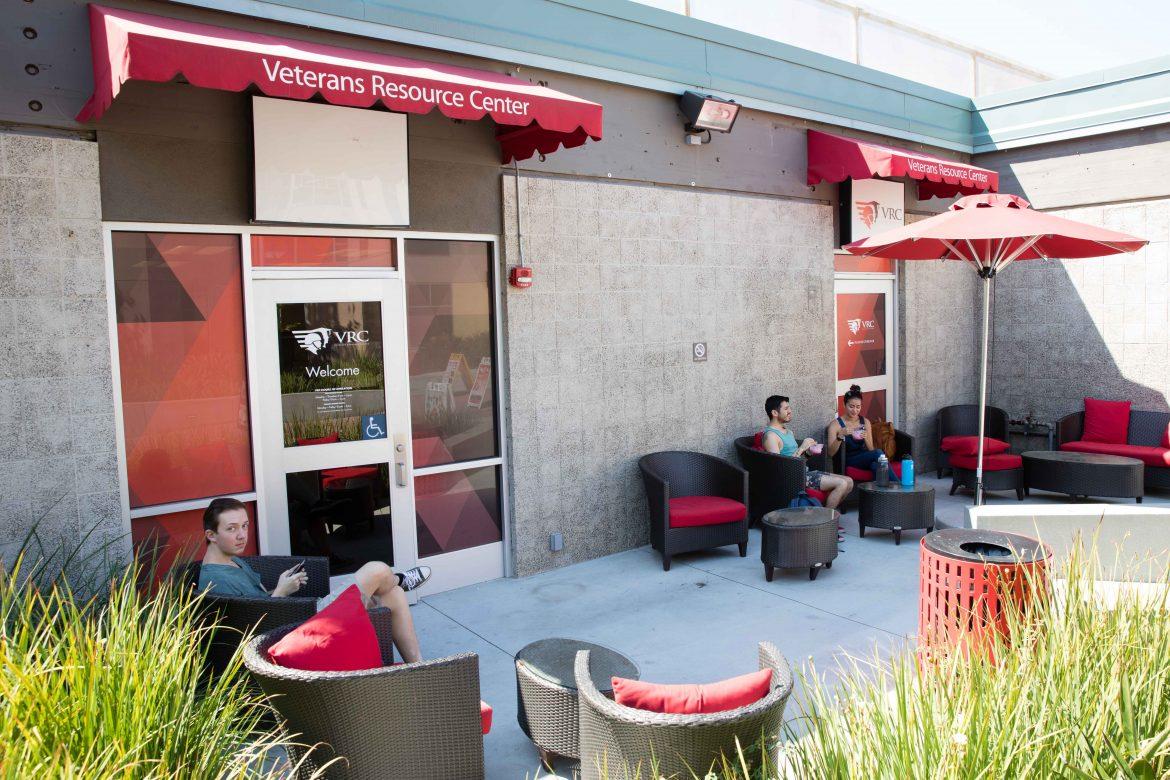 The Veterans Resources Center located in the Student Union offers veterans a place to study, watch movies and socialize with each other. Photo credit: Max Sullivan

The Veterans Resource Center (VRC), located in the University Student Union, serves to help CSUN students as they transition from the military to school. The VRC aims to facilitate that transition by hosting an event called The Blend.

The Blend provides students, both veterans and non-veterans, with light snacks and refreshments along with the opportunity to relax and have conversations with others. One of the main goals of the event is to provide needed support for veteran students.

“The Blend helps me a lot, it’s a big stress reliever” said Rolando Cabral, a veteran of the U.S. Marines and math major. “Coming here helps me power through the rest of the week and it helps the transition between work and school. This place is a second home to me. There are certain ways to speak with veterans that would seem too abrasive with others but here we connect with them.”

According to VRC event assistant and Army Reserves veteran, Thomas Kee, The Blend offers a sense of belonging to veteran students and finds common ground with other veterans they can relate to. Veteran students find difficulty in relating to traditional students and The Blend allows them to connect with others who have the same life experiences as them and people who have been through the same things they have.

The Blend has been adapted over the years and was originally known as Meet, Relax and Eat (MRE), according to Veterans Resource Center supervisor Amber Bartmus. The idea for creating MRE and The Blend was a collaboration effort with the USU, but Bartmus said the creation of the event is credited to Patrina Croisdale, Coordinator of the VRC.

The name for MRE came from the food packets that service members eat called Meal, Ready-to-Eat. Despite the different name, MRE had the same intentions as The Blend by providing community, brotherhood, and a sense of belonging to veteran students.

“It still meant the same thing as the Blend because it brings a personal component, making it so people had a place to come together and discuss what they wanted to discuss in a comfortable way,” Bartmus said. “The reason we changed it is because in changing the name of the program we were hoping to also explain how we want to blend our student veterans with our military connected and our [military] allies.”

The Blend also offers activities and other forms of entertainment that are different each week, but still retain something that veteran students can relate and connect to. According to Kee, the theme could be watching a documentary and discussing it to arts and crafts activities. Some of the artwork seen around the center came from The Blend. The most recent activity was making military bracelets made of 550 paracords.

“In the military, the paracords are used to tie something down without a big rope,” said Cristian Giron, a veteran of the U.S. Marines and electrical engineering major. “When we got bored we made bracelets out of them and the trend carried on. Every veteran is different but with these bracelets, we have one thing in common.”