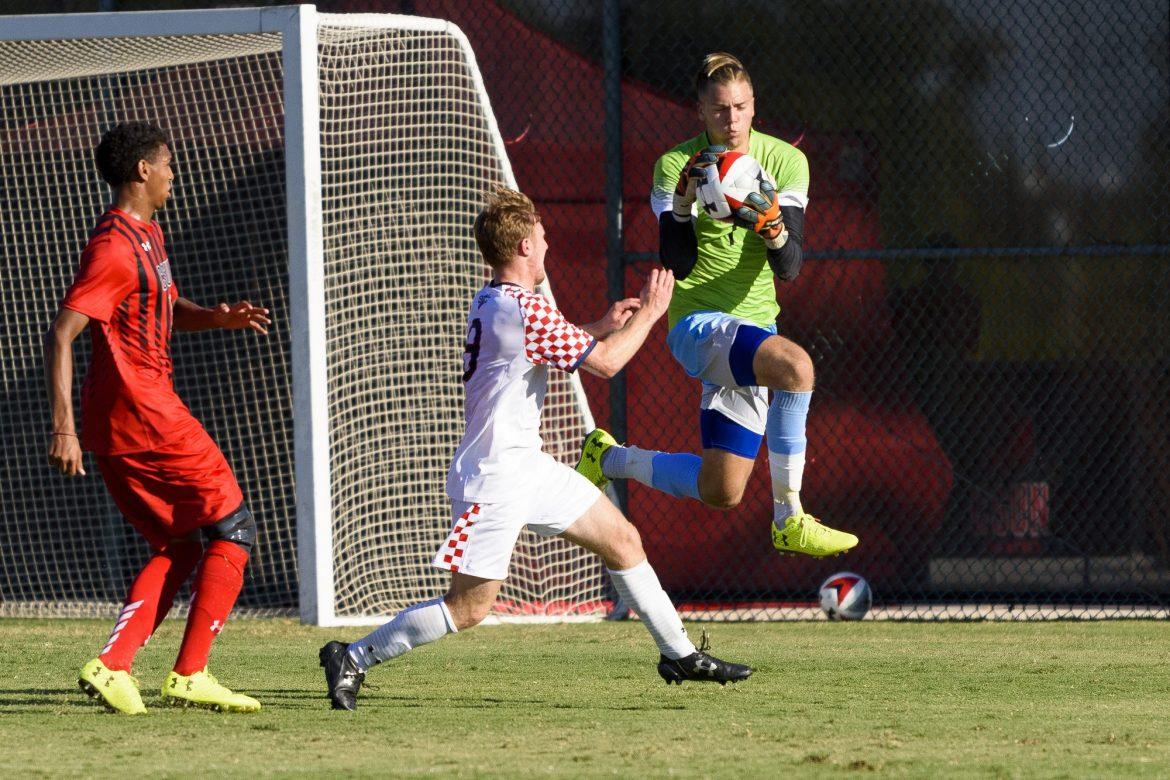 Henrik Regitnig has been a key force on the defensive end as the Matadors have defeated two ranked teams in a matter of a week and a half. Photo Credit: GoMatadors

Matadors of the week: goalkeeper Henrik Regitnig- Regitnig was named Big West Defensive Player of the week for the second consecutive time after posting a season-high six saves in CSUN’s 2-0 road victory over No. 9 ranked Denver.

“It’s a good accolade for showing out for that kind of stuff,” Regitnig said after defending his Big West Defensive title. “But at the end of the day it’s about keeping my team in the game for as long as I can. It’s nice, but I don’t put my mind too much to that. I stay in, keep grinding and that’s what I’m all about.

Regitnig faced strong opposition from Denver who outshot the Matadors 19-10. Despite the pressure, the senior from Canada was able to withstand each attack.

“Denver had a lot of firepower in the first half and I would say that they had four of their chances in the first half,” Regitnig said. “A couple of good chances but my defense in front of me was able to block shots so they couldn’t get a clean look. At the end of the day Denver got a lot of good looks but I owe it a lot to the defense for pushing it away. I maybe had one, one versus one save.”

CSUN now comes back home to play San Jose State on Thursday after winning two of three games on the road . The Matadors lost its only match at home this season 2-1 against Saint Mary’s but Regitnig feels the results will be different this time.

“I owe it a lot to the team,” Regitnig said. “We were able to bring it together and get bought in. We took the first loss at home early on in the season. That’s not necessarily in our heads but at the end of the day we can’t take another ‘L’ at home. I think that will really push ourselves at home and not take anything for granted.”

Forward- Emmanuel Usen Jr.- Usen scored both goals in a 2-0 win over Denver and the Matadors have won two consecutive games against ranked teams during its three game road trip.

“I thought we had a good performance this weekend,” Usen said. “I just happened to get the two goals on the score sheet and it’s just a testament to how hard we have been working.”

CSUN will play San Jose State (2-2) Thursday at home before heading back on the road for five games that will include stops at UCLA and San Diego. Usen will look to avenge the home field after an early season loss to Saint Mary’s.

“Coach (Terry Davila) talks a lot about resiliency and I would like to say down the road these hard games are going to pay off down the road especially during playoffs,” Usen said. “It’s never good to lose in general, but especially at home. But that was our second game of the season and since then we have grown a lot. We are definitely hungry to give the fans what they want, have a good outing and win the rest of our home games.”