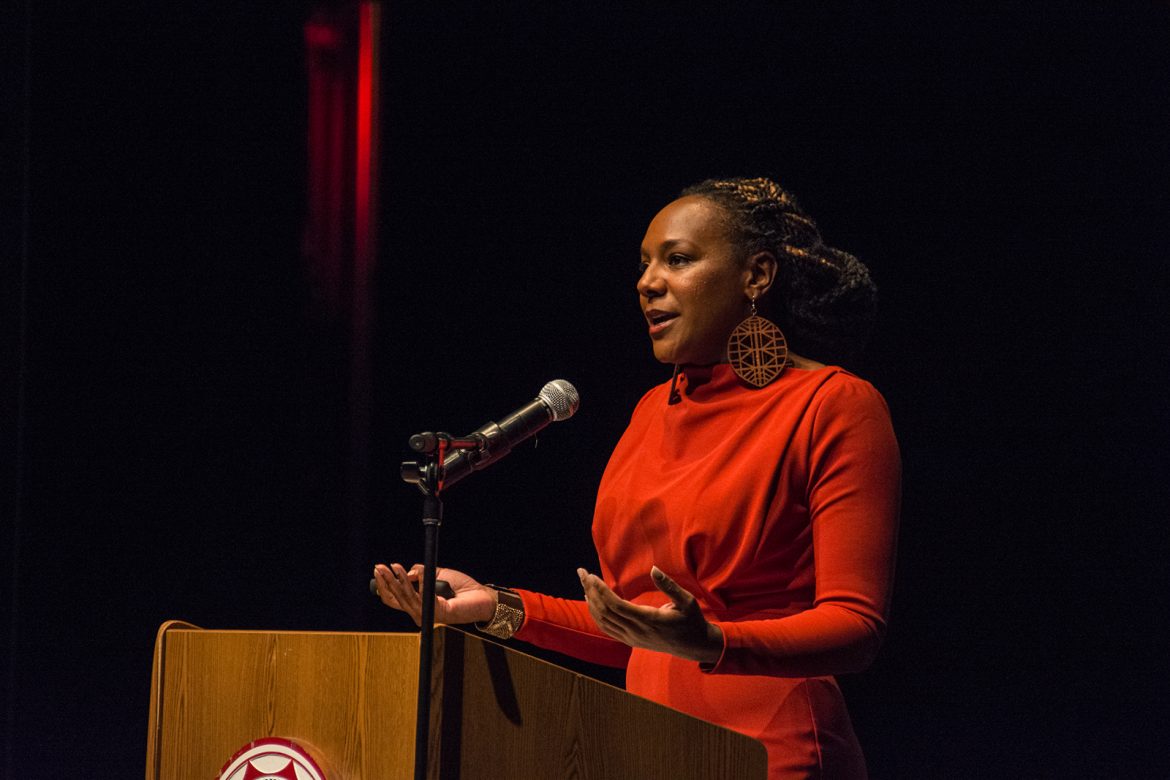 Bree Newsome Speaking to students about her actions in removing the confederate flag and reasons why she did it at CSUN Performance Hall. Photo credit: Alejandro Aranda

This was the opening demonstration Bree Newsome, freshman convocation keynote speaker and activist, who asked the audience to participate in during her talk in the Plaza Del Sol on Thursday, Sept. 15.

Breathing is an action the body does constantly without being aware of it. In the moment when the entire audience took deep breaths, they became aware of what they had been doing all along.

This demonstrated the idea of being “woke” according to Newsome, becoming aware of what we have been doing all along; becoming conscious.

Newsome is best known for removing a Confederate flag from a pole in front of the South Carolina state house in 2015, an act which got her arrested, after Dylan Roof massacred nine African-Americans during a church prayer service.

“The United States and South Carolina flags were lowered to half-staff, yet the Confederate flag remained high and fully unfurled, even as Clementa Pinckney’s casket was [walked] through the streets of Columbia, South Carolina,” Newsome said. “As photos surfaced of Dylan Roof burning the American flag while waving the Confederate flag, there was a renewed sense of outrage over the state’s continuous endorsement of this hate symbol.”

Removing the flag was a symbolic action that challenged old ideas of oppression and replacing it with a new symbol of liberation, according to Newsome.

“The fact that she had the bravery to take down the Confederate flag… she’s a hero for that,” senior Shaq Clark said. “Trump’s slogan is ‘Make America Great Again’ but America was never great for people of color.”

Though Newsome’s removal of the Confederate flag is seen as heroic, it is also met with opposition.

That opposition was seen on campus in front of the Oviatt library when members of The California Freedom Project expressed their dissatisfaction with Newsome as CSUN’s keynote speaker for freshman convocation.

“This speaker is talking about how brave it is to remove statutes and how that’s erasing racism, we’re trying to give her a counterbalance to that view,” founder of the California Freedom Project, Deepak Sahani said. “You’re going to burn books and you’re going to try to remove all the history and culture of America [but] it doesn’t mean you’re going to solve racism.”

The group was eventually police-escorted off of campus after they drew a crowd of over 50 students who oppose their movement.

While some were dissatisfied with Newsome as the keynote speaker, many were pleased.

“In my graduate program I’m taking the social justice and diversity class where I’m immersed in qualitative research so I’m learning anti-oppressive strategies,” Sociology grad student Victoria Loy said. “To hear her bring it full circle about oppression and how this entire country was founded on oppression…it was really powerful.”

Newsome urged the audience to recognize that the flag is just a symbol of oppression and not the oppression itself, that racism is not just about skin color but a system of injustice, and to work to shift from a state of unconsciousness to consciousness.

So, what does it mean to be conscious according to Newsome?

“It means to be aware of what a fantastic blessing it is to be alive in this moment, to be a human being, to have the power to create and shape the world where there is no violence or oppression…” Newsome said. “This is a generation of awakening, one that will and already has in many ways, changed the world.”