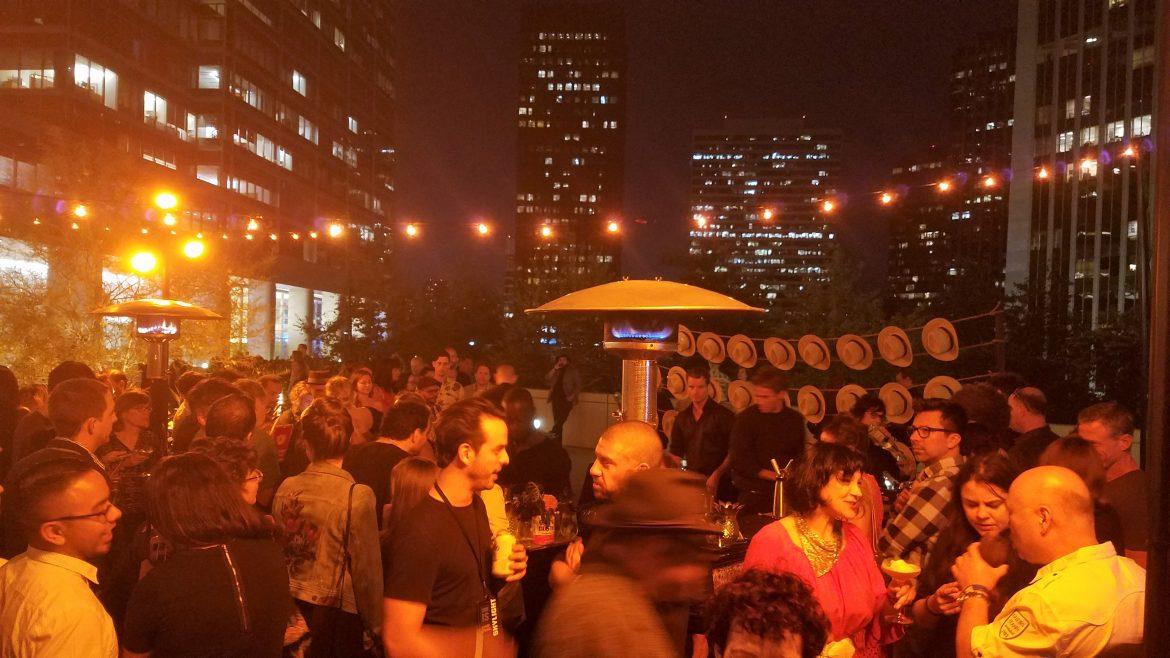 One of the outdoor pop-up bars Photo credit: Christine Martinez

Preconceived assumptions of Cuba are taboo and seeped in stereotypical notions of a country detached of outside influence. Time-stamped in the revolution of the 1950s and 60s, the thawing of U.S.-Cuba relations are rapidly underway as this previously isolated country is slowly starting to lift embargoes and allow tourists to leisurely travel within its forgone cities.

The Annenberg Space for Photography in Century City is hosting an exhibit titled Cuba Is that displays this radical change within Cuba through the lenses of artists who seek to dive deeper beyond what people tend to generalize about Cuba. Beyond myths into Cuba’s current reality, these series of photographs show unrecognized faces that comprise a country that outsiders seldom get to see.

The opening reception took place on Friday, Sept. 8 and was dedicated in every way to the culture its main attraction was focused on.

Upon entering into the courtyard, a live band played music under stringed yellow lights as attendees roamed back and forth between the stage and a line that quickly formed to enter the actual gallery itself. Little tastes of Cuba, like plantain chips and mini Cuban sandwiches, presented themselves on silver platters, graciously handed to guests by wait staff. Pop-up bars stood on either ends of the courtyards with flower and fountain arrangements scattered about, perfect for photo-ops.

Treasures depicting life in Cuba not normally seen or known lined the walls of the gallery. A short film looped in one of the corridors of the gallery that further explored five of the photographers and their subjects.

“I just want to jump through the screen and be there,” guest Firouzeh said. “I love Latin America. I’m Iranian so I feel a sense of comradery with Cubans, you know, with all the embargoes and government oppression.”

It is sometimes easy to forget how art, music and dance can prosper even in a repressive regime. In fact, the opposite is true of Cuba. Even in the early days of the Revolution, the government made it a point to stress the support of the arts and a thriving cultural and arts scene came about as a result.

Tria Giovan has traveled to Cuba numerous times and has shot thousands and thousands of photos of it. For this exhibit, she gave life to her photos by filming her interactions with her interviewees, giving voice and motion to their otherwise still frames.

Tropicana dancer, Joana Gliz Càrcel, is featured in full costume and viewers catch a glimpse of her rehearsal in an old, former jail with the rest of her troupe.

A notorious communist country wouldn’t necessarily usher first thoughts of an upper class but there inevitably always is. The generation that comes from past revolutionaries, for instance, are now living a life of the 1 percent.

Che Guevara’s son, Camilo, and Fidel Castro’s son, Alejandro, are captured by Dweck as opposed to Brown who followed alienated youth and their daily lives roaming the streets or getting high.

While much of this exhibit focuses on rare images of a country not relatively distinguished by, there were also some photos that mimicked the classic Cuban aesthetic.

Eduardo and Orlando Garcia are twin brothers that are native to Cuba and portray a vibrant street life that emits a heavy Cuban essence.

The Cuban Revolution sparks many iconic portrayals of Cuba that people still associate with the country long after it has passed. Elliott Erwitt has been photographing Cuba since those days and has many iconic black-and-white photos of revolutionaries as well as inhabitants around the countryside.

As the night begins to wind and the last of the rum infused drinks are drunk, I notice a side room called Doña Dulce. Miniature pastries are spread out, each arranged for patrons to take at their own pleasure. “The chocolate pastries are the best ones!” someone yelled as someone else turned around and handed me one. Cuban coffee was offered in accompaniment and it almost felt like a typical ending to a Latino family gathering and for a lot of the Cuban guest in attendance, it pretty much was.