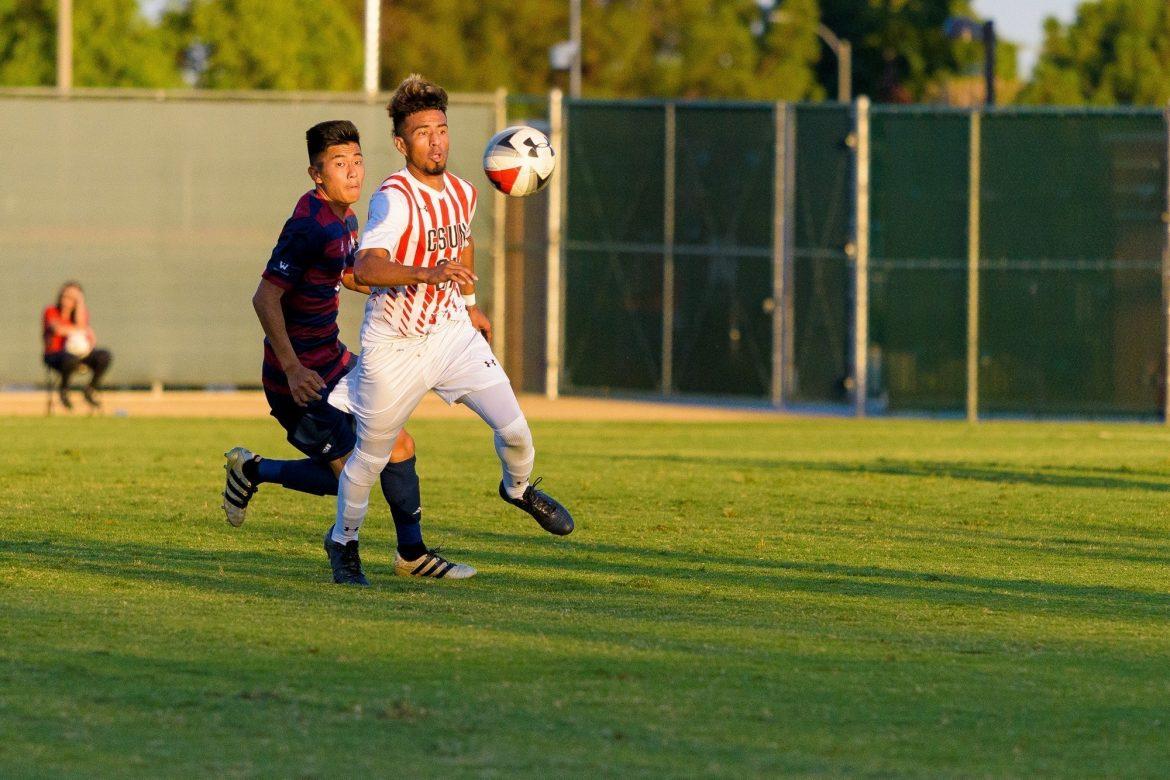 Danny Trejo will look to keep the momentum going on the road against New Mexico on Sept. 8th. Photo Credit: GoMatadors

The CSUN’s mens soccer team dominated Grand Canyon University 4-2, and improved to 5-2 overall. They also have won their past three games convincingly.

If you looked at the box score, you’d think both teams were evenly matched. The Matadors and GCU both attempted 12 shots, and each team’s goalie had three saves. GCU had the advantage in corner kicks 5-3 and CSUN committed 22 fouls compared to 11 by GCU.

Both teams had an identical strategy to start the match, pushing the tempo on offense leaving their defense a little more vulnerable. As a result, Grand Canyon’s Aidan McGlothan scored his second goal of the season in the third minute.

In a throw-in from the left corner in the fifth minute, Jumoke Hutton was able to place the ball perfectly for Emmanuel Usen Jr. to head it past GCU’s goalie for his fifth goal of the season.

Both teams were locked in defensively in the first half until GCU fell asleep for a split second and Usen Jr. took advantage of the opportunity with a shot on goal, but hit the post in the 24th minute.

GCU looked to capitalize on a free kick after a yellow card by CSUN’s Nicholas Grinde, but was shot high by Andy Alanis.

After a goal kick, the Matadors advanced the ball, and on a beautiful assist down the side of the field by Jordan Kinoshi. Grinde scored his first goal of the season into the lower left corner in the 44th minute to give CSUN a 2-1 lead going into the half.

In the third minute of the second half this time, GCU scored a quick goal by Musa Morris-Demos off a cross to tie the game up 2-2.

On a breakaway attempt by Daniel Trejo in the 55th minute, GCU’s Jordan Slack clipped him with a slide tackle earning him a red card and a one-player advantage for the Matadors.

CSUN slowly was able to attack and benefit from having an extra player, and of GCU’s fatigue. The Matadors took three shots in the span of two minutes, but weren’t able to capitalize on any of those attempts.

Being aggressive and patient paid off for the Matadors as Papi Diouf scored a tap-in goal in the 82nd minute by a low cross and assist by Usen Jr.

The Matadors continued to push the tempo to assure there was no comeback for GCU. In the 85th minute, Trejo scored his third goal of the season off a left corner chip in over GCU’s goalie which sealed the deal.

The Matadors look to extend their impressive streak against San Diego on Sept. 21.