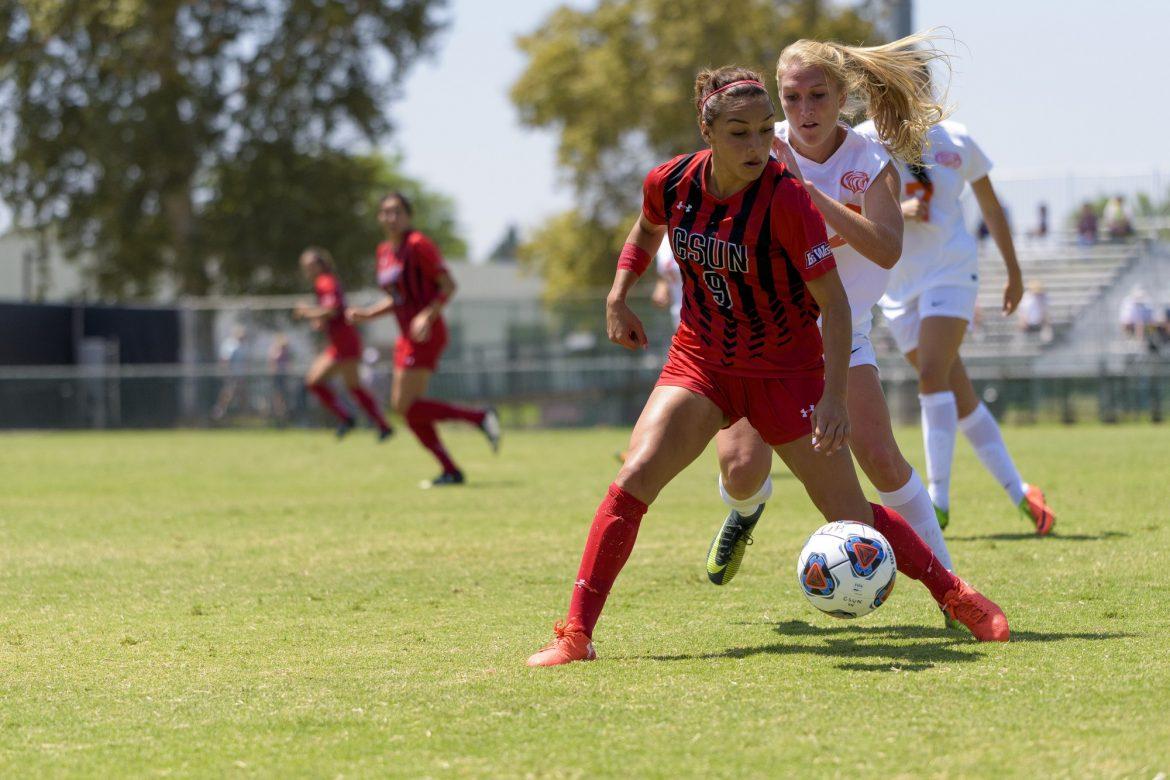 The morning sunshine hits Cynthia Sanchez like orange stripes. She races onto the field with the same zest and joy she has had since she was a freshman. Her detailed approach in practice is a reason why CSUN values her leadership for a journey that started with many obstacles.

Now with 10 games left in her college career, Sanchez has 19 career goals and needs only four more to cement her name in history as the Matadors all-time scoring leader.

“Honestly the record is kind of the last thing on my mind right now,” Sanchez said, whose stoic demeanor has become a trademark in the way she carries herself both on and off the field. “I just want to have enough goals to win games and I just want to do everything for the team. If that means giving other people chances and making a pass to give someone else a goal, then that’s what I need to do.”

Prior to coming to CSUN, opportunities didn’t come easy for Sanchez. She was born and raised in the town of Gilroy, Calif. located 80 miles southeast of San Francisco. It is a city that has a population of under 50,000 and is known for its garlic festival that draws thousands of tourists from around the world.

But other than the occasional pungent stench, sometimes an athlete of Sanchez’s caliber can go unnoticed.

“Coming from a small town there wasn’t a lot of soccer academies, I came from a very low division,” Sanchez said. “I really didn’t have a big coaching experience. Literally everything I probably learned, up until the age of 12 came from this big club team I played for in San Jose, but once I entered my high school, I stopped progressing and learning as a player.”

Sanchez was dealt a major blow in her senior season of high school when she discovered she tore her ACL. The few schools that did have interest in her had doubts about whether playing college soccer was a possibility for her.

The school that remained fully committed was CSUN. Coach Keith West, who has a reputation for taking previously injured players and bringing them back to prominence, saw an investment in Sanchez.

“This program believes in people and I knew when I recruited her for the first time in her junior year before she tore her ACL that she was an impactful player,” West said. “We knew we wanted her and when her dad called I told him that we would love to have her. I was honored that they chose to come to us. We wanted her from the start regardless of her ACL injury whether she got hurt or didn’t get hurt. Injuries are apart of life and we just work through them.”

In spite of the lack of experience compounded with a severe injury to rehab from, Sanchez’s spirit was tested, but never broken. After getting a medical redshirt, Sanchez started in 14 of 20 matches while adding a respectable three goals and an assist.

Sanchez’s season set the all-time Matadors record for goals in a season with 11 and earned First Team Big West honors. Now in her senior season, Sanchez feels she can elevate her game to an even higher level.

“I feel like I can go past that point,” Sanchez said. “Because I know if I do, then my team will be better for it.”

The only person who remains in her way of history is Farryn Towny who last played for CSUN in 2010. Towny in many ways walked the same path that Sanchez did.

She wasn’t highly recruited out of high school and like Sanchez suffered a major injury during her career. Towny’s injury was a stress fracture in her shin that forced her to sit out her sophomore season after playing in only four games.

“When my injury happened it happened so fast and it was just before the season was about to start,” Towny said. “After the injury it was devastating. Every game, every practice you’re trying to earn your spot. So after the injury I felt like I was taking a step back. It took awhile to make me believe in myself and to tell myself I was a good player.”

Her career took off soon after and she finished with 22 goals, half of which were game winners.

Sanchez will now try to perform with a same level of consistency and attempt to chase down a record that has stood for the past seven years. Towny admits that having the record has always been an honor but hopes that Sanchez will climb to the top of the board.

As fate would have it, Sanchez wears no. 9, and so does Towny.

“My only advice for Cynthia is to listen to your coach,” Towny said. “He knows a lot more than you think. Also remember to enjoy it. This soccer season is going to be over very quickly and enjoy every minute of it. Have fun with your teammates and have fun with the season. It goes by so quickly and you’ll never get this time back. Just give it your all.”

It’s been a long road for Sanchez, not just for the miles accumulated in her career, but in her development as a player and a person.

“For me breaking that record would make all the struggle I went through worth it,” Sanchez said.