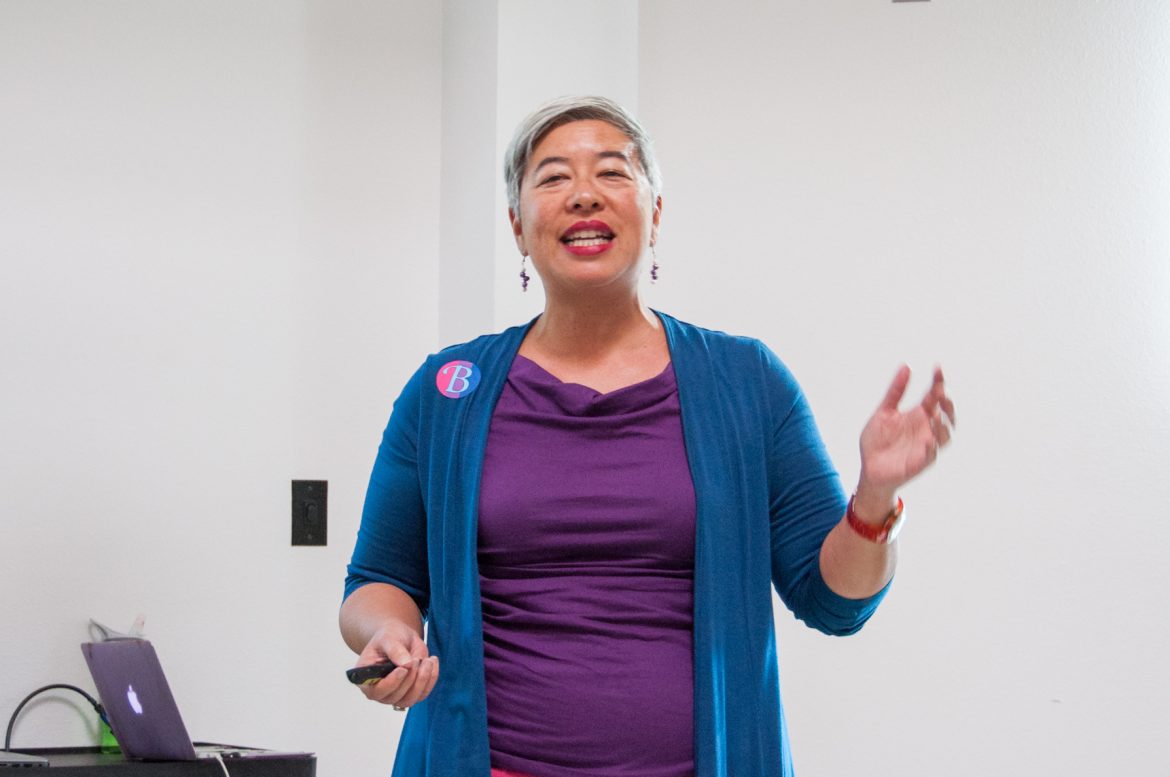 “I try to take this opportunity because I recognize how little awareness there is around bisexuality and how important that is.” Dr. Tania Israel said. Photo credit: Alejandro Aranda

In celebration of Bisexuality Awareness Week, the Pride Center hosted Dr. Tania Israel, to serve as a keynote speaker for the Beyond the Binary annual event at Flintridge Room, USU last Tuesday, Sept. 19.

Dr. Israel, a social justice activist, UCSB professor and LGBTQ researcher, debunked some of the myths surrounding bisexuality and spoke about the challenges that they are facing today.

The bisexual community represents a significant number of the US population. According to a recent National Health Statistics Report, 5.5% of women and 2% of men said they were bisexual.

“There are more bisexuals than gays and lesbians put together,” she said. “They represent more than half of the LGBTQ community.”

She said she has been identifying as bisexual for 25 years and that bisexuality is a radical concept because it challenges the notion of gender. “Bisexuality is to be celebrated,” she said.

She said there are many ways to be bisexual and it wasn’t limited to a binary gender. There are many variables that affect bisexuality based on sexual behavior, attraction fantasies lifestyles.

She also said some of the challenges facing the bisexual community is that bisexuals tend to be invisible and people don’t embrace their bisexual identity because of people’s assumptions on sexual orientation.

“I think visibility is really important and that can be challenging for bisexual people so think that people need to create a context in which bisexual people feel comfortable coming out and comfortable exploring their identities that they want to use,” she said.

Dr. Israel also encouraged students to help to decrease the stereotypes on bisexuals. “I want people to know about these things I think that’s really helpful because if we are relying only on the bisexual people to do it it’s going to be a lot harder so I think allyship is a valuable thing to cultivate,” she said

Many CSUN students showed their support to the event.

“I decided to come because I wanted to be more aware of bisexuality and how to impact me and others around me,” said Photo Journalism major Sarah Dutton. “I think we should continue having events like this as well as really kind of push the social stereotypes on what bisexuality actually is.”

Others attended to show solidarity with the LGBTQ community. English Creative Writing major Santiago Aguirre said he wanted to support his bisexual and gay friends. “I support them I feel proud to have them as friends because they are really good people and they are not how people describe them,” he said. “We should continue having events like this and show people how much fun they can be and they are not different from us; they just have different taste.”

Dr. Israel thanked the pride for giving her the opportunity to spread awareness, “I try to take this opportunity because I recognize how little awareness there is around bisexuality and how important that is.”