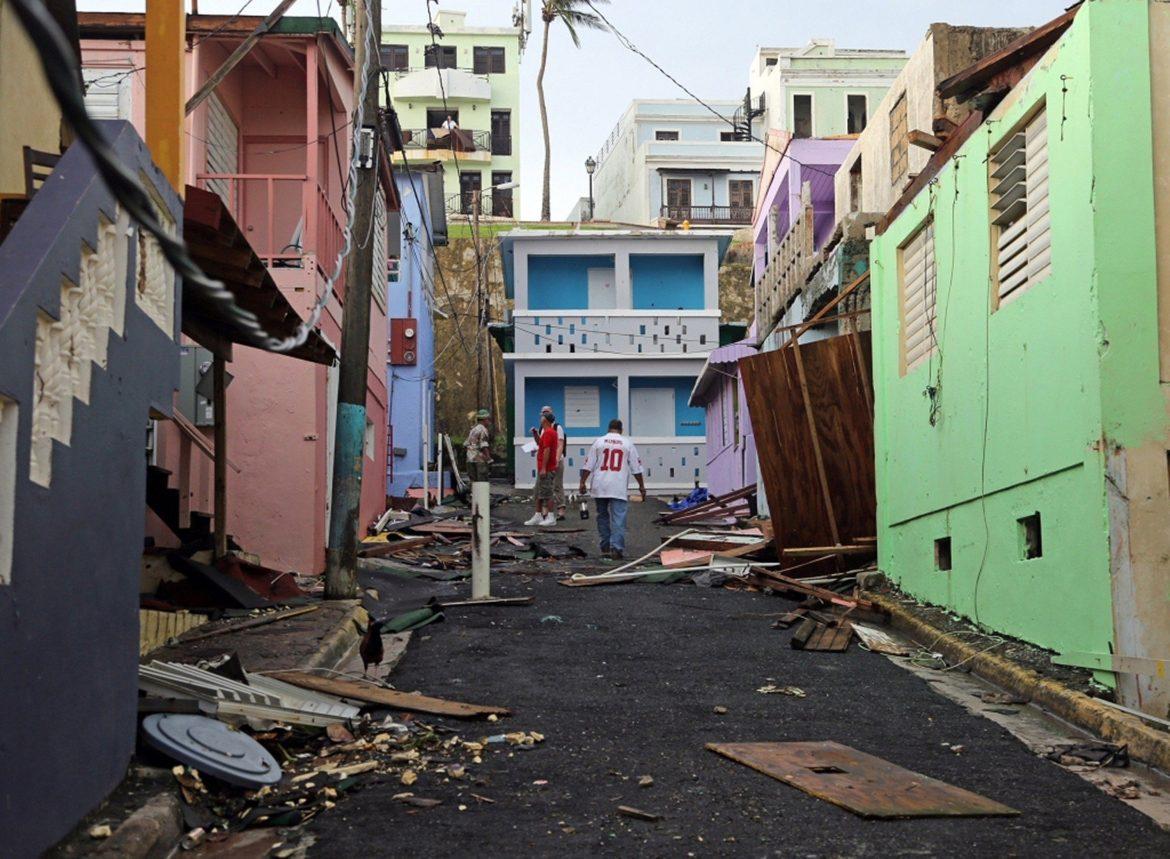 A man walks near colorful damaged buildings. Residents of San Juan's "La Perla" neighborhood have taken hurricane recovery into their own hands as they start the hard task of clean-up because of fear of being forgotten by the government. Hurricane Maria has left many of San Juan's streets flooded and blocked by fallen power lines, trees, and debris as Puerto Rico tries to recover from the Category 4 storm on Friday, Sept. 22, 2017. (Carl Juste/Miami Herald/TNS)

The Tropical Atlantic has not given the US a break since Hurricane Harvey slammed Texas with a Category 4 landfall and over 50 inches of rain in late August. A mere two weeks later, Hurricane Irma exploded into a 185 MPH Category 5 that left behind complete destruction in the Caribbean, and ended by raking the whole Florida Peninsula at much lower intensity. Now, we have a third catastrophic hurricane: Maria.

It hit Dominica at Category 5 intensity, leveling the island, including the official residence of the Prime Minister, who had to be rescued from the flooded building. It then intensified further into a 175 MPH Category 5 hurricane that made an eye wall direct hit on the already-damaged St. Croix in the US Virgin Islands, destroying even more.

However, Maria’s most catastrophic hit was to Puerto Rico. Unlike Texas and Florida, states with powerful representation in Congress and the Electoral College, Puerto Rico has none; it is a territory despite having 3.5 million people living on the island. As a direct result, it gets scraps and crumbs of the federal government’s revenues regardless of who is in charge of Congress and the Presidency, and is plagued with corruption and crumbling infrastructure low even by US standards. The territory basically declared bankruptcy in May and, adding insult to injury, Hurricane Irma’s swipe of Puerto Rico already did major infrastructure damage to the island, knocking out power to two thirds of the island, and compromising the structural integrity of numinous buildings even before Maria hit.

Now, Maria has made landfall as a borderline Category 4/5 storm on a crippled Puerto Rico, and raked the whole island with sustained hurricane force winds. The damage was so catastrophic to Puerto Rico that it could be accurate to say pre-Maria and post-Maria in reference to Puerto Rican history.

The island suffered a complete power outage, obliterated entire neighborhoods and villages and caused massive flooding that will likely trigger major mudslides. Officials have said that “People will have to adjust to a new way of life,” and that it will take months to restore power.

However, months may be a serious understatement with territorial status and major budget cuts under Trump. While the states will be hugely affected under the proposed cuts, Puerto Rico and the other US territories are going to bear the full brunt of these cuts with no representation, getting funding scraps by default. We have a true humanitarian catastrophe in Puerto Rico, and almost no one cares about it due to its territorial status. Hurricane Maria has reduced Puerto Rico to Third World status, and arrogant neglect by the US feels criminal now. Trump’s budget cuts will continue these decades of arrogant neglect and, unlike Texas and Florida, the reaction from the general public will probably be apathetic due to Puerto Rico’s lack of representation.

Make no mistake, this will certainly scar the Trump administration due to how complete the damage is in Puerto Rico. However, even though Maria hit far more catastrophically, it will not be as scarring as Irma and, especially, Harvey due to the island’s territorial status. Only time will tell if this complete destruction of Puerto Rico will finally force Americans to wake up to their decades of neglect that led to a Third World territory on their own soil. Trump’s budget cuts will make for a powerful double whammy, and we may even have a triple whammy should Obamacare be repealed.