Banned Books Week: Books are challenged for having LGBT content 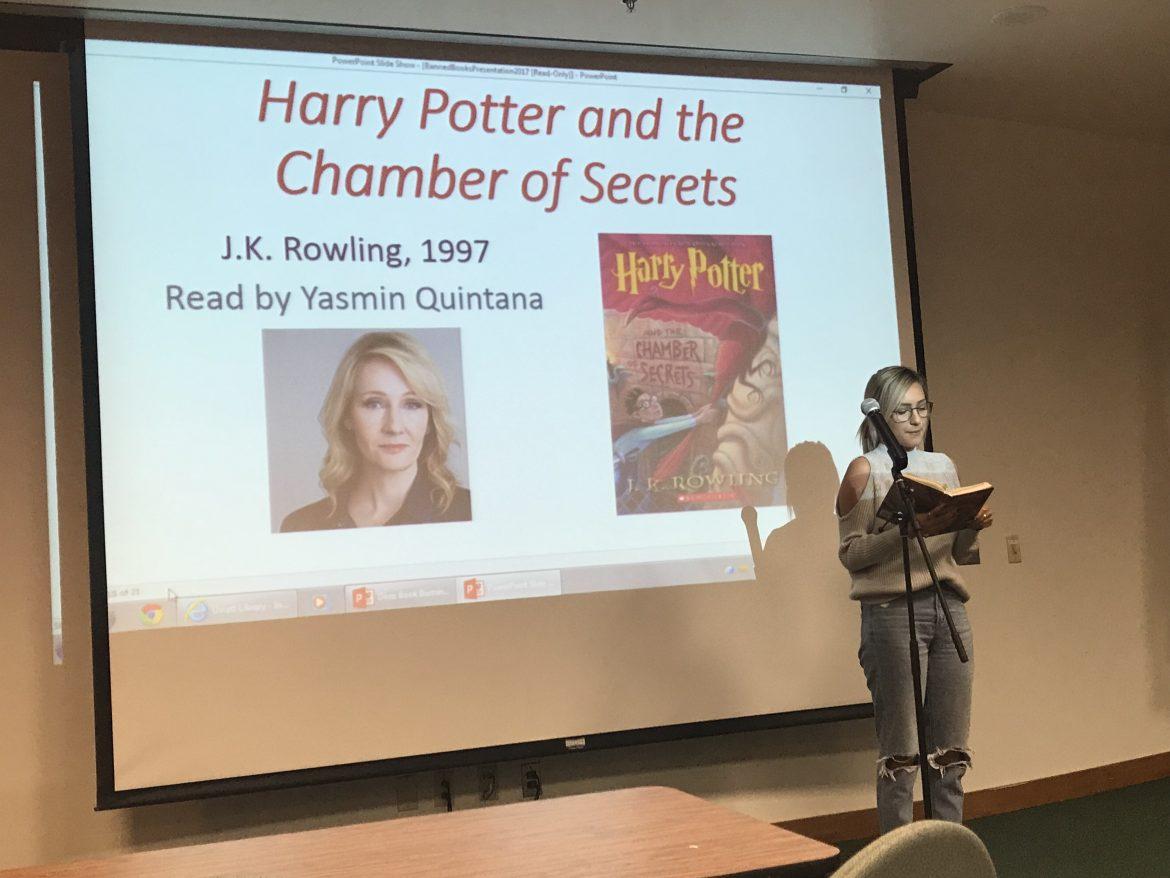 Yasmin Quintana reads an excerpt from Harry Potter and the Chamber of Secrets.

The fear of “the other” and the question of can there be a digital ban was the central discussion for the 5th Annual Banned Books Readout at The Oviatt Library.

“George,” is a book for elementary kids about a boy who is transgender, thinks of herself as Melissa and wants to get the role of Charlotte in Charlotte’s Web play. “George” made it to the top 10 most challenged book list for 2016, one reason being that it included a transgender child.

The discussion of the digital age ban and the fear of “the other” were the central themes for the 5th Annual Banned Books Readout. Special guest Alex Gino, author of “George,” was also in attendance.

When referring to “the other,” it means anything that is different from what is perceived to be normal. The readout addressed the issue of “the other” and why this fear of them can lead to hate and then marginalization, which in turn, is why these books are banned.

Gino discussed why the top five banned books deal with LGBTQ related themes, and about the fear of one becoming the other.

Mark Stover, library dean, presented this idea and goes on to talk about his thoughts of why the top five banned books of 2016, each dealt with the theme of LGBTQ.

“Everyone seems frightened by members of this community, they deal with the fear by banning these from bookstores and digital online content,” Stover said.

Elizabeth Blakey, journalism professor and the keynote speaker for the event, discussed the question of whether or not book censorship happen in the digital age.

Not too long ago, there were book burnings of titles including “Harry Potter,” “The Book of Mormons,” and the Bible. Digital burning isn’t possible, but text flows into digital, so the symbolism of burning books is still as meaningful.

“The symbolism [of burning books] is very meaningful,” Blakey said. “It has to do with things being cut off from the freedom of expression.”

Blakey goes on to talk about the censorship received on the Internet with Facebook, and YouTube that will put down content and take away our freedom of expression.

Pranita Koirala, accounting major, believes education should not be limited.

“Our freedom of speech is so important because our education is not limited,” Koirala said. “People will learn what they want to learn.”

Along with a short reading of “George,” various CSUN students stood up and read excerpts from various banned books. Everything from “Harry Potter” and “The Great Gatsby,” to “Little Bill: The Meanest Thing To Say and The Catcher in the Rye.”

Stover said this event is a protest against this fear and ban and to take charge and have the power to act against it.

“In our celebration of banned books week, what we are really celebrating is that as residents of this country, we have the right to, read them, write them and purchase them,” Stover said. “We stand up and read an excerpt. It’s an act of protest and an act of solidarity with the authors.”

Ruby, third year journalism major, said that censorship if unnecessary and our freedom of speech is the way to make a change.

“There is no reason for a book to be censored,” Ruby said. “Freedom of speech is really all we have, especially with everything going on in today’s world, how are people supposed to make a movement or change without freedom of speech.”

Gino’s book will be an opportunity for children to be aware of transgender and not have this fear of the other. Gino doesn’t agree with this fear and says it is dangerous to be.

“Where does notion come from that reading about LGTBQ people is dangerous,” Gino said. “It’s only dangerous if you fear us if you fear your children will become us if they read about us.”