CSUN may not be affected by Title IX decision 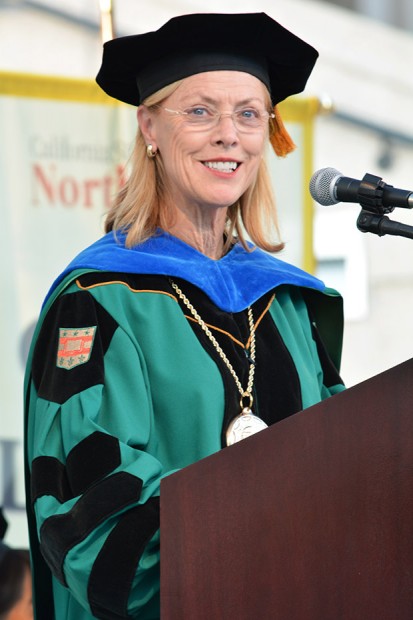 President Dianne F. Harrison has said they will not waiver in their loyalty to the Title IX program. Photo credit: John Saringo-Rodriguez / Photo Editor

On Friday, Education Secretary Betsy DeVos and the Department of Education’s Office for Civil Rights announced its withdrawal of the guidelines that play a key role in helping colleges and universities address sexual violence.

Title IX is the sexual harassment education amendment, addressing sexual misconduct and gender-based discrimination. After this announcement students may no longer have protection from discrimination.

DeVos wants to do away with the Obama era agreement for Title IX on rights for students. The guidelines which were from OCR’s 2011 Dear Colleague Letter on Sexual Violence and the 2014 Questions and Answers on Title IX and Sexual Violence, according to InsideHigher Ed.

But for CSUN students President Dianne Harrison is planning to fight the order and she made a statement addressing it.

“I want to clearly communicate to our campus community that we will not waver in our commitment to Title IX and its protections,” Harrison said.

“CSUN does not stand for sexual misconduct and California’s law and the CSU system has policies (Executive Orders 1095, 1096 and 1097),” according to President Harrison’s letter.

Dr. Rebecca Clark Mane, Communication Studies Department lecturer, said, “The reason that men and women fought to implement Title IX in the 1960s and ’70s was because women were not considered as important or valuable students as their straight male counterparts. It was assumed they were merely at the university to achieve their MRS degree (‘marry a college man’) rather than a BA, MA, or beyond.”

Since 1972, Title IX and certain other federal and state laws stopped discrimination based off of gender or sexual orientation when it comes to university employment and educational activities on and off campus. Even the Chancellor of CSU made a statement with the move that DeVos has made regarding the Title IX ruling.

“I assure you CSU’s existing policies will continue to protect our students and employees, and provide a fair process to all. Our comprehensive policies comply with federal and state laws and regulations — and remain in full force and effect,” said Timothy White, Chancellor of CSU.

Two professors on campus provided their thoughts on the matter for DeVos’s ruling to withdraw from Obama era agreements.

“For Betsy DeVos to disregard this massive collective effort is not to create policy based on fact or efficacy, but rather sends a disheartening and disconfirming message to students,” said Dr. Mane.

According to the Rape, Abuse & Incest National Network (RAINN), 11.2% of all graduate and undergraduate students experience rape or sexual assault. Two years ago there were 26 sexual assaults reported to the CSUN Police Department. CSUN has a Title IX Office where trained investigators and students are becoming aware of where to report and what sexual assault is.

After hearing about DeVos’s stand on Title IX and the way it may affect students, Communications major Bader Alotaibi said, “We have to stand up together and tell people in power that they can’t do that, it is not right. Whether it is male, female, masculine, feminine, we all have to stand together.”

“Withdrawing the 2011 guidelines also weakens the enforcement of Title IX, a law intended to protect all people from sex and gender discrimination,” said Xochitl Alvizo, assistant professor of Religious Studies.

President Harrison’s letter encouraged students to use the resources that are available on campus. From the University Counseling Services to on-campus support groups for women, men, deaf/hard of hearing, other disabilities, LGBTQI and other cultures.

Television Production major Mariana Garcia thinks this is a serious issue because she knows victims, and it’s hard for them to speak about their experiences. “I think [on-campus resources] are beneficial because victims still have memories that they have to carry.”