CSUN faculty senate votes to not comply with Executive Order 1100 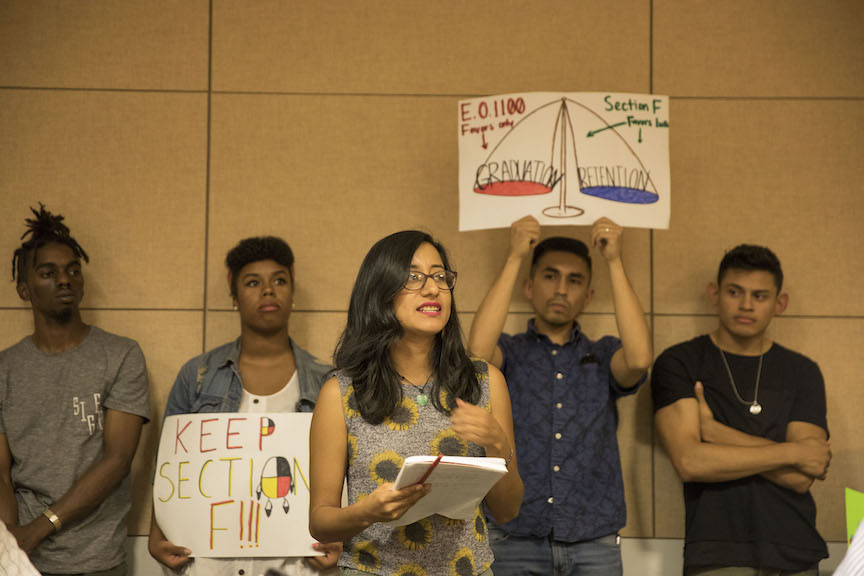 The CSUN faculty senate voted Thursday to not comply with Executive Order 1100. The order would have eliminated a portion of the general education requirement that includes comparative cultural studies.

The vote was taken near the end of the senate meeting after several faculty members and students offered testimonials arguing why the order would be detrimental to the university. However, an immediate motion was passed by executive officer Steven Stepanek to postpone the matter and re-vote at the next faculty meeting.

According to Faculty President, Dr. Adam Swenson, it is uncertain what action that the CSU Chancellor’s office will take if CSUN chooses not to comply in the future. As it stands, the order is set to take into effect in the fall 2018 semester.

Students and Faculty members filled the Ferman Presentation room in the Oviatt Library to express concerns about E.O. 1100. Dr. Theresa White, Africana Studies department chair, gave an address at the meeting and said that it is inevitable that cross-cultural studies departments will be harshly impacted by the executive order.

“This is not an easy fix,” White said. “There are a number of things that we need to take into consideration and we need more time to really think about it and we need some folks for whom this will really affect to be in that conversation.”

The purpose of the E.O. 1100 is to achieve uniformity in graduation requirements across CSU campuses. CSUN is the only campus with an additional GE requirement, section F, whereas the other 23 campuses only have A-E. The order will essentially end section F, a requirement that ensures that students complete coursework in comparative cultural studies.

Swenson and many other faculty members have expressed opposition to the order since it was introduced on Aug. 23. The Chicano/a studies department and the department of history, each have issued statements citing issues with the Chancellor’s decision.

E.O. 1100 has led to sweeping uncertainty around the future of the comparative cultural studies departments on campus because many of the classes they offer are heavily enrolled by students from other majors who take those classes as part of their GE coursework. According to a memorandum provided by the department of history, classes in section F enrolled 9,115 students in 2016, nearly a third of CSUN’s undergraduate population.

One student who attended the senate faculty meeting to protest the executive order said she felt that getting rid of section F would harm students.

“To get rid of section F is essentially an erasure of cross-cultural studies.” said Brittney Washington, a deaf studies major who minors in American Indian Studies. “The campus fought so hard to get these classes and these majors, and to jeopardize them would be really detrimental to our identity and learning experience.”

President Harrison said that the administration would be committed to maintaining its ethnic studies and comparative cultural studies departments and that they would not be decimated under the executive order.

Swenson, White, and Harrison have each indicated that CSU officials have suggested a solution where instead of all classes from section F being completely disbanded, some could “overlay” into other sections of the GE.

Still, it is not possible to predict to what extent the departments will be affected until the order is implemented.

A group of students and Faculty members have been hosting weekly “teach-ins” in the Aronstam Library in Manzanita Hall to strategize on ways to combat executive order 1110 and inform the campus community of updates and possible solutions.

“We want to spread awareness. A lot of people are not talking about [Executive Order 1100]. A lot of people didn’t even know this [faculty senate meeting] was happening.” said Raven Freebird, astrophysics major.

Swenson said that the faculty and students who attended the meeting articulated themselves well and showed the human side of a rather political issue.

“We hope that whatever decision we make going forward, which I hope is not to go forward with [E.O. 1100], will come from an informed place and that we fully understand the implications of this kind of change.” White said.

The next faculty senate meeting will be held on Oct. 26 in the Jackie and Florence Ferman presentation room in the Oviatt Library.

-This story will be updated.