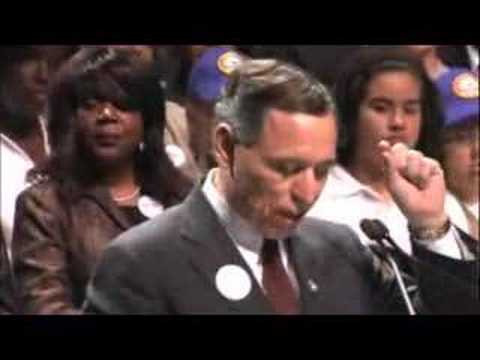 Speaking to a capacity crowd in the performing arts center, Schwarzenegger announced that Karen Baker, a graduate of UCLA who has been serving the Schwarzenegger administration as the executive director of CaliforniaVolunteers, would be the first in the nation to hold a cabinet position dedicated to volunteerism.

“This is a model for the rest of the country,” Schwarzenegger said, adding, “Eventually the federal government will follow.”

As a seven-piece Dixieland-style band danced its way up to the stage, the curtain rose to reveal about 50 volunteers standing on risers.

CSUN President Jolene Koester kicked off the speeches by welcoming everyone to the campus. She was followed to the podium by motivational speaker Lateefah Simon, 30, a MacArthur Genius Grant recipient and long-time volunteer. She warmed up the crowd, getting the audience on their feet to chant, “Ain’t no power like the people of California?Because the power of the people don’t stop.”

Simon introduced Henry C. Lozano, deputy assistant to President Bush and director of USA Freedom Corps. Lozano told the crowd that he has lived in California all his life and said the new cabinet position “is the thing to do in this state.”

Former Pennsylvania Senator Harris Wofford who helped the First Lady’s father, Sargeant Shriver, launch the Peace Corps in 1961 and played a key role in the creation of AmeriCorps also spoke at the event.

Wofford invoked John F. Kennedy’s famous call to service, saying that elevating volunteer service to the Cabinet level was bringing public service it from the periphery to the center.

As he introduced First Lady Maria Shriver to the stage, Wofford said that she was “carrying the torch” of the Shriver family’s public service legacy. He also added that she has a sixth book coming out in April, getting a laugh from the crowd.

Shriver came to the podium grinning broadly, obviously in her element as the audience surged to its feet, cheering and waving the provided banners. She spoke eloquently, paraphrasing Gandhi when she said, “We the people should be the change we want to see in this world.

“Practicing the politics of service” was a value her parents instilled not only in her, but also in anyone who visited their home, said Shriver, “whether they wanted to or not.”

She then introduced her husband by invoking a line from the speech Schwarzenegger gave at his inauguration that referenced the need for volunteers.

“The problems are too great, the challenges are too massive,” she said. “We can’t do it alone.”

After the standing ovation died down, the governor in turn gave the First Lady credit not only for coming up with the idea, but for helping instill in him an understanding of the importance of “social politics.”

The crowd laughed when Schwarzenegger recalled meeting Shriver’s parents for the first time and responding to her father’s query, “So, what do you do?” by saying, “I can lift 500 pounds on the bench press.”

The governor went on to talk about the Shriver family’s influence on his interest in public service saying, “I’d rather do this?than go down another red carpet.”

Some people tried to disrupt Schwarzenegger’s with shouts of “no budget cuts” and other slogans that were unintelligible, but the governor ignored the interruptions and continued his speech.

Two CSUN political science students, both seniors, added a little extra to the “We Serve” signs that had been scattered on various chairs throughout the auditorium. Marguerite Sanvictores and Michael Tammara said they’re both Republicans and big fans of the governor. Sanvictores’ sign was amended with “We Luv U Arnold,” while Tammara added “Conan” to his.

In wrapping up the event, California’s new Secretary for Service and Volunteering, Karen Baker, thanked attendees and said her goal is to “make it easier for people to get involved.” She then echoed Shriver’s “We the people,” statement adding, “Maria has ‘the people’ at the top of every organization chart we create at the (CaliforniaVolunteers).”

She asked everyone in the audience to rise and cheer along with her, “We serve!”

Leading up to the event’s 1 p.m. start, hundreds of volunteers congregated outside of the venue, many wearing their volunteer uniforms, color-coded clothing to represent their organization and their work boots. City Year in yellow jackets, members of the Red Cross in red polo shirts, a battalion of California Conservation Corps wearing blue, yellow and red hats, and California Emergency Response Team members in green vests all gathered outside at the Plaza del Sol courtyard.

AmeriCorps volunteer Candace Bolden, who is in her last semester at Cypress College, is majoring in social work. She said she joined “to get experience in humanitarian activities and community service.”